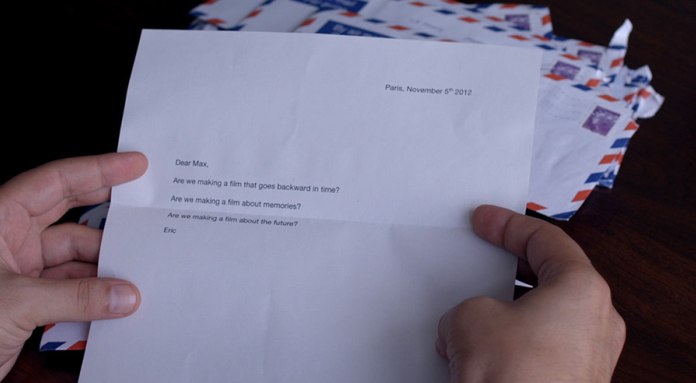 “Abkhazia is something of a paradox: a country that exists, in the physical sense of the word (a territory with borders, a government, a flag and a language), yet it has no legal existence because for almost twenty years it was not recognized by any other nation state. And so Abkhazia exists without existing, caught in a liminal space, a space in between realities. Which is why my letter to Max was something of a message in a bottle thrown at sea.

How do you build a new State? Does the State include? Does it exclude? On what criteria can a State be considered to exist? And what forms of representation allow, or prove, this existence to be “real”? If all States are fictional collective constructs, what to make of Abkhazia: a fiction within a fiction?

Abkhazia seceded from Georgia, in the Caucasus, during a civil war in 1992-1993. Like all disputed lands, Abkhazia is entangled in a conflicted narrative. To many Georgians, the breakaway State is a rogue nationalist regime, an amputated part of Georgia. To the Abkhaz, independence saved them from cultural extinction after years of Stalinist repression and Georgian domination. To many observers, Abkhazia is simply a pawn in the Great Game Russia and the West have always played in the Caucasus. “The Secession Sessions” acknowledges these competing narratives and does not seek to write an impossible objective historiography. It does not parse, verify or document any competing claims to a land. The project starts with this observation: Abkhazia has had a territorial and human existence for twenty years, and yet it will in all likelihood remain in limbo for the foreseeable future, which makes the self-construction of its narrative something worth exploring. If Abkhazia is a laboratory case for the birth of a nation, then its Garibaldis and George Washingtons are still alive and active. Maxim Gvinjia is one of them.

When I dropped an envelope in a mailbox in Paris a year ago, I fully expected that a letter addressed to Maxim Gvinjia, former Minister of Foreign Affairs, Sukhum, Republic of Abkhazia, would come straight back to my studio with the notice “destination unknown.” But to my surprise, ten weeks later, I got an email from Max telling me he had received my letter, but could not reply on paper since the post office in Abkhazia cannot handle international mail. I have no idea how or why my letter arrived.” Eric Baudelaire 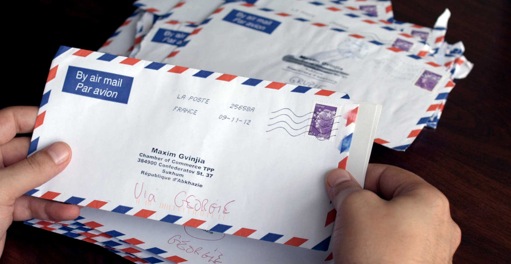 “The Secession Sessions” is conceived as a series of invitations, initiated by French artist Eric Baudelaire, to investigate the question of statehood through the prism of the stateless state of Abkhazia. The exhibition is composed of various elements: regular public office hours at the Anembassy of Abkhazia created at Bétonsalon for the duration of the exhibition, and staffed by Maxim Gvinjia, former Foreign Minister of Abkhazia; daily screenings of a new film by Eric Baudelaire titled Lost Letters to Max; and a program of talks, public events and classes with scholars and artists from various backgrounds, exploring the issues at stake in “The Secession Sessions”.

LOST LETTERS TO MAX
A film by Eric Baudelaire with Maxim Gvinjia
Screenings from Tuesday to Friday at 3pm and 5pm, and on Saturday at noon

Each day, the film Lost Letters to Max will be projected. The methodology of the film came from serendipity: sending the first letter was a kind of joke, a wink to the world of Alfred Jarry’s Ubu Roi that Maxim Gvinjia seemed to inhabit. But fiction has penetrated the real. And so Eric Baudelaire launched on a letter writing campaign, 74 letters sent over 74 days, a script for a voiceover to a film in which Max becomes the narrator. The film will be structured by this exchange: letters that should not have arrived and yet somehow reached Max, his recorded responses, and images that Eric Baudelaire filmed in Abkhazia once their correspondence ended.

THE ABKHAZIAN ANEMBASSY
With Maxim Gvinjia, former Foreign Minister and Anambassador of the Abkhazian Republic in Paris
Open from January 9 to February 8, from Tuesday to Saturday, 11am to 3pm and on Saturdays from 11a m to noon

Every day, Maxim Gvinjia, the Anambassador, will hold regular office hours at Bétonsalon. He will make use of the space as he pleases. He may host events, greet visitors, hold discussions and invite guests. The Anembassy is a performance (can it be called anything else?); it is not official and it has no function in an operational sense. It will operate as a ritual that is both real (after all, Max was Foreign Minister) and a fiction, but a fiction meant in a very political sense: fiction as a territory of resistance for those who are given no space in the real.

THE SATURDAY SESSIONS
On Saturday at 3pm

A program of weekly Saturday afternoon talks, public events and workshops, with scholars and artists exploring the issues at stake in “The Secession Sessions” beyond the question of Abkhazia per se.

This exhibition is a coproduction of:

In partnership with Kadist Art Foundation