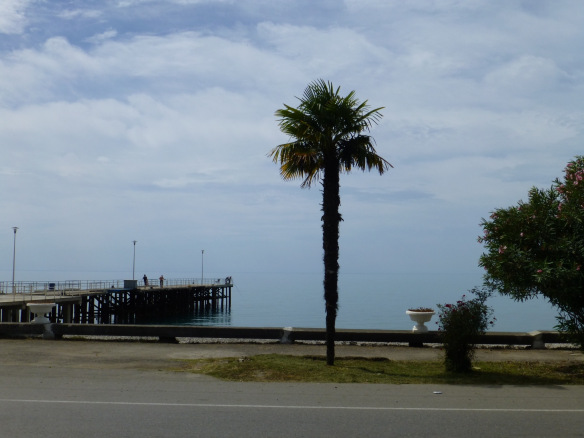 We are sitting under vine leaves, listening to the frogs and watching the night gradually draw in as the fire flies start their flickering dance. He was born in this house, he mimes. It was built by his father. Brick by brick. Both his parents were killed during the war of 1992-3, as was his first wife and many of his friends and comrades. He fought himself as an officer. He doesn’t speak English, and his Russian wife, Irina, whom he married only recently, either doesn’t want to translate, or doesn’t know how to convey the intensity of feelings. Or perhaps he doesn’t really want to talk about it. ‘Daour says it was awful. Awful.’, is all Irina says, as she shakes her head and looks down at her hands. Silently.

‘It dominates everything’, Julia says. ‘Every time people meet, whether with friends or in meetings with organisations. It always comes up.’ The war. The fact that people lost so many friends and family. ‘It cannot be forgotten’, she continues. Not yet. We are looking out over the smooth and calm, blue Black Sea where a pod of dolphins is hunting for fish about 100 meters off the coast. She is only 20, but with her fellow student in International Relations, Olga, she has big plans to help her country grow. They want to set up a tourism and business consultancy. ‘This is such a beautiful country, with beautiful landscapes and with so many opportunities’, they both say. ‘People just need to know about it.’

She speaks with a youthful certainty. About their plans. About independence. ‘People are now starting to realise we had to become independent. We speak a different language, we have a different history, we are different people.’ And even though she has one Uzbeki and one Russian parent and has spent her childhood in Uzbekistan, having lived in Abkhazia for only 8 years, she clearly includes herself in that history. With that one statement, she makes a claim for cultural and ethnic difference, and at the same time making a case for a multicultural Abkhazia. ‘As long as you feel you are Abkhazian and support the country, you can be Abkhazian’, she says. I tell her about the kind and warm hospitable people I had met in Gali and how Mingrelians there live together with Abkhazians. Even though in an ideal world, they would prefer to still be part of Georgia, their main concern is to live peacefully together, I said. She didn’t respond to the latter. ‘If they want to live here, they should take on the Abkhazian nationality, not remain Georgian’, she insisted.

Her enthusiasm seems in conflict with the backdrop of ruins, especially of larger buildings and former prestigious structures, such as hotels, the railway station, and the old administrative building of the Georgian government. That one is kept abandoned, as a reminder of Abkhazian victory. But she is right. It is a beautiful place. Not just because of the contrast of the snow capped mountains in late May, the subtropical plants and trees and the empty pebble beach gently touched by an aquamarine blue sea. Its beauty lies in the contrast of the rusting piers, the deserted emptiness of the ruins and the will of the people to survive. You can see it in the small kiosks selling sweets and cigarettes at street corners. You can see it in the potholed gravel streets, which seem perpetually filled with puddles, lined with planted flowers. And you see it in the bazaar, where the freshest, high quality produce is sold – products of small scale eco friendly farming.

The pain of loss, and perhaps of having inflicted loss, cannot be forgotten. As Julia said, it dominates everything. Indeed being introduced to Daour’s neighbour, almost one of his first questions was, who do you think is right Abkhazia or Georgia? Of course, I couldn’t answer. But what I do know is that I have fallen in love with this strange, compelling, beautiful and fragile place, north and south, full of ruins and remnants of the past coupled, with a youthful and hopeful look towards the future. I could live here. For a while anyway.