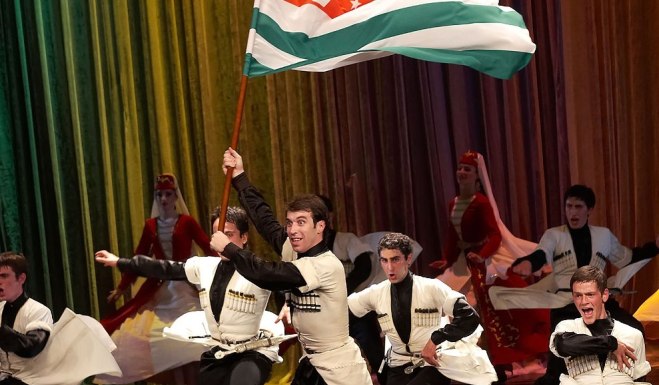 Below is a list of dates and venues for the folk-dance group to perform in Turkey:

The skill of the State Ensemble of Folk Dance ''Caucasus'' of the Republic of Abkhazia is fascinating, inspiring and admirable. Its repertoire includes dance heritage of many peoples of the Caucasus

Established 15 years ago in memory of the sons of Abkhazia, killed in the days of the Georgian-Abkhaz war of 1992-93, and volunteers from the Northern Caucasus and Southern Russia, for many years the ensemble united the best dancers of the Caucasus, arrived in Abkhazia at the invitation of the founder of the ''Caucasus''. Members of the ensemble professionally and with inspiration convey peculiarities of each dance of the peoples of the Caucasus - Abkhaz, Adyghe, Ossetian, Daghestani, etc.

The ensemble ''Caucasus'' is the offspring of the People's Artist of USSR and the Republic of Abkhazia, holder of an order ''Akhdz-Apsha'' of II degree Kandid Tarba, for whom choreography has become a profession, meaning of life and the most important thing. Being a bright dancer, brilliant choreographer, skillful organizer, he has long been famed in the Caucasus and beyond. Kandid Tarba was a dancer, then chief ballet master in the State Ensemble of Folk Song and Dance of Abkhazia for more than 10 years.

The audience loved the ''Caucasus'' from first concerts. Already one year after the creation the ensemble went on its first tour to Turkey, which passed with a triumph. In 1996 the ensemble won the main prize of the International Youth Festival in Volgodonsk - a gold medal. On the eve of 1997, took place a successful tour in the North Caucasus republics. In 1999, was held a concert in Moscow, at the Concert Hall named after Tchaikovsky; the ensemble took part in an international folk festival of European states in Germany, in Balingen. In the same year, to the biography of the creative group was added brilliant success achieved at the XIII International Festival of Folk Dance in Turkey ''Bursa-99'', where performed the teams of more than 20 states. The ''Caucasus'' took the first place and the traditional prize - ''Karagöz''.

In 2003, the ''Caucasus'' participated in the celebratory concert in St. Petersburg in honor of 300 anniversary of the northern capital, after which by Decree of RF President V. Putin Kandid Tarba was awarded a medal ''In memory of the 300th anniversary of St. Petersburg''. At the end of that year, the group went on tour again - through the cities of Tatarstan.

For 15 years of existence, the ensemble has held numerous concerts in the cities of Southern Russia and in Abkhazia. The World Artiysky Committee, the World Assembly of Recognition awarded a gold medal and Diploma with conferment of the title of laureate of ''Artiada of people of Russia 2003'' to the ensemble ''Caucasus'' and its leader, K. Tarba for mastery, preservation of folk traditions, strengthening inter-ethnic and cultural relations between Russia and Abkhazia.