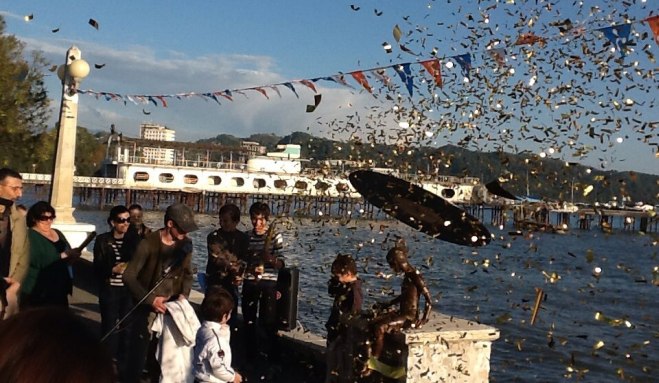 SUKHUM -- On Sukhum’s Promenade of the Mukhadzhirs the bronze-sculpture of the girl Nika, one of Fazil Iskander’s characters, has been unveiled. She is set next to the statue of another hero of the famous writer’s works, the boy Chik.

The idea of producing the sculpture belongs to journalist and photographer Ibragim Chkadua; its creator is Arkhip Labakhua. The sponsor of the project was the company Aquafon. "Now Chik has a friend," said Arkhip Labakhua. The creator worked on the sculpture for a month, and, according to him, this is for him a long process. "I simply couldn’t work out how it should look. Ibragim sent me photos of different girls. In the end, I did not settle on one specific face but on the collective image of a pretty girl," Arkhip Labakhua related. He remarked that Fazil Iskander knows about the setting up of Nika, having seen both sketch and finished sculpture. A live web-cast of the ceremony to unveil the sculpture involving the writer had been planned, but because of his state of health implementation of this plan had proved impossible.

At the unveiling ceremony, the President of the Union of Artists of Abkhazia, Adgur Dzidzaria, congratulated the citizenry on the notable event. "Nika brings to the atmosphere of the Promenade a pleasant, subtle, lyrical tone," he said.

In the words of the author of the idea, Ibragim Chkadua, it was a little sad to see Chik all alone. “He was bored here all by himself. Now the gender-balance has been observed!” he joked. “Fazil has the phrase ‘the lost paradise of childhood’, and, look, through these sculptures of Arkhip, this paradise fleetingly returns to us. Thank you, Sipa (as close friends call A. Labakhua — AP) for having preserved this harmony in yourself. Thanks to all who helped him — the city-administration, Aquafon and the Artists’ Union." To the sound of old romances, Arkhip Labakhua and his younger son removed the white canvas from the sculpture. And in front of a large audience, among whom was even the First Deputy-Prime Minister, Indira Vardania, the girl Nika made her appearance. She sits on a pedestal; in front of her is a gramophone which she is winding up. Above her is a huge disc, which will serve her as an improvised protection from both the scorching rays of the sun and torrential rains. Young members of the children’s dance-ensemble “Abaza” danced at the unveiling ceremony for the girl Nika, for the lad Chik, and for all the citizens. 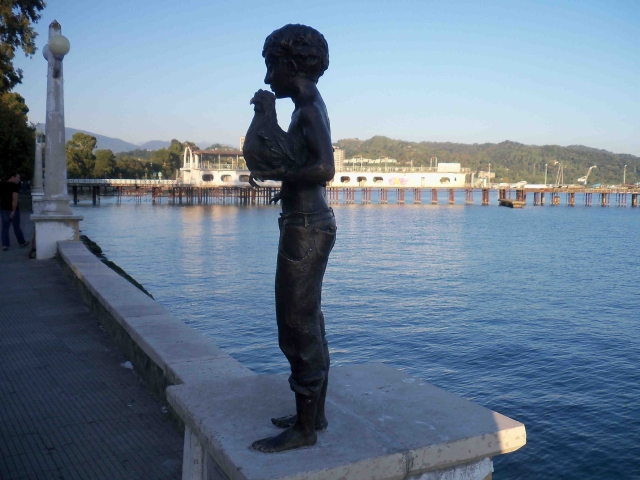