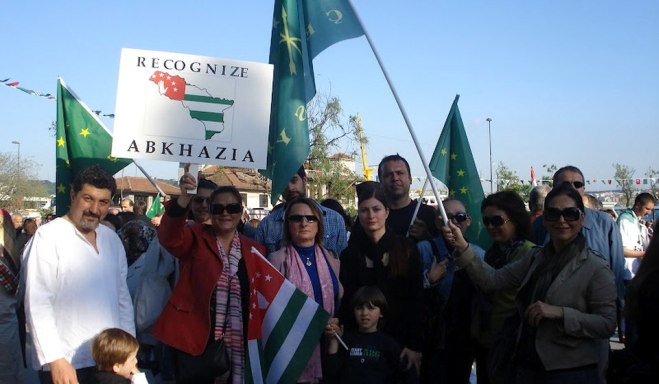 I am not sure, but presumably so as not to annoy Georgia. Perhaps to Putin. The answer to this question was clear until a few years ago; it was unthinkable for Turkey to legitimise Abkhazia, which had separated from Georgia, as long as Turkey’s own troubles with the separatist Kurdish movement continued. In Turkey’s eyes, the Abkhazians were separatists. Nation-state paranoia.

The modest humanitarian aid Ankara provided during the war was limited to food, medicine, etc. Never mind recognition, the former government didn't even look positively on a small ferry service between Samsun-Trabzon and Sukhum. It made a few trips, but then it was abolished. The rationale was that the Georgians objected.

This is related to the obsession of nation-states with territorial integrity. If I indulge her separatists, she might sympathise with my separatists. That's the problem.

That was the reason why Turkey turned a blind eye to the victimization of minorities in neighbouring countries. Because it was behaving badly towards its own minorities. I have tried to say this very politely.

Moreover, Turkey didn't have either the power or the foresight to show an interest in those countries. They couldn't speak out even on behalf of the Uygur Turks who were persecuted in China, or the Gagauz Turks who were exiled from one place to another in Russia. It was all about the Turks of Western Thrace. Turkey had already severed links with the Greeks and probably regarded ‘evil’ Greece as a pushover. Things have not been like that in recent years. [Turkey] opposes the coup in Egypt, tells Assad to get out. This is new. Completely ignoring the Iraqi Prime Minister. Slams the UN Security Council openly and says "The world is more than five". Announces within an hour after the typhoon that it is ready to give aid to Philippines, but there is no ‘emerge on Abkhazia’.

Turkey's position is to keep Abkhazia dependent on Russia. The same holds true for the Georgians. They keep Abkhazia in thrall to Putin by seizing even small ships of 500 tons departing from Abkhazia. And Putin checks every person who is going to Abkhazia and lets whoever he wants [do so] and deports the ones that he doesn't want after holding them in custody for three days. [He] doesn’t allow former Finance Minister Zekeriya Temizel and journalist Fehim Tastekin to visit Sochi. They also refused entry to Cihan Candemir, the former president of Federation of Caucasian Associations (KAFFED).

Putin is happy with this situation, the Abkhazians are unhappy. (At least the Turkish Abkhazians).

There are already only a handful of Abkhazians there with its 70,000 population. There are around 300,000 here. So they could have met, talked easily, without seeing the Siberian wolf-eyed Russian custom guards. Can't you do that, Mr [Ahmet] Davutoglu [Turkish FM]? If you say no, what do you have that you can give us? You, or your subordinates, made a fuss when Kartal [a district of Istanbul] wanted to become sister towns with Sukhum. Why is that? And this is not the first time this has happened. As far as I know, Sukhum and Sakarya are sister cities - actually I have no idea what it means, this sistership.

Look, these Circassians - Abkhazians believe asking for something is indiscreet. Perhaps you [already] know this, but I wanted to remind you in any case.

This article was published by "Gusips" and is translated from Turkish.