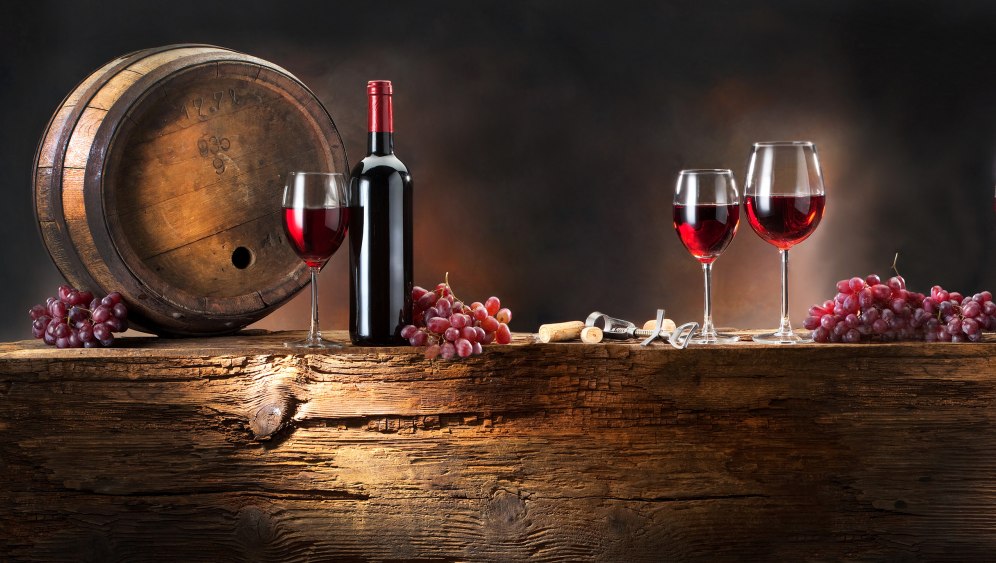 Throughout history, Abkhazians have considered wine to be a divine gift to people.

The Abkhazian love affair with wine dates back centuries. Among the archeological discoveries that confirm this ancient wine culture are pitchers containing grape seeds that date back to 3000-2000 B.C. and a bronze statuette found in the 1950s in the Bombora settlement of the Gudauta region (a man holding a huge wine horn; scientists date the statue back to about the second millennium B.C.). A drawing of this statute is found on the label of the popular Apsny wine brand.

Clay jars buried underground for wine conservation and aging were used in the West Caucasus as far back as 8,000 years, according to archeologists. This method of storing wine was believed to infuse it with a delicate flavor. The biggest wine container discovered in Abkhazia was almost five feet high and 3.2 feet wide. It could hold 53 gallons of wine. The tradition of burying wine is alive even today: ceramic jars can be found in almost every Abkhazian household. The healing powers of wine are well known to Abkhazians, so don't be surprised if you are invited in for a glass of good refreshing wine during a visit to an Abkhazian home.

Abkhazians, in a tongue-in-cheek manner, divide their wine into "men's" and "women's" wine. The first is ripe, sharp, and elegantly temperamental; the second is sweet, light, with a pleasant aroma of berries and it is tightly sealed in barrels right after fermentation. 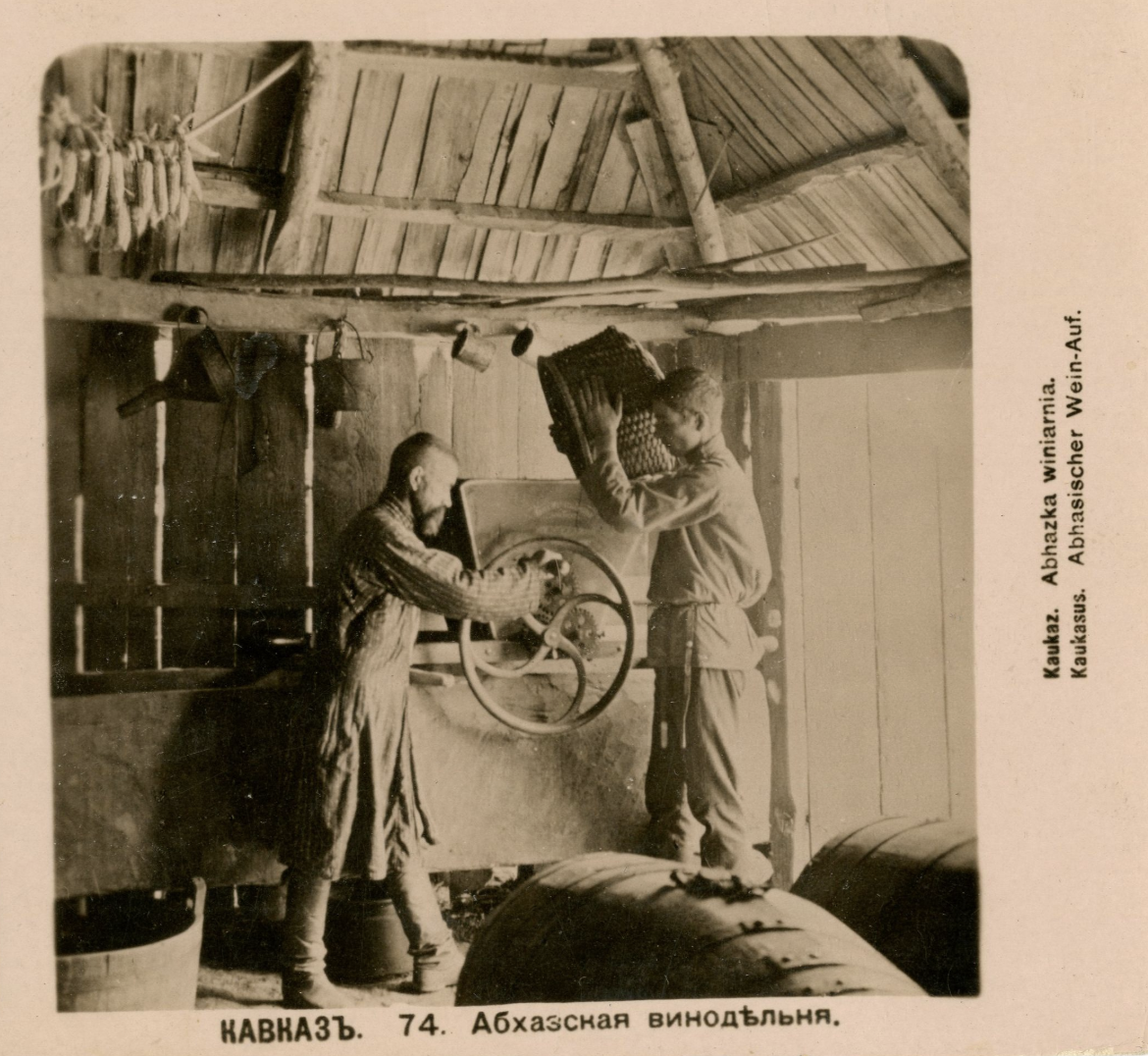 Due to the climate, which, it seems, was created for the prosperity of wine growing, there are scores of varieties of grapes cultivated in Abkhazia. Some of them can be found only in Abkhazia. The rugged terrain, the diversity of soil, and the hot sun, together with the unique microclimate, cause the grapes to ripen up to the end of November, reaching their maximum sweetness. Vineyards are planted on the slopes of steep mountains, in valleys, and on the plains at the very edge of Black Sea. Due to the great diversity of microclimates and soil qualities even one variety of grapes grown in different areas can produce wines of a distinct taste and aroma.

The wine grapes are harvested between October and December, depending on the variety. In Abkhazia winemakers usually let vines grow on trees (mulberry or walnut), because it winds around the tree trunk and branches and reaches the sun to absorb its heat, and fill up with juice, sugar, and aroma.

The wine-making business in Abkhazia is conducted by men. The grapes are crushed to extract the must, which is deposited in a wooden vat with a small opening in its bottom. The opening is closed for three or four days -the time of the must fermentation. After that winemakers let the fermented wine leak through the opening into a different container. From there, they pour it, without any flavor additives, into big oak barrels or ceramic vases for further storage and aging.

There is another traditional drink that is produced from grape juice: a famous vodka called Cha-cha, a highly valued drink in Abkhazian folk-medicine. It can also be produced from figs, cherry plums, plums, pears, and other fruits and usually goes with nuts and fruits as an aperitif before the main course. But the "real" Cha-cha should contain 50 to 70 percent alcohol and should be produced from grapes. 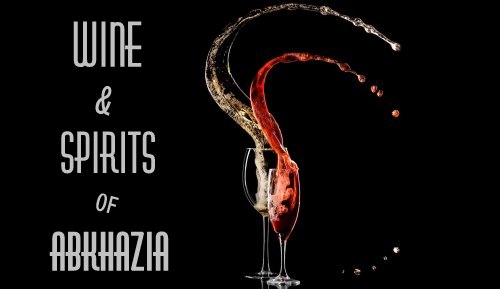 Throughout history, Abkhazians have considered wine to be a divine gift to people: it brings joy, cures the body, boosts spirits, and, if it is a good wine it is a "balm" for the soul. Wine is a traditional Abkhazian drink. For ordinary meals or for feasting, Abkhazians prefer a natural black wine made from Isabella grapes, or less frequently from other local varieties of grapes. Wine plays an important role in religious and secular celebrations.

For every Abkhazian feast (except funerals) the toast-master, one of the most honorable men, is selected. There are a number of toasts that are compulsory for every feast, and their hierarchy and order are very strict. Every feast starts with the ritual toast, in which Abkhazians always address God asking to send goodness upon them, saying literally, "Lord Almighty, grant us with the warmth of your eyes." At the beginning of every toast they also ask God to bless the subject of the toast. The most important toasts -the first for the people, for Abkhazia, for elders -are always made while standing. At the same time, while raising their glasses, younger people should demonstrate respect to elders by holding their glasses a little lower.

Abkhazians celebrate the New Year on the night of 13 January , based on the old Julian calendar. On that evening, a ceramic vase with wine is opened and a goat or a rooster is slaughtered. Home-made cheese pies and other delicacies are served. The head of the family strings pieces of the boiled liver and heart of the slaughtered animal on a small wooden spit, pours wine on it, and addresses God with a prayer asking for blessing, health, and happiness for his family. Then, everybody gets a piece of the "blessed" meat and a glass of wine. The decanter with home-made wine from the vase is an essential part of the feast. Red wine is preferred: the belief is that red wine invigorates the body and rejuvenates the blood. On the next day neighbors and friends gather around the festive table, and everyone joins in the celebration.

A word of warning to unsuspecting visitors

It is important to note, that the culture of wine-drinking in Abkhazia requires the feast participants not only to demonstrate their rhetorical skills. They must also be able to drink without getting drunk and finish the feast with dignity, even if you have just consumed twenty glasses of wine. In the epilogue of the Abkhazian feast, the heroes of which either "crumble" or reach the pinnacle of their fame, there is a final horn. It is brought up by the master of the house as a rod of a feast power. Usually it is a horn of a buffalo or a bull, but sometimes in contemporary households the horn is made of crystal. The final horn is drunk in honor of the organizers of the feast by some braveheart, who feels capable of pouring in two extra pints of wine and giving a heart-felt speech. The path between the first toast-prayer to the last horn is a long one, and it usually continues long into the night. People leave the table leisurely, demonstrating to each other the firmness of their stride. They say good-bye to the hosts - till the next feast.

Cotemporary Abkhazia consists of a distinctive Abkhazian culture that melds modernity and treasured old traditions, stately songs, and dances. While visiting Abkhazia, you will be introduced to these traditional foods and home décor. In traditional Abkhazian homes called, patzha, you won't see much of the usual furniture to which Europeans are accustomed. Horns of bulls or deer, animal skins, garlands of red pepper, onions, and corn- these are the main elements of interior decoration. A fire burns on an earthen floor; meat is frying, cheese is being smoked, abysta (a thick corn mash) and beans are slowly boiling in a kettle. National restaurants built in the style of patzha are now widely spread in Abkhazia, so you will have an opportunity to be introduced to the traditional Abkhazian way of life.

Every guest is looked upon as God's grace, for a guest brings seven happinesses to the house, one of which is the joy of a heartful and friendly interaction at the table. Welcoming the guest, the hostess pronounces a special phrase and makes a circle around guest's head with her hand. This way she "magically" transfers all his ailments and hardships on herself.

A guest will always be offered the best there is in the house: aromatic smoked meat fried on heated coals flavored with herbs and a scarlet tear of pomegranate; fresh cheese with adzhika, smoked cheese, ruddy churek (pita), spicy greens, nuts in a sweet coat made of grape juice, fresh vegetables, and a jar of Isabella. Healthy food, glorious scenery, mutual respect, and a friendly environment will give you a glimpse of the famous Abkhazian longevity.

Contemporary industrial wine production in Abkhazia began in 1925 and reached its peak between 1960 and 1990. During this time about 3,700 acres of land were turned into vineyards, and the legendary brands of wine such as The Bouquet of Abkhazia, Psou, Lykhny, Apsny, and Anakopia were created. These wines were honored by prestigious awards at international wine fairs and enjoy great popularity both in Abkhazia and far beyond.