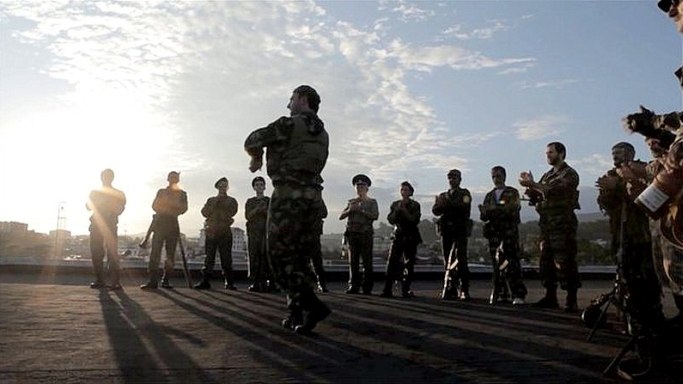 SUKHUM -- In anticipation of the nineteenth anniversary of the Victory in the Great Patriotic War of the people of Abkhazia, the AQUAFON company is organising in the towns of the Republic a showing of the film dedicated to the memory of the First President of the Republic of Abkhazia, Vladislav G. Ardzinba "Hara Harwaa Reihaby”.

"Hara Harwaa Reihaby” is a musical film in which there is a collection of songs which were born in one of the most challenging periods for Abkhazia, the period when not only the future of the country but the very future of the nation found itself in question.

The film incorporates a military chronicle: right at the start their authors and first performers sing military songs. These archival sequences are combined with staged shots of the same songs but now in performances by descendants of the heroes who gave their lives for Victory.

Realisation of the project "Hara Harwaa Reihaby" was facilitated thanks to funding by the companies AQUAFON and "Wines and Beverages of Abkhazia".

The film premiered in Sukhum on 14 August 2012, the day of the 20th anniversary of the start of the Patriotic War of Abkhazia.

"Considering it to be its duty to provide an opportunity to see the film to residents of other towns in the Republic, the AQUAFON company has taken the initiative in showing the film in towns of Pitsunda, Gudauta, New Athos, Tkuarchal, Ochamchira and Gagra," was the information given to Apsnypress in the company’s department for external communications.

Over the course of a month, the film-makers, Emma Khodzhaa, Timur Kuchberia, Anri Gumba, and Alkhas and Almaskhan Markolia, together with staff of AQUAFON, have been visiting the towns of Abkhazia, introducing viewers to the film, talking about the shooting and the most interesting aspects of the process involved in the work. The first town in which the film was presented was the hero-town of Gudauta. On 12 September, many spectators gathered in front of a large screen in the centre of the town. The film aroused great interest among those who had gathered, amongst whom were representatives of both the older generation and the young.