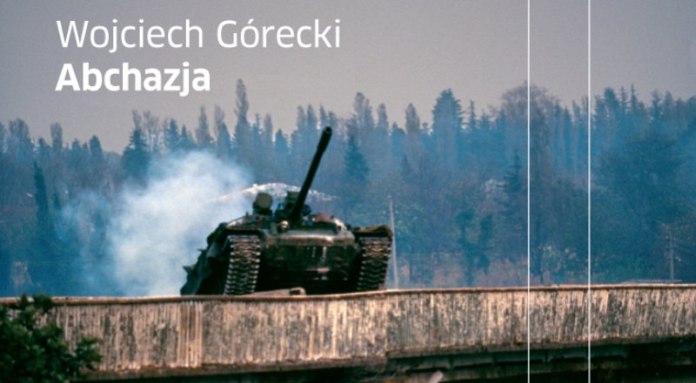 Abkhazia is like a tangerine – exotic, multi-layered and juicy. Each of its little segments seemingly alike, yet different; and it is easily divisible into pieces. Such is, also, Abkhazia by Wojciech Górecki – juicy and multi-layered. A history of this para-state, the leading exporter of tangerines to the Russian market, is much more than just an overview of the author's journeys to the Caucasus. Abkhazia also becomes a bitter resume of his life as a reporter and is definitely the most personal part of the reporter’s trilogy.

Górecki’s fascination with the Caucasus is compiled into three books: Planet Caucasus, A Toast to the Ancestors and Abkhazia (To read a review of both books, see New Eastern Europe Issue 1(I)/2011; “Ridge and Border” by Jacek Borkowicz). The latter is a collection of Górecki’s notes from his numerous visits over a twenty-year period to this land spread between the sea and the mountains. It is a peculiar record, depicting the author’s struggle with the history of his own travels to the Caucasus. Why is it that Abkhazia should finish the trilogy? Because it is the land of forgotten legends, a cultural and ethnic melting-pot, a tiny spot on the world map fighting for its right to self- determination.

Abkhazia is one of several para-states on the territory of the former Soviet Union. The European Union considers it a part of Georgia and its independence has only been recognised by Russia, Nicaragua, Venezuela, Nauru, Vanuatu and Tuvalu. Abkhazia has its own president, government and military. Its air force consists of one helicopter, its navy is a fishing boat under the command of a zealous amateur actor, Ławnik Achba. It is the land of the Abkhazians – highlanders and sailors; and geographically it is a link between the Mediterranean world and the Caucasus.

One of many trade routes on the historic Silk Road, 19th-century Abkhazia was turned into the Suchomska Military Road by the Russians. Górecki searches for the sources of Abkhazia's independence, the foundations of its statehood and religion; and he tries to discover the truth. The people of Abkhazia speak of independence in many different ways and fight for their freedom by invoking history. It is not just the Abkhazians and Georgians whose interests are all mixed-up in this multi-cultural melting-pot. There are also Chechens, Cabardians, the highlanders of Dagestan, and the Ingushians who assert their rights in Abkhazia. This land on the Black Sea is home to both those fighting for independence and those seeking refuge in the aftermath of wars. Górecki takes a closer look at the refugees – the inhabitants of the borderlands. Stories of people with uncertain national identities are interspersed.

Ironically, some of them view their homeland from quite a distant perspective. Fazil Iskander, one of the most important Abkhazian writers, and considered a potential Nobel Prize winner by some literary specialists, is one striking example. A long-standing inhabitant of Moscow and the author of books written in Russian, he has been fighting for Abkhazia on the international scene. Through his words, he breaks down barriers that no other emissaries have been able to reach.

Górecki’s discussions on religion illustrate the complicated issues that exist in the unrecognised state. Quoting scientific data, Górecki has found that 80 per cent of Abkhazians are members of the Orthodox Church, 20 per cent are Muslim and 100 per cent are pagan. Take the politicians for example – those who currently run the country and the opposition. It isn't the current authorities of Abkhazia which is going to decide the future of this para-state. Rather, it is Russia which is in control of political order in this region. And Georgia isn't going to let Russia take away what they consider to be part of Georgian territory. This complicated history of political and freedom movements and mutual inter-state relations is presented by Górecki in a surprisingly lucid manner.

The book mixes different genres, from travel journal to literary column; from descriptive passages of a city to a historical sketch. The author intersperses dialogues with notes taken during his trips. The meetings are short and the interlocutors are crude; although not particularly talkative as, according to the author, the Abkhazian soul is difficult to penetrate. The Abkhazians appear to be the least spontaneous of all the Caucasian peoples. Perhaps it is their way of demanding more attention and their reserve which is supposed to increase journalists’ interest in this region.

The author also brings us on a journey to look for Polish traces in Abkhazia. It is with true dedication that Górecki writes about the story of Jan Godawa, a Pole who fought during the Georgian-Abkhazian war on the side of the Abkhazians; or Teofil Łapiński who fought against Imperial Russia in the Caucasus in the 19th century. Many Abkhazians born in the 1950s carry Polish names: Stanisław and Teofil appear quite regularly.

In the last part of his Caucasian trilogy, Górecki also presents the story of himself. In the early 1990s, we encounter a young student attempting to write two university dissertations, a traveller to the East, a writer and researcher on this region. He asks questions but doesn't always come up with the answers – and thus, digs deeper. He uses every possible opportunity to travel to the East. The Abkhazian-Georgian war of 1992-1993 is the first military conflict in which Górecki worked as a war correspondent. As time passed, his work presented him with even more questions, more enthusiasm and more opportunities. And his collection of books is one which could be found in a second-hand bookshop in Russia.

Górecki finishes Abkhazia on a personal note. When he arrives at a conference in Yerevan, sponsored by the Parliamentary Assembly of the United Nations, he is already in his forties. He is a man of the world, wearing a suit and a tie. During the past 20 years, the  student became a lecturer, and the reporter became a researcher at the Centre for Eastern Studies. There is no need for him to plan anything any longer. Each detail of his trip is now scheduled for him – from the flight from an airport in Poland, to his stay at the Marriott Hotel in Yerevan. He doesn't need to search for topics – as a conference participant, he presents topics for discussion. And he sets a trap for himself; realising this when he sees a boy selling pictures in front of the Marriott Hotel. Górecki admits that: “One cannot get away with playing two different roles, mixing two different orders. One cannot be both a man of the world and a globetrotter at the same time. One cannot sleep at the Marriott and remain a reporter.”

Some time ago, at the beginning of his journey, in the first chapter of Abkhazia. He stayed in a run-down sanatorium building called Chernomoryetz, where he warmed himself up with alcohol, lived on canned food and wondered whether he would wake up in the morning. As time went by, he switched from places without electricity to the comfort of world-class hotel chains, and from telling the stories of local people to scientific analysis of the socio-political situation. And although this punch line might seem bitter, it is what makes Abkhazia the juiciest fruit of Górecki’s work as a reporter.

Łukasz Wojtusik is a Polish journalist and radio reporter. He is the head of the Krakow office of the radio program TOK FM.