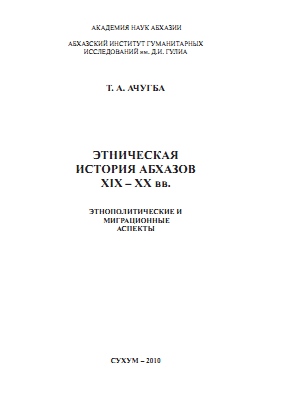 The full book in PDF can be downloaded by clicking here (1.92 MB)

T.A. Achugba
The Ethnic History of the Abkhazians
in the  XIX-XXth Centuries.
Ethno-political and migrational aspects
R e s u m e

The path of the ethnic history of the Abkhazian people has been especially complex and thorny. Regardless of the military-political, socio-economic, religious, and ethno-cultural attacks from different world-powers over many centuries, upto the moment of Abkhazia’s entry into the Russian Empire (1810), the whole population of historical Abkhazia retained its general Abkhazian ethno-cultural identity. The self-designation of the population of this region is Apswa. From this is derived the self-designation of the country of their habitation, namely Apsny. The Abkhazians have been, and are still today, united by a single language, the memory of a common origin, common ethnic customs, habits, traditions, a shared socio-economic structure and socio-familial lifestyle, general Abkhazian toponyms, hydronyms, and anthroponyms.

Thus, with the ending of the Russo-Caucasian War (1817-1864) and the abolition of Abkhazian statehood, tsarism began the further realisation of a plan to deport the ‘untrust-worthy’ core population of Abkhazia. Irreparable damage was done to their gene-fund, language and traditional culture through the mass-resettlement of the Abkhazians beyond the frontiers of their historical homeland. The people suffered a humanitarian catastrophe.

As a result of the emptying of the majority of the regions of Abkhazia (Sadzen, Pskhu, Gama, Dal, Ts’abal, etc...) of the core population, the country became the object of mass-colonisation. Abkhazian lands began to be actively settled by representatives of different peoples living in the Russian Empire and beyond its borders. However, the plans of sovereign Russia to settle Abkhazia and, ultimately, the emptied lands of the Caucasus with a predominantly Russian population as the most trustworthy contingent in military-political matters was not crowned with success. Due to various circumstances, the residents of contemporary Western Georgia skilfully took advantage of the developing situation to start intensively moving into Abkhazia.

In the process of taking over the lands emptied of the Abkhazians and other core peoples of the Caucasus, an imperial mentality took shape in Georgian society, which spurred them on to a demographic expansion inside Abkhazia, to the assimilation of the Abkhazians who had avoided expulsion, and to the appropriation of their motherland.

Research into the ethnic processes that took place in Abkhazia in the second half of the XIXth and the beginning of the XXth century has revealed that the aims of the Russian authorities in the matter of assimilating the Abkhazians and as regards the settlement of Abkhazia by Russians met with failure — in Abkhazia, instead of the russification of the indigenous people, there began to be traced processes of their georgianisation (via mingrelianisation). And all because the Russian authorities, even after the deportation of the major part of the Abkhazians, continued the policy of ‘assimilating Abkhazia’ via Tiflis with the help of Georgian lobbying of the Caucasian viceroy. The process of georgianising the Abkhazians was helped also by the further complication of Abkhazo-Russian relations in connection with the deportation of the Abkhazians and their being unjustifiably charged with being a ‘guilty’ and at the same time ‘temporary’ population in their very own Homeland.

The discriminatory policy of the tsarist authorities in relationship to the Abkhazians led to the Abkhazians starting to place greater trust in the neighbouring Mingrelians and Georgians than in the Russians. However, at the turn of the XIXth and XXth centuries when it became clear what practical steps were being taken by the Georgians for the demographic annexation of Abkhazia’s emptied lands, for the georgianisation of the Abkhazians, and, finally, with the revelation of the political goals of the Georgian people’s spiritual fathers to incorporate Abkhazia within the frontiers of a future Georgian state, all of these factors gave rise to the Georgian-Abkhazian ethno-political conflict, which has already gone on for more than a century. From this period the ethnic history of the Abkhazians has to be seen within the direct context of a stand-off between Georgians and Abkhazians.

With the lifting from the Abkhazians of the label of a ‘guilty’ population (1907) thanks to their non-participation in the revolutionary movement of 1905-1907, tsarism gave the Abkhazians themselves the opportunity to withstand the ethno-cultural offensive from the side of Georgia. If previously the Abkhazians saw in the face of the Georgians sympathisers and to a certain level protectors, then, by the start of the century, the striving for, and the concrete steps taken to effect, the georgianisation of the Abkhazians shattered the trust the Abkhazians had in the Georgians. Henceforth, Abkhazian society, in order to find safety from the impending new ethnic catastrophe of assimilation, began to show concern for the mass-expansion of Abkhazian literacy, for the conservation and development of Abkhazian culture, and the restoration of Abkhazia’s statehood.

Tsarism’s attempts to support the national rebirth of the Abkhazians were, in the main, directed not by any yearning to preserve the ethnic identity of the Abkhazians but by a desire to provide some kind of barrier to the process of the georgianisation of the core population of Abkhazia and to restore trust between the Abkhazian and Russian authorities. At the same time, these measures took on a half-hearted character, and in many settlements in Abkhazia, especially its south-eastern region of Samurzaq’an, the Abkhaz language continued to be under pressure from the Mingrelian language (and, for official or religious purposes, Georgian). Moreover, despite all efforts, the Abkhazian population of this region, forming about half of the ethnic Abkhazians left after the Maxadzhirstvo (’Exile’), was subjected to intensive assimilatory activity under the leadership of the Georgian intelligentsia and Church, and later by both the Menshevik and Bolshevik Georgian authorities.

Following upon the forced suppression of the Abkhazian national self-awareness among the majority of the Samurzaq’anians, the authorities of Soviet Georgia in the 30s-50s of the XXth century, with the support of Moscow, began to effect a policy of georgianising the entire Abkhazian ethnos. To this effect, the following fundamental measures were put into practice:

With the ending of Stalin’s regime, the Abkhazians succeeded in avoiding total assimilation. However, even in the post-Stalin period there continued both the settling of Georgians in Abkhazia and attacks in different forms on the national culture of the core ethnos.

In sum, under the conditions of the former Soviet Union, the Abkhazians, in addition to the ending of Stalin’s regime and the unmasking and condemnation at USSR level of the assimilatory policy of Georgia towards the Abkhazian people, were helped with regard to preserving their national identity and Abkhazian self-awareness by the following factors:

— the struggle of the people to resurrect Abkhazia’s state-sovereignty, to preserve and develop the national identity of the Abkhazians, who made their feelings known in actions quite unprecedented for the Soviet regime: letters and appeals, protests, mass-meetings, demonstrations in 1931, 1947, 1952, 1957, 1965, 1967, 1977-79, 1989;
— the restoration of the Abkhazian alphabet on the basis of Cyrillic;
— the change in school-policy — the revival of Abkhazian primary schools, incomplete and complete secondary Abkhaz-Russian schools, and special educational institutions;
— the restoration of periodical publishing, radio-broadcasting, book-publishing, professional and people’s artistic collectives in the Abkhaz language;
— the development of Abkhazian literature and professional art;
— the development of abkhazological scholarship in: history, archaeology, ethnography, folklore, literary studies, linguistics, and other fields;
— the outflow of part of the transplanted Georgian population from Abkhazian villages, and the preservation overall of the compactness and monoethnicity of Abkhazian settlements in two regions of Abkhazia: Abzhywa and Bzyp;
— the functionality of monoethnic families;
— the vitality of national customs and traditions, and, overall, the maintenance of the norms of the traditional way of life = Apswara;
— the intensive contacts between the mountain- and the village-residents of the core people of Abkhazia, etc...

With the disintegration of the USSR, the Georgian-Abkhazian stand-off took on a transparent character, transforming into war. The war between Georgia and Abkhazia (1992-1993), unleashed by the government of Georgia, became a new stage of humanitarian catastrophe for the Abkhazians as well as for the other peoples of multi-ethnic Abkhazia. The Georgian military-political authorities, acting in accordance with their guiding principle of ‘Abkhazia without Abkhazians’, implemented a policy aimed at the complete extermination of the Abkhazian ethnos. The policy of genocide and of the ethnic cleansing of the Abkhazians on the territory of Abkhazia under the control of the occupying forces was sanctioned by the official authorities of Georgia.

The Georgian occupying forces committed vandalism even against Abkhazian national culture in order to deprive the people of their historical memory. On the occupied territory of Abkhazia were deliberately destroyed tens of educational, scholarly and cultural institutions, including the Central State Archive of Abkhazia and the Abkhazian Institute of Language, Literature and History Named after D. I. Gulia.

In  this extreme situation the Abkhazian nation, despite pressure over many years from different powers, demonstrated the moral-psychological and ideological-political readiness to take upon itself the historical responsibility for the fate of its Homeland with the collaborative assistance of volunteers from the fraternal republics of the North Caucasus, South Russia, the Abkhazo-Adyghean diaspora, and to defend itself and the representatives of the other peoples residing in Abkhazia from future catastrophe. The real threat of the annihilation of the Abkhazian ethnos was prevented. The decolonisation of Abkhazia has provided the conditions for the leading to its logical conclusion of the self-determination of the Abkhazian race.

The victory of the people of Abkhazia in the Patriotic War of 1992-1993 and the liberation of the country from colonial dependence on Georgia, despite the postwar severe, at times critical, military-political, economic, demographic, moral-psychological, and informational problems, have created the basis for the construction of an independent state based on the rule of law.

Analysis of the trodden path proves that the state independence of Abkhazia and its international recognition alone can guarantee the rebirth and flourishing of the Abkhazian race and of the multi-ethnic population of the Republic of Abkhazia. The recognition of the independence of the Republic of Abkhazia by the Russian Federation on 26 August 2008 is the first step along this road. A qualitatively new epoch in Abkhaz-Russian relations has begun.