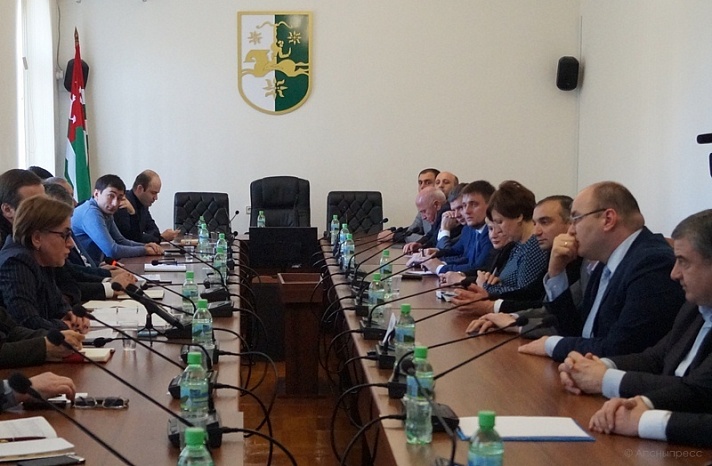 There was held a meeting of parliamentarians with representatives of the banking community of the country on the Day of the Employee of the Banking System of Abkhazia in the National Assembly of Parliament.

SUKHUM -- There was held a meeting of parliamentarians with representatives of the banking community that took place in the National Assembly of Parliament of the Republic of Abkhazia. The meeting was also attended by Beslan Tarkil, head of the Office for Supervision over Enforcement of Legislation of the Prosecutor General's Office of the Republic of Abkhazia and Chief Bailiff, Deputy Minister of Justice Zurab Bartsits.

Opening the meeting, the Chair of the Committee on Budget, Credit Organizations, Taxes and Finance Natalie Smyr noted that there is a meeting with representatives of the banking community of the country for the first time on the platform of the Parliament. "And the date of it was chosen quite symbolically. I am very close to the banking community, as in the past I was your colleague. The day to talk about the prospects for development, problems of the banking system and possibilities for overcoming them has come. This meeting gives us the opportunity to interact, it will be held in the framework of a dialogue. We clearly understand that the banking system is the engine of the economy and the possibility of its development, as well as the possibility of developing small and medium-sized businesses by obtaining cheap and long-term loans. The role of banks in the development of the state plays an important role. Similar meetings will be held at least once a quarter, " - Smyr stressed.