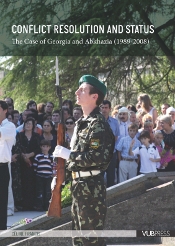 The book is published on AbkhazWorld.com with permission of Celine Francis.

The dispute between Georgia and Abkhazia is not a conflict of equals. In international conflicts, adversaries may differ de facto on the ground, in terms of population, territory and capability, among other things. As internationally recognized states, however, they have equal de jure status, and fears that inviting the other side to the negotiating tablemight be construed as recognition, for example, rarely intrude. The question of status does pose problems, however, when a conflict is being fought between a recognized state and an unrecognized entity, and these problems may contribute to increase the intractability of such conflicts.

Conflict Resolution and Status. The Case of Georgia and Abkhazia explores how and to what extent the difference in status between a sovereign state and an unrecognized entity hinders conflict resolution activities. Based on intensive fieldwork and unedited negotiation material, the book provides an in-depth analysis of the negotiations, informal dialogues and grassroots activities that took place in Abkhazia and Georgia between 1989 and 2008.

Céline Francis analyses the parties’ use of strategy to impose their own definition of Abkhazia’s status. She demonstrates how their strategies impeded progress in areas as diverse as the return of displaced people, the deployment of a UN peacekeeping operation in the early 1990s and the implementation of confidence-building measures. Her study also shows both the potential of a multi-track approach to resolving this conflict and its limits, and it illustrates the consequences of lack of engagement with an unrecognized entity.

Céline Francis has a Master’s Degree in Human Rights from the Facultés Universitaires Saint- Louis and an MA in International Relations from the Université Catholique de Louvain. She obtained a PhD in Political Science from the Vrije Universiteit Brussel in 2010. Her research interests include conflict resolution and human rights.

The full book in PDF can be downloaded by clicking here (4.24 MB)