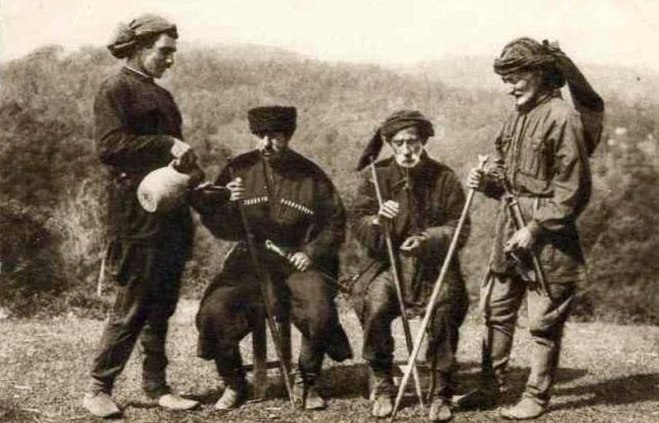 Aleksandr Orlov-Kretchmer ‘Abkhazia of the 19th Century and Early 20th Century in Works of Art and Photographs [in Russian]. 3 volumes. Moscow: Vikmo-M. 2014.

In 2008, P’aat’a Kurdovanidze published in Tbilisi (Georgia) a luxurious 247-page Georgian-Abkhazian Album, printed on high-quality paper and bound in card (compiled and edited by Khatuna Ch’urghulia). The handsome volume reproduces many old photographs, selected to emphasise the positive nature of Georgian-Abkhazian relations. The photos are accompanied by a bilingual text in Abkhaz and Georgian. Two pages each are devoted to Russian- and English-language summaries.

This was followed in 2011 by another Tbilisi publication, being a 250-page, larger-format, hard-back collection of 271 old photos, each accompanied by an explanatory bilingual caption in Georgian and Abkhaz. The compiler was Teo Gitsba and the chief editor Nino Berdznishvili.

These two Georgian publications, which, for the very reason that they originate in Georgia, are not freely available in Abkhazia, have now been trumped by a de-luxe set of three large volumes put together with a specially composed accompanying  Russian text by Aleksandr Orlov-Kretchmer. Each sumptuous volume ends in the same 3-page summary in English. The author has brought together some 2,700 rare illustrations (of maps, drawings, paintings, postcards, photographs) plus citations from a wide variety of sources; the text is interspersed with verses, all in Russian (be they original or translated).

Volume one (432pp.), subtitled Painting, Graphics, reproduces works left by visitors to Abkhazia. Images of those who produced the illustrated items are presented, a potted biography and description of their writings appended, and their work is set in the context of contemporary historical developments. Volume two (572pp.), subtitled Rare Photographs, starts with the first actual photographs of Abkhazia, whilst among the last we see a selection of shots of Trotsky (p.544), taken in Abkhazia in 1924, where he was resting for health-reasons, his absence there from Moscow at the time of Lenin’s death presenting Stalin with a golden opportunity he did not let slip to worm his way into pre-eminence for the Bolshevik succession! Amongst the illustrations of maps, individuals, nature, architecture, clothing, ecclesiastical ruins and church-ornaments, a particularly significant find (at least as far as this commentator is concerned) is located on p.471. This is the reproduction of a 1932 Itinerary Map for visitors to the Transcaucasian Federation. It clearly demarcates the Georgian SSR, the Armenian SSR, the SSR of Azerbaijan AND the SOVIET SOCIALIST REPUBLIC of Abkhazia. This is important, because Stalin, having now firmly secured for himself top position in the Kremlin’s hierarchy, had by this date downgraded the status of Abkhazia from that of a full Soviet Socialist Republic (in treaty-association with its neighbour Georgia) to that of an AUTONOMOUS Soviet Socialist Republic within Georgia. Many on the Georgian side of the argument claim that the full republican status claimed by Abkhazia for most of the 1920s had never really been officially recognised, but it was a fact obviously well-known to the state-cartographers, even if by the time of publication the map was out of date. Volume three (440pp.) is subtitled Illustrated Postcards and takes the reader from west to east along the coast, depicting Gagra, Bzyp Abkhazia, New Athos, (the capital) Sukhum and its Surroundings, the Kelasur Wall, the K’odor plus Samurzaq’an, and Moutainous Abkhazia, ending with the People of Abkhazia.

Specialists in this or that discipline (history, ethnography, art, etc..) may have comments to make on this or that aspect of the author’s text, but the main value of this mighty set resides in its extraordinarily rich collection of illustrations. The undertaking must have been a labour of love on Orlov-Kretchmer’s part, and it is to be hoped that the resulting three volumes, visually chronicling Abkhazia’s now largely lost past, might contribute to a wider appreciation of the essence of Abkhazia/the Abkhazians and will be warmly received by their readers.