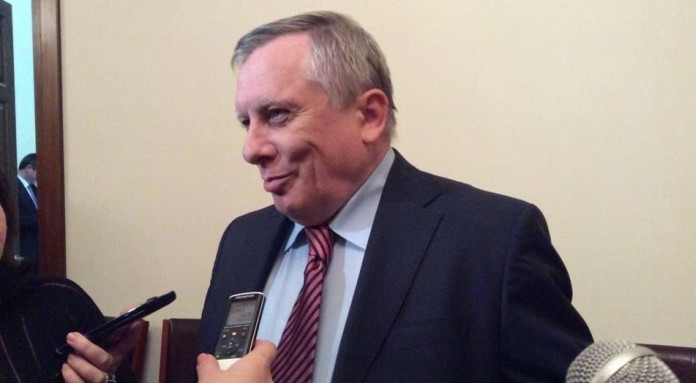 RFE/RL(Caucasus Report) -- Raul Khadjimba, the de facto president of Georgia’s breakaway Republic of Abkhazia, hasappointed parliament deputy Artur Mikvabia as prime minister in place of Beslan Butba, who resigned that post on March 17 after less than six months in office.

Butba explained that he stepped down because "as prime minister I have recently been cut off from most issues. What is in effect a second cabinet has been created within the presidential apparatus."

Just days earlier, Khadjimba had criticized the cabinet’s performance as ineffective and raised the possibility of merging it with the presidential apparatus.

Journalist Anton Krivenyuk, for his part, pointed out that Butba had minimal room for maneuver in a system where the president, rather than the premier, selects government ministers.

Mikvabia, made clear, however, in an interview with the state news agency shortly after his appointment on March 21 that the planned merger will not entail simply subordinating himself and cabinet members to the president, even though under the Republic of Abkhazia constitution the president is head of the executive branch.

Rather, Mikvabia said, it is intended to avoid duplication by abolishing those structures within the presidential administration, such as the Directorate for Economic Issues, that duplicate the work of specific ministries. He added that while the state will retain responsibility for macroeconomic issues, "in a market economy it should not become directly involved in the activity of business structures."

Mikvabia, 65, is a decade older than his predecessor, but his background is similar to Butba’s and their diagnosis of the problems besetting the region's moribund economy and how to overcome them largely coincide.

Both Butba and Mikvabia left Abkhazia for Moscow in the early 1990s and went into business; neither was an active participant in the 1992-1993 war that culminated in Abkhazia’s de facto independence from Georgia, although Mikvabia provided funding for the war effort, while Butba organized humanitarian relief.

Both subsequently returned to Abkhazia to become the leader of a political party: Mikvabia was the first chairman of the public organization "One Abkhazia" in 2004, while Butba founded the Party of Economic Development of Abkhazia in September 2007.

Both backed Khadjimba’s candidacy in the August 2014 pre-term presidential ballot necessitated by the ouster of Aleksandr Ankvab; Mikvabia, who was elected to parliament in March 2012, served as Khadjimba's campaign manager. Butba and Mikvabia have both criticized Ankvab’s economic policy, rejecting as flawed and counter-productive the priority he attached to developing Abkhazia’s agricultural sector, specifically by encouraging the creation of large agro-industrial holdings.

As economic advisor to then President Sergei Bagapsh, in 2005 Mikvabia drafted a program for socioeconomic development that was loosely based on the experience of those southeast Asian states that had developed an export-oriented industrial sector on the proceeds of exporting raw materials.

In Abkhazia’s case, Mikvabia suggested that the export of timber and construction materials such as marble, granite, limestone, gravel and sand, and of agricultural produce to Russia, could fund industrial development.

That program was not systematically implemented, however, even after the Russian Federation formally recognized Abkhazia as an independent sovereign state in August 2008 and began providing large-scale economic aid. (One of the opposition’s criticisms of Ankvab was that Russian aid was channelled into unnecessary infrastructure projects such as the construction of a swimming pool in the former coal-mining town of Tkuarchal, where inhabitants are too poor to pay the admission fee.)

In November 2014, shortly after Khadjimba’s inauguration, Mikvabia, then still a rank-and-file law-maker, unveiled a new socioeconomic development strategy for the next 10-15 years that borrowed from his program of nine years earlier. That strategy envisages transforming Abkhazia into a tourist, cultural and medical center for the entire Black Sea region, with tourism serving as the locomotive for economic development. Mikvabia subsequently argued that just catering to the Russian tourist market “could solve all our problems”  and bemoaned the fact that the tourism sector was neglected under Ankvab.

Moscow may not look favourably, however, on plans to promote Abkhazia as a tourist destination in competition with Crimea and Sochi, where it is hoped to recoup at least a fraction of the billions of rubles invested in infrastructure in the runup to the February 2014 Winter Olympics.

Furthermore, Mikvabia’s skills as a strategic thinker do not necessarily qualify him for the day-to-day compromises that the post of prime minister demands, especially given that the economy is only one of several problems he will be expected to solve. Khadjimba admitted last year that unemployment is close to 70 percent.