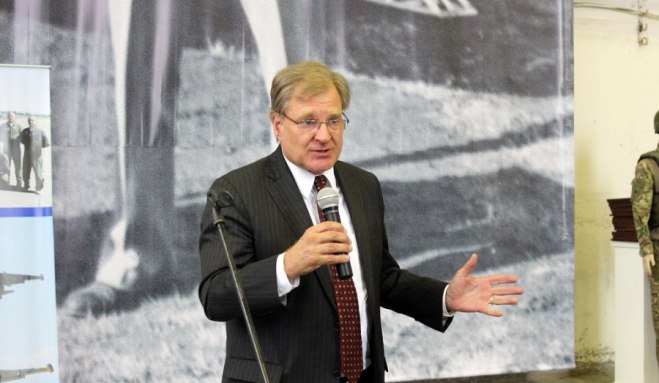 U.S. Ambassador to Georgia Richard Norland said “Georgians were treating Abkhazians and Ossetians the same way as Russians were treating Georgians and Georgia will have to apologize for the mistakes of the past”. - See more at: http://frontnews.ge/en/news/15755

Readers of AW will be well aware that a number of well-informed commentators have been arguing for almost a quarter of a century that Georgians should recognise that their treatment of the Abkhazians and South Ossetians, not only during the Soviet period but also beforehand, was a small scale mirror of the way that Russia often behaved towards them and should have adapted their behaviour accordingly if they wished to take these minorities with them into post-Soviet independence. Instead they did the precise opposite by antagonising them with a renewal of rampant chauvinism. Perhaps the light is finally beginning to dawn amongst diplomatic and (one would hope) political circles, and one looks forward to increasing realism towards Abkhazia from Western policy-makers in the near future. In this context, AW offers the following two comments.

Norland's belated comment is in part useful. However, the killing of 19 Tbilisi independence demonstrators by Soviet special forces in 1989 cannot be laid at the door of the South Ossetian people who were invaded and massively killed in 1991 and again in 2008 by the independent Georgian government. I underline "Soviet" so as not to confuse Gorbachev's Soviet state with the subsequent Russian one). Similarly, the independent Georgian government's invasion, mass murder and destruction of Abkhazia in 1992-93 can in no way be justified nor placed on the same footing as Russia's policies and actions regarding Georgia. One must remember that Norland represented the US government which armed and trained the Georgian aggressors against Abkhazia and S Ossetia*. It is ludicrous to compare the Soviet violent police action in Tbilisi in 1989 with any of the later military adventures by the various Tbilisi authorities against S Ossetia and Abkhazia. - AW Admin

*Photos: US military instructors giving lessons to Georgian troops in how to construct improvised bombs. http://abkhazworld.com/articles/analysis/406-absence-of-will-commentary.html (End of commentary)

CHRISTOPHER LANGTON, INTERNATIONAL STRATEGIC STUDIES INSTITUTE: When the Abkhaz get there, and the Russians, and they see Western-supplied weapons because the Georgian army has been modernised by NATO countries, they say, “You didn’t notice them?" Well, they notice the fact there were weapons, but they simply didn't say what sort of weapons.

Colonel Christopher Langton has served as both deputy head of the UN's mission in Abkhazia and as Britain's defence attache in Georgia and is now a leading military analyst. He says the UN had noted the arms stockpile in the Kodori and reprimanded the Georgian Government but that observers didn't bother trying to identify the weapons' origins.

REPORTER: So really the what sort of weapons is not especially relevant?

CHRISTOPHER LANGTON: Well, only if you're pointing your finger at the West, and its assistance to Georgia and the fact that Georgia abused that friendship by using weapons and equipment given to them for illegal purposes.

SERGEY BAGAPSH (Translation): The truth is Saakashvili would never have attacked either Abkhazia or South Ossetia without the go-ahead from Washington. That’s 100 per cent. They went in with US consent that is for sure, I know it and we have lots of evidence to prove it. We have photos of the Upper Kodor Gorge where Americans taught Georgian troops demolition techniques. I have photos they took and abandoned there.

To me Ambassador Norland's statement is remarkable.

2. that the insistence by the US and European nations on her territorial integrity ignored Stalin's history of favouring Georgia and incorporating Abkhazia and South Ossetia within her borders,

3. that Georgia's unrealistic claims on Abkhazia and South Ossetia merely served to render her open to Russian manipulations, that is, they these claims weakened georgia rather than strengthened her,

and as a corollary to this,

4. that strife in the Caucasus would enhance the political profile and power of Russia's security apparatus (especially her army) and threaten her democratic development under Yeltsin.

This last fear was fully realized with the subsequent Chechen wars, where I also played the role as an advisor and back channel diplomat.

When I was actively engaged I did not urge Tbilisi to apologize,(I thought there would be little point in her doing so back then), but I did urge the US to force Shevardnadze to withdraw his forces and seek some form of recognition for Abkhazia, rather than merely to urge him on in the footsteps of Gamsakhurdia.
By the second year of my time (I advised for 8 years with Clinton, 1 with W), South Ossetia had already seceded and was no longer fighting with Gg.

Did I have anything to do with this change on the part of the US? Not directly, but perhaps some one at State read one of my e-mails (I have continued over the years to make these points with some of my friends, none of whom were officials, but some of whom had connections with Washington), or perhaps some one at State or the White House dug up one of my old policy memos in an effort to figure out what to do with Georgia now that Saakashvili has been shoved to the margins.

Clearly the conventional Georgia policy of the US has runs its course and ended in failure.

So, I am astonished, but glad that at least 20 years later some sense has crept into Washington's approach to Tbilisi. Maybe this is the start of some lasting peace accords in the South Caucasus. Of course, Russia will have to be persuaded that peace in this region is in her interests as well. It is, but I am not confident that everyone in the Russian power structure will see things this way.

Abkhazia Twenty Years On, Some Thoughts by John Colarusso

Why Can Georgian President Mikheil Saakashvili Not Emulate Willi Brandt? by Liz Fuller

Why I Apologize To Abkhaz People: Choice for Georgia: Georgian Chauvinism or Abkhazia? By Ucha Nanuashvili

From the "Absence of Will" documentary film: http://abkhazworld.com/aw/conflict/692-absence-of-will-commentary

[11.52 sec.] Gia Karkarashvili [General - Army Commander of the State Council of Georgia]: In the first place, the Ossetian war [1991-92] in Tskhinvali had just ended. The Georgia National Guard suffered heavy losses. We were exhausted. That’s why I thought it was reckless to go into Abkhazia. But I was told that the 13th-14th August was a good time to launch a military operation because the Russian Parliament was in recess. Unfortunately, we entered Abkhazia in a very disorganized way. We didn’t even have a specific goal [REMEMBER the claims about protect the railway] and we started looting villages along the way. As a result, in the space of a month we managed to make enemies of the entire local population, especially the Armenians.

[4:34 sec.] Reporter: Mr. Shevardnadze, could you we have prevented the war in Abkhazia?

Eduard Shevardnadze: Of course we could. However, we need to remember the times we were living in back then and what was going on in Georgia at the time. But [Tengiz] Kitovani, the defence minister, should never have sent troops to Sukhumi. That was our biggest mistake.

Excerpt from UNPO’s Abkhazia Report: ‘...When Georgian troops under general command of Defense Minister General Tengiz Kitovani first entered Sukhumi on August 14, Georgian soldiers attacked non-Georgian civilians, beat them, killed many, robbed them, and looted their houses and apartments. Reports of attacks on Abkhazian, Armenian, Russian, and other non-Georgian minority civilians, including killing, torture, and burning, looting or smashing of houses or other belongings, originate from many regions of Abkhazia under Georgian military control and for the entire period since August 14.’ [UNPO: November 1992 Mission to Abkhazia, November 1992, b. Human Rights and Cultural Destruction] http://www.unpo.org/downloads/AbkGeo1992Report.pdf