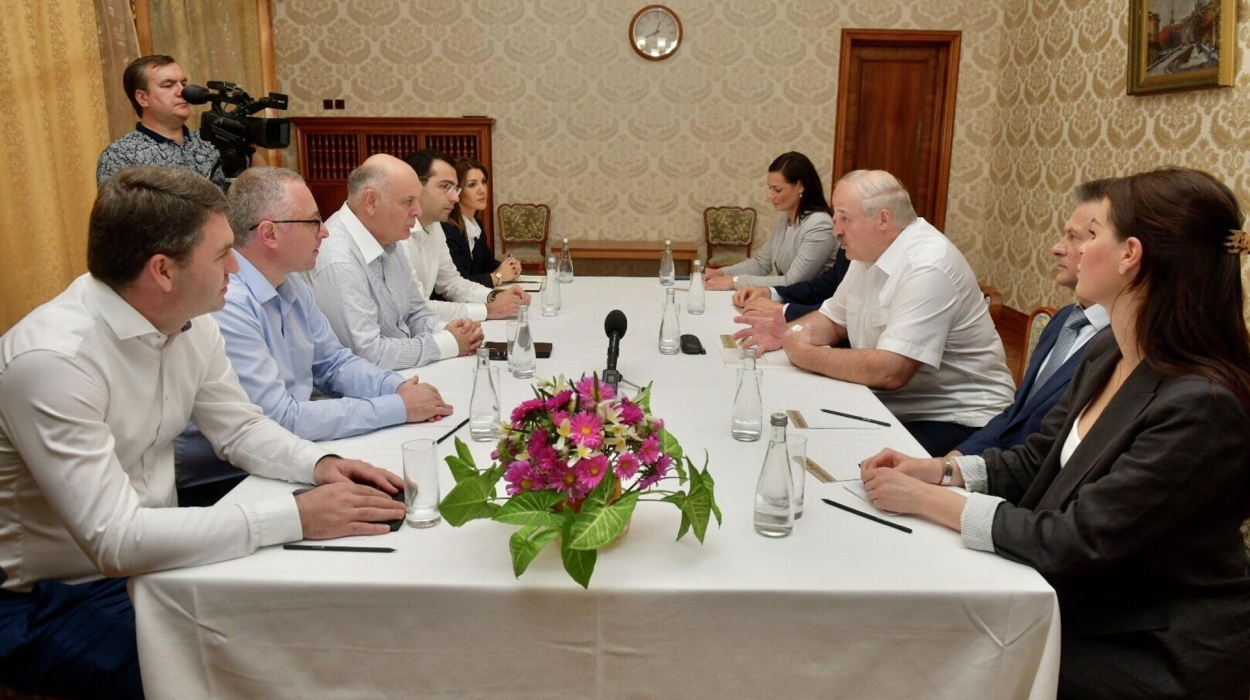 Alexander Lukashenko at a meeting with Aslan Bzhaniya in Pitsunda.

Ekho Kavkaza [September 29, 2022] -- Yesterday's ‘lightning-', according to one media-outlet, visit of Alexander Lukashenko to Abkhazia, to the Pitsunda state-dacha, could not but cause a lot of responses among the Abkhazian Internet-community and analytical publications in both local and foreign media.

As is well-known, 68-year-old Lukashenko has ruled Belarus in an unchanging and authoritarian manner for 28 years, that is, almost half of his life. He became president for the first time when he was not yet forty years of age, but very soon the nickname Batka stuck to him in the post-Soviet space. The quarter-century history of his relations with Abkhazia can be called a real saga, during which there have been very different, sometimes diametrically opposed periods.

Many in the partially recognized republic, as Abkhazian President Aslan Bzhania recalled during the Pitsunda meeting yesterday, recall with gratitude how in January 1996, at the Council of CIS Heads of State, it was Lukashenko who spoke out against the economic blockade of post-war Abkhazia suggested by Tbilisi. (In addition to him, the blockade was also not supported then by the leadership of Turkmenistan). Bearing this in mind, and most importantly, taking into account the fact that Belarus was part of a Union State with Russia, in Abkhazian society after the historic recognition of the independence of Abkhazia by Moscow on 26 August 2008, the overwhelming majority predicted that it was the Republic of Belarus that should, apparently, be the first to follow the example of the Russian Federation. But then the matter was limited only to a ‘study’-trip to Sukhum by representatives of the Belarussian parliament. Over the following years, the opinion in Abkhazian society about Lukashenko swung sharply in a negative direction, reaching even caricatures of him in local newspapers for his ‘commercial position’ on the issue of recognition of the Republic of Abkhazia and South Ossetia. However, in the Russian media, he has been sharply criticised more than once and on various issues.

The critical moment for the Lukashenko regime came in 2020, when, after the position he took almost as a COVID-dissident and a number of statements by Batka that caused indignation in the Belarussian society, he was accused of falsifying the results of the presidential elections, and in August, huge masses of peaceful protesters took to the streets of Minsk and other cities. In Abkhazia, as in Russia, opinions about those events were divided. Some even wrote on social networks that they would not want recognition of the independence of the Republic, if it followed from the ‘last dictator of Europe’, who so harshly suppressed dissent in his country.

But, as they say, everything flows, everything changes. And over the past two years, a lot of water has flowed under the bridge ... And in one of the groups of Abkhazian Internet-commentators numbering more than a hundred, the vast majority of statements yesterday and today were enthusiastic and grateful:

“I think that by Victory Day on 30 September, Lukashenko will recognise us and this will be a great gift for us.”

But the other group was dominated by skepticism:

“His fierce defence of the idea of Georgia’s territorial integrity just a few years ago during a visit to Tbilisi is fresh in my memory.”

As for analytics, here are a few fragments from a publication in one of the Telegram-channels:

“The only sensation was that Lukashenko was aware of the plans of the head of the Foreign Ministry of Abkhazia, Inal Ardzinba, to marry. This news shocked even the most well-informed Sukhum insiders, who knew nothing about it. And then, albeit without jokes, behind the closed doors of the Pitsunda meeting-room, a most complicated chess-game was played out. And we can distinguish at least three levels of these negotiations. The first level is the issue of recognition of Abkhazia by Minsk. Experts on the issue say that bargaining on this issue between Moscow and Sukhum, on the one hand, and Minsk, on the other, has been going on since 28 August 2008.

The second level is the possibility of Abkhazia joining the “Union State”. The head of Abkhazia Aslan Bzhania and Foreign Minister Inal Ardzinba have recently started talking about this. However, back in 2020, the then-Deputy of Parliament Valeri Agrba and former Vice-President Valeri Arshba were talking about this ... Suddenly, there is a common interest between Minsk and Sukhum. The Belarussian élites have long been afraid that the “Union State” might become a form of 'gubernisation' [sc. turning it into a province subject to an appointed governor – Trans.] of Belarus, together or in parts ... And the preservation of the “Union State” as a form of supra-national association might become a common interest between Minsk and Sukhum. And Minsk gains an ally. The third level is economic. At the end of June 2022, Lukashenko's closest associate Viktor Shejman visited Sukhum and met with Aslan Bzhania and Inal Ardzinba. According to rumours, Belarussian investments in the Abkhazian economy were discussed behind closed doors. Including the construction of some tourist-facilities and investment in the transport-logistics sector. Thus, today's visit of Lukashenko is an equation with many unknowns. And the solution of this equation will depend on the current situation.”

But the author of the article in the Abkhazian paper Chegemskaja Pravda believes that joining the “Union State” of Abkhazia might, on the contrary, not be in Batka’s hands. And he explains it like this:

“However, in the new configuration, not everything is so simple. The recognition of Abkhazia for Minsk becomes something more than the establishment of diplomatic relations with Sukhum and the automatic severance of such relations with Tbilisi. If such an act happens, then it will certainly put under serious revision the format of the “Union State of the Russian Federation and the Republic of Belarus” that has developed over the past quarter century. The emergence of a third player in this Union (and both Russian and Abkhaz politicians have been talking about this lately), even in the shape of tiny Abkhazia, could become a threat to the existing balance between Moscow and Minsk. Aleksandr Lukashenko apparently believes (and not without reason) that, upon the appearance of a third participant (or more) in the “Union State”, the decision-making centre will be focused exclusively in the Kremlin. And he is not ready to take such a step. But openly to establish economic ties with Abkhazia - Batka is ready for this. Previously, such a game was not worth the candle, but now, when there is nothing but sanctions around, one can extract a small, but beneficial, result from this action."

The same article contains the following reasoning: “The period of ‘multi-vector’ for Minsk ended in 2020 with the election of Lukashenko for the next presidential term. The West, considering the victory of Batka illegitimate, put him on its ‘black list’. And then came 24 February 2022. Minsk unconditionally supported Russia's actions towards the Ukraine. And this was already a statement of the fact that Alexander Lukashenko has no illusions even in the long term about improving his relations with the West. Now that a ‘new reality’ has taken shape, there seems to be no reason for Minsk to delay the recognition of the independence of Abkhazia and South Ossetia."

And how did the Belarussian opposition react to Lukashenko's Pitsunda trip? The following text caught my eye on the Facebook feed (translated from Belarussian):

“Lukashenko is in Abkhazia... And what does the head of state do there if such a trip was not planned and announced?! I'm translating – worsening relations with Georgia, another blow to ‘Belavia’ [Belorussian Air], a break in economic relations... What could be the motives for traveling to unrecognised territories?! Another loss of 2 billion in revenue?! In other words, a person does one thing as well as the other.”

Official Tbilisi will, if Minsk recognises Abkhazia, ‘automatically’ break off diplomatic relations with it, as happened with Russia. But already yesterday, the Georgian authorities summoned the Belarussian ambassador ‘for a carpetting’ and accused Lukashenko of violating the Georgian law ‘On the occupied territories’, of bilateral relations and of the principles of international law. And at a rally of one of the opposition parties, his portrait was burned along with a portrait of Vladimir Putin.

Today, the press-service of the Ministry of Foreign Affairs of Abkhazia issued a statement by Foreign Minister Inal Ardzinba in response to all this: “The Republic of Abkhazia is an independent state, a subject of international law and a geopolitical reality. We regard Belarus as an important direction in our foreign policy. These are our friends. The reaction of third countries to this visit, for example, Georgia, does not disturb us.”

Taking into account many years of previous experience of relations with the very unpredictable Belarussian leader, many in Abkhazia still continue to wonder, as in the well-known children's counting rhyme with chamomile petals: "She loves me, she loves me not; she will press me to her heart, she will send me to hell...". Echo of the Caucasus contacted today the Abkhazian politician, former Minister of Foreign Affairs and Speaker of the Parliament, and now a member of the Public Chamber of Abkhazia Sokrat Dzhindzholia, and we asked him if he believes that in today's geopolitical conditions, Lukashenko will still accept the recognition of the R[epublic of] A[bkhazia]. Here's what he said:

“Yes, I believe he will. He has spoken on this issue more than once. He has expressed different opinions. But recently he said that he would take this step if the President of Russia told him to. And yesterday he said that they had been sitting and talking all day long. The visit is certainly important. And I think recognition will follow."

- Well, if we talk about the entry of Abkhazia into the “Union State” ... Would you welcome such a step?

- Yes, this is the next step, and very important for Abkhazia. You see in what world we are living. Alone we will not survive. We must be in alliance with strong allies."

It was no coincidence that I asked Sokrat Rachevich the last question, because there is an alternative point of view in Abkhazia. So, yesterday at a meeting at the Centre World without Violence named after Zurab Achba, representatives of political parties and social movements discussed the socio-political situation in and around Abkhazia, and one of the speakers, a member of the Supreme Council of the veterans’ public organisation Arwaa Akhra Bzhania, said that the potential entry of Abkhazia into the “Union State of Russia and Belarus” does not meet her interests: “Status cannot be exchanged. This is very dangerous populism.” But, as is  well-known, not all representatives of the political opposition think so.

This article was published by Ekho Kavkaza on September 29, 2022, and is translated from Russian.