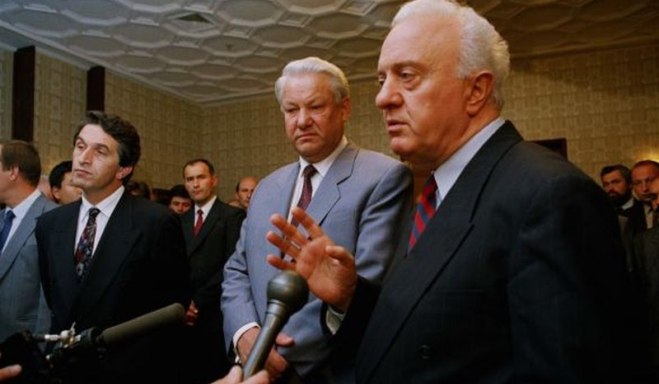 “Who would have thought I would love Shevardnadze.” I heard from Tbilisi’s intellectuals this summer, as they recovered from the winter putsch and economic crash. Bulldozers were clearing the rubble, trolley buses not destroyed on the barricades were running on bright new copper cables, and citizens with cash could buy Russian champagne, Turkish chocolates and canisters of Azeri petrol. The figure of ex-president Zviad Gamsakhurdia had shrunk to a Grand Guignol puppet. His supporters, testosterone-fuelled Bacchantes who had been stabbing suspected “red intellectuals” in the genitals with scissors, melted back to matriarchy. You might forgive Eduard Shevardnadze his murderous past in the communist police and party, and conclude that the return of the master fixer had brought stability.

A car-bomb as I landed in Tbilisi and, ten days later, several hundred Gamsakhurdia supporters storming Tbilisi’s TV station proved, however, that Shevardnadze was a Frankenstein overpowered by his monster.

"Saakashvili slammed Ivanishvili on April 23 for saying, in remarks to the Council of Europe’s Parliamentary Assembly, that Georgia made “many mistakes” in its relations with the pro-Moscow separatist regions of Abkhazia and South Ossetia.

“Whose hearts is he trying to win?” Saakashvili asked. “This will have consequences for Georgia’s sovereignty, freedom, future, and territorial integrity.” (Georgia’s Changing Russia Policy by Brian Whitmore, RFE/RL, April 29, 2013)

- Mr. Shevardnadze, could you we have prevented the war in Abkhazia?

Eduard Shevardnadze: "Of course we could. However, we need to remember the times we were living in back then and what was going on in Georgia at the time. But [Tengiz] Kitovani, the defence minister, should never have sent troops to Sukhumi. That was our biggest mistake." (Documentary: Absence of Will by Mamuka Kuparadze -  See also: 'Absence of Will': A commentary, prepared by Metin Sönmez)

Gia Karkarashvili [Retired Major General - Army Commander of the State Council of Georgia]: "In the first place, the Ossetian war [1991-92] in Tskhinvali had just ended. The Georgia National Guard suffered heavy losses. We were exhausted. That’s why I thought it was reckless to go into Abkhazia. But I was told that the 13th-14th August was a good time to launch a military operation because the Russian Parliament was in recess. Unfortunately, we entered Abkhazia in a very disorganized way. We didn’t even have a specific goal and we started looting villages along the way. As a result, in the space of a month we managed to make enemies of the entire local population, especially the Armenians."

- Did they turn against us just because of the way our troops behaved?

Karkarashvili: "No, not just because of that. But we shouldn’t have allowed all that hatred to build up. We could have prevented it, but we didn’t."

"I feel really sorry for young Abkhaz and Ossetians. But as soon as I hear the call to arms, something inside me kicks in and I support it. It’s our split personality. Humanity, on one side, and our motherland, on the other." (Documentary: Absence of Will by Mamuka Kuparadze - See also: 'Absence of Will': A commentary, prepared by Metin Sönmez)

- So what went wrong between the Georgians and the Abkhaz?

Guram Odisharia: "I remember when I was still a boy, the Abkhaz would gather on Lenin Square in the centre of Sukhumi to discuss the demographic situation. They wanted to have their own Abkhaz language, television channel and their own university. The kind of things any nation, large or small, should have."

- What were ordinary people saying and how was it all being reported in the media?

Guram Odishaira: "We Georgians told the Abkhaz that they were a minority and they shouldn’t forget that they only made up 17% of the population. One famous Georgian poet wrote that you could actually fit all the Abkhaz into two football stadiums. It was outrageous!" (Documentary: Absence of Will by Mamuka Kuparadze - See also: 'Absence of Will': A commentary, prepared by Metin Sönmez)

Georgia said no to all of these things."

Paata Zakareishvili: "The negotiations went on all through December and the two sides made progess. I said it was a good month because at the same time an agreement was also reached for a meeting between Saakashvili and Bagapsh, the Abkhaz president. The Abkhaz were talking to the Georgian president’s special envoy Irakli Alasania. The Georgian side accepted the offer and even prepared a draft for the Abkhaz side to consider."

"Alasania managed to gain the trust of Abkhazia and he invited [Sergey] Shamba to Tbilisi. Shamba brought an important new document with him called ‘‘A Key To the Future’’. We didn’t agree with everything in it, but there were many things we welcomed, like contacts with Europe. And for the first time in the history of the conflict, there was no mention of Russia at all. Shamba took the unique step of leaving the UN Office and walking down Shardeni Street in central Tbilisi."

"Saakashvili should have at least come out and said that he welcomed such visits. But instead on that very same day he chose to go with the defence minister to visit the Senaki military base. A military base which was rebuilt to send a message to Abkhazia. It was a direct message from Saakashvili."

"In February this year Eduard Shevardnadze paid his first visit to the United Kingdom as Georgian head of state, which he became in 1992 after his democratically elected predecessor, Zviad Gamsakhurdia, was overthrown in a violent coup. While in London the Georgian leader spoke at Chatham House. The thrust of his talk was that the main cause of the New World Disorder was what he termed "aggressive separatism" in regions such as Abkhazia and Chechenia.

He lumped his predecessor, Gamsakhurdia, together with presidents Ardzinba of Abkhazia and Dudayev of Chechenia as "fascists", reiterated his unequivocal support for Yeltsin's savage intervention in Chechenia, and urged the international community to take "all necessary measures heedless of cost or criticism" to crush separatism wherever it raised its head. He is certainly doing his bit, allowing Russian bombers to fly from Georgian airfields with their murderous cargoes of cluster and needle bombs (the latter outlawed under the Geneva Convention) to be dropped on mainly civilian targets in Chechenia."  (Jaundiced view of a war that stayed‏, by Richard Clogg)

"Prior to 2008, Georgian officials said they would sign an agreement on the non-resumption of hostilities only as part of a broader agreement that would create security guarantees for Georgian displaced persons to return to Abkhazia. Today, they profess willingness to sign such an agreement with Russia, but not with the leaders of the entities to which they lay territorial claim.

Yet the formal agreement on the non-resumption of hostilities that the Abkhaz and South Ossetians are still campaigning to have adopted in the course of the ongoing Geneva talks is all the more crucial now in the wake of the August 2008 war -- a war that began with a Georgian artillery bombardment of residential areas of Tskhinvali just hours after President Saakashvili had announced a unilateral ceasefire.

The fourth factor is the Georgian propensity to moral absolutism. By this I mean the Georgian insistence on depicting the 1992-1993 war and its aftermath in black and white, with Georgia and the Georgian population of Abkhazia the victims whose actions were morally justified, and the Abkhaz (and Moscow as their supposed puppet master) as the demons.

One of the hallmarks of a great statesman is the capacity to demonstrate humility, admit that one's country has committed acts that are morally reprehensible, and beg public forgiveness for those acts. It was that capacity that impelled West German Chancellor Willi Brandt  to kneel spontaneously in Warsaw in December 1970 before the monument to the victims of the Warsaw ghetto uprising.

President Saakashvili chose not to travel to Sukhum immediately after his election as Georgian president in 2004 to denounce and formally apologize for the deliberate destruction by arson in 1992 of the Abkhaz national library. Had he belatedly made that trip this weekend, instead of flying to Colombia to attend the inauguration of President Juan Manuel Santos Calderon, it would have been a much-needed first step towards national reconciliation." (Why Can Georgian President Mikheil Saakashvili Not Emulate Willi Brandt? by Liz Fuller) 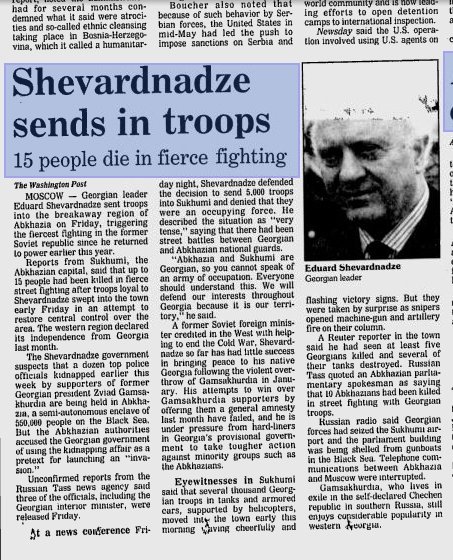