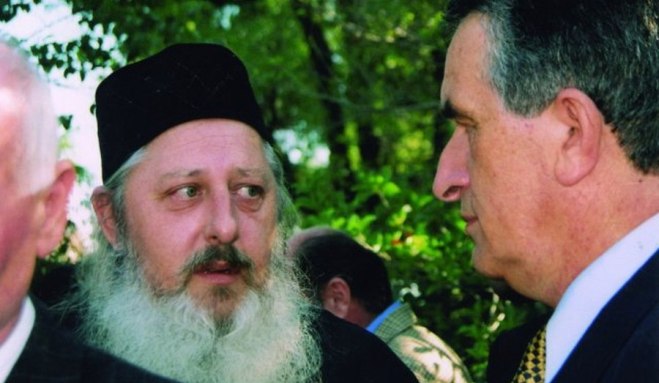 SUKHUM - The other day I had a conversation with famous Abkhaz actor and public and political figure Kesou Khagba, who has served at various times as a member of the Abkhaz parliament and Abkhaz Minister of Culture. The subject of our conversation was Eugen Krammig, the German journalist who died 18 months ago and who was a great friend of Abkhazia. Eugen was an extraordinary man. He was born in 1950 in Steinheim, near Essen, into a very wealthy family of one of the most famous jewelers in Germany. He was a serious sportsman and took part in the "Paris - Dakar" and "Paris - Moscow - Beijing" rallies. In the late seventies he took up journalism.

I met him myself in the mid-90s, but Kesou of course knew him much better. Here's what he had to say:

"In Moscow, he met with our friend Sergei Aramovich Arutyunov. At that time Krammig was helping Georgia. He thought the crazy wild-Abkhaz Muslims were killing Georgians. He traveled with a consignment of humanitarian aid to Georgia, and met with Eduard Shevardnadze. Shevardnadze gave him a silver dagger. But at the meeting in Moscow, Sergei Arutyunov began to try to explain to him that things were quite different. Kramig asked whether it was possible to travel to Abkhazia, so Arytyunov took him there. I was minister of culture, and met with Krammig. And he went and traveled all over Abkhazia with me and with a translator, and was surprised to discover the truth that the West did not know."

In 1996 alone, Krammig personally financed the transport to Abkhazia of several tons of medical supplies, four cars, clothes, baby food, about a thousand toys. And there is no need to say that at that time, when Abkhazia was being strangled by an economic blockade, that assistance to its people was valued extremely highly. Krammig met more than once with the first President of Abkhazia, Vladislav Ardzinba, and spoke of him with high regard: "What a great leader the small Abkhaz people have!"

Eugen brought German journalists with him to Abkhazia. Incidentally, I attended a very warm evening with the participation of Krammig and his friends at the Abkhaz National Library to mark the bicentennial of the great German poet, Heinrich Heine.

In Germany, he organized an exhibition of Abkhaz artists and the publication in his own and other newspapers of hundreds of articles about Abkhazia, the current situation there and the struggle of its people for freedom. Not everyone approved. There is quite a strong pro-Georgia lobby in the Federal Republic of Germany, and Krammig received threats and warnings, but that did not change his position.

Eugen and his German friends founded humanitarian fund "Help for Abkhazia." The Abkhaz leadership made available to house it a small building on the waterfront in Sukhum, near the shipyard. Krammig proceeded to repair it. The famous Abkhaz artist Timur Kaytan erected a memorial to Abkhaz-German friendship not far away. When Krammig came to Abkhazia, he used to stay in this building, at 16 Marine Street.

But, there is, unfortunately, a very unpleasant sequel to this story. In the mid-2000s, the building fell into the clutches of the housing mafia. Avid for gain, the criminals don't give a damn whose property they are encroaching on. And so someone forged a document designating the building in question as the non-existent 16a Marine Street and it was duly put up for sale. No one now lives there, and the building has lost its roof in recent years. The saddest thing is that regardless which government agency Eugen and his Abkhaz friends appealed to, no one was able to help. The building remained in the criminals' clutches.

Kesou Khagba says: "To be honest, it was the most shameful thing that has happened to me in my entire life. Two months before his death he wrote me a letter and asked me to approach vice-president Alexander Zolotinskovich Ankvab. Ankvab, Eugen said, is the only local official who can resolve such problems. A man came from Germany, his representative, and we went there. To my surprise, Ankvab knew the whole story. And he took on the problem and called every day for a week to report on it."

Justice, in the end prevailed. The building has been legally returned to the fund. But the founder, alas, is no longer alive. I am convinced that our state should perpetuate the memory of Eugen Krammig in Abkhazia. We need to think about the best way to do so, but society has no right to forget such people.

This article was published by Ekho Kavkaza on January 23rd, 2012 and is translated from Russian.

On his own initiative, Eugen W. Krammig produced a Music CD entitled “Freedom for Abkhazia”, all the profits from the sale of which will be sent to Abkhazia. The famous German musician and producer, Win Kowa, the famous choir Nartaa, made up of (near) centenarians, and the Chicago Philharmonic Orchestra were among the contributors to this album. This is the video prepared for one of the songs from the album "Freedom for Abkhazia (Stop the blockade)."

Tracks from the album:

Eugen Krammig was born in 1949 at Steinheim not far from Frankfurt on the Main. His life was quite interesting and full of numerous events. He was a truly talented versatile person: being a journalist, a sportsman he accompanied many famous people such as Jimmy Hendrix, Pink Floyd, etc. Krammig helped people who suffered from earthquake in Turkey, children from Chernobyl, Chechnya and other countries.

Once he visited Abkhazia Krammig fell in love with this country and its people for life.

Despite many difficulties and threats he always helped Abkhazia as he could. Eugen Krammig brought to Abkhazia batch of humanitarian products such as medical supplies, hospital equipment, building materials, etc.

From 1996 E. Krammig became Abkhazian citizen and Honorary Consul of Abkhazia in Germany. He felt for Abkhazia really extraordinary love and dreamed of its freedom and independence, he was happy for its success and always spread the information, wrote several books about Abkhazia. He gave back his Federal Cross of Merit as a protest of German Policy towards Abkhazia.

In 2007 President of Abkhazia Sergey Bagapsh awarded the Order "Ahdz Apsha" to Eugen Krammig for his constant contribution and support of Abkhazia.