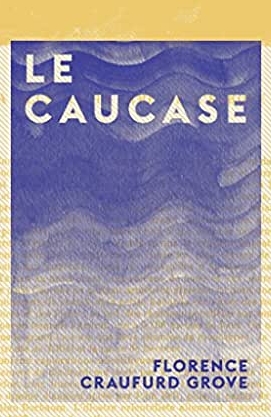 Florence Craufurd Grove (12 March 1838 – 17 August 1902) was an English mountaineer and author, sometimes known as F. Crauford Grove. He led the first expedition to ascend the higher summit of Mount Elbrus and was at one time president of the Alpine Club.

Grove became an experienced alpinist in the late 1850s and joined the Alpine Club of London soon after it was formed in 1857, later serving as its President from 1884 to 1886. He was one of the best British climbers of his day and is remembered for opposing guideless climbing during the 1870s.

An article on the founders of the Alpine Club in the Oxford Dictionary of National Biography calls him a "gentleman traveller of independent means".

Grove's book is illustrated with six plates by Edward Whymper, from photographs by Horace Walker, and a folding map. Chapters cover the Upper Rion, the valley of the Upper Terek river, the Bezingi glacier and the Kotchan Tau Group (both in Kabardino-Balkaria, Russia), Chegem and the Gorge of the Djilki-Su, Urusbieh, the first ascent of Mount Elbrus (in Kabardino-Balkaria and Karachay–Cherkessia), and the Nakhar Pass (in Georgia).

The Frosty Caucasus was republished in a facsimile edition by Adamant Media Corporation in February 2002 (ISBN 978-1402184468).

The article in PDF can be downloaded by clicking here (3.64 MB)

"It is claimed that Svanetia is a paradise, inhabited, it is true, by demons, which does nothing to detract from its magnificence, and I have been, in Abkhazia (province to the west), in ecstasy before the vegetation quite differently magnificent from that in the Italian Alps. I am convinced that Svanetia and Abkhazia would obtain from a jury of painters considerably more votes than the valleys of the southern slope of the Mont Rose." - Florence Craufurd Grove