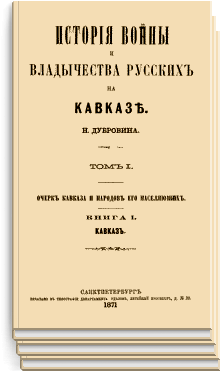 History of the War and Dominance of the Russians in the Caucasus
Author: Nikolai Fedorovich Dubrovin
Year: 1871-1888
Place of Publication: St. Petersburg, Russia
Publisher: Department of the Units
Number of Volumes: 8
Language: Russian

Dubrovin's work draws a picture of the conquest of the Caucasus by the Russians, their struggle with the local population and the times of the vicegerency. In detail are described not only the military events but also the way of life and customs of the mountain-tribes; their life before and after the bringing of Russian laws. The actions of the governors are brought out with especial care, and numerous portraits of the characters of the era of conquest are given. The events are taken up to the resignation of Ermolov and the appointment of Paskevich.

Dubrovin graduated from the Mikhail Artillery Academy. In 1869 he was assigned to the main headquarters to do military-historical work, and in 1882 he became a member of the Military Scholarship Committee. He became scholarly secretary of the Academy of Sciences in 1893 and editor of the journal Russkaia starina in 1896. Dubrovin was the author of numerous articles and monographs containing a great deal of factual material and based on an extensive use of archival data. Dubrovin’s main works include History of the Crimean War and the Defense of Sevastopol (1900), The Eastern War of 1853-1856 (1878), The Annexation of the Crimea to Russia (vols. 1-4, 1885-89), The Patriotic War in the Letters of Contemporaries (1882), History of the War and the Russian Empire in the Caucasus (vols. 1-6, 1871-88), and Pugachev and His Confederates (vols. 1-3, 1884). Dubrovin also wrote many documentary publications. He was a representative of the official school of historiography.