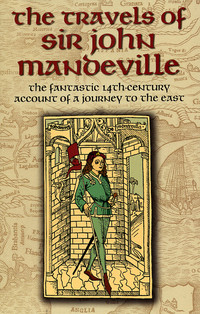 Sir John Mandeville is the supposed author of The Travels of Sir John Mandeville, a travel memoir which first circulated between 1357 and 1371. Mandeville’s Travels began to circulate soon after 1356. Though nobody is sure who wrote it, few would now give any credit to the uncompromising declaration by one of the book’s first editors, Paul Hamelius, that it was a Liège notary, Jean d’Outremeuse, any more than to the suggestion it was a certain doctor, known to have practised in Liège, Jean de Bourgogne. Read more: The Travels of Sir John Mandeville and the Moral Geography of the Medieval World, by Charles Moseley, University of Cambridge.

The full book in PDF can be downloaded by clicking here (17.4 MB) 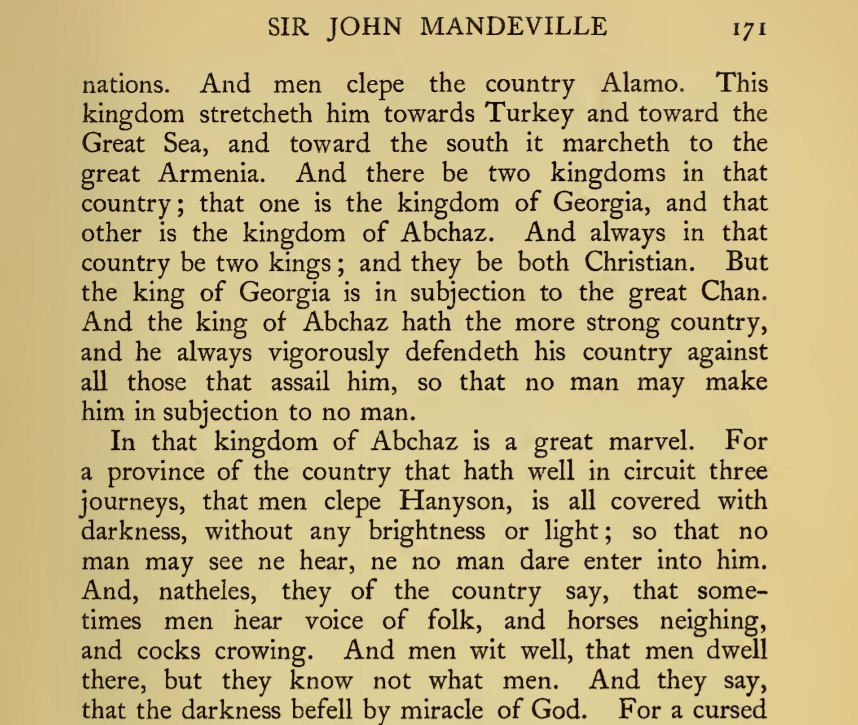 And there be two kingdoms in that country ; that one is the kingdom of Georgia, and that other is the kingdom of Abchaz. And always in that country be two kings ; and they be both Christian. But the king of Georgia is in subjection to the great Chan. And the king of Abchaz hath the more strong country, and he always vigorously defendeth his country against all those that assail him, so that no man may make him in subjection to no man.

In that kingdom of Abchaz is a great marvel. For a province of the country that hath well in circuit three journeys, that men clepe Hanyson, is all covered with darkness, without any brightness or light; so that no man may see ne hear, ne no man dare enter into him. And, natheles, they of the country say, that sometimes men hear voice of folk, and horses neighing, and cocks crowing. And men wit well, that men dwell there, but they know not what men. And they say, that the darkness befell by miracle of God.