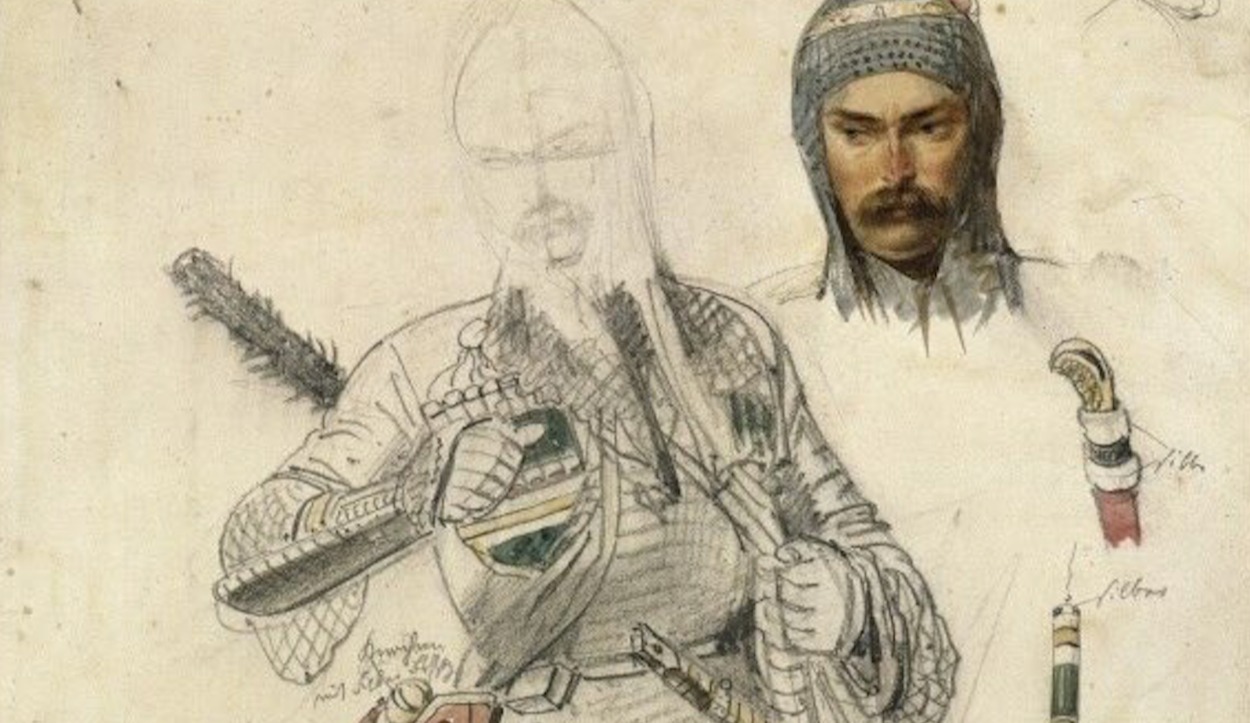 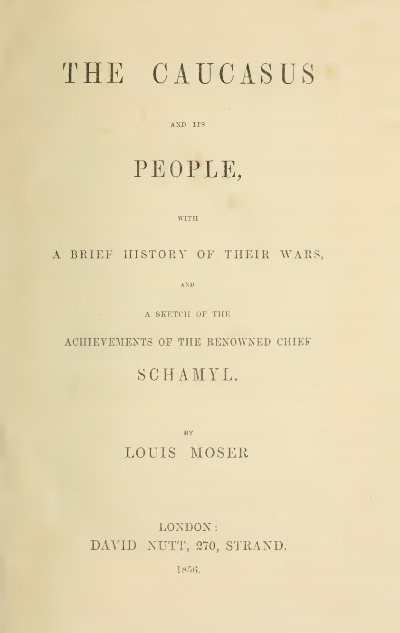 The Caucasus and its people, with a brief history of their wars, and a sketch of the achievements of the renowned chief Schamyl
Author: Louis Moser
Year: 1856
Place of Publication: London United Kingdom
Publisher: David Nutt
Number of pages: 204
Language: English

In no region of the earth are the striking contrasts of scenery, in which nature often seems to delight, more magnificently displayed than in the Caucasus. From the banks of the Don, and far and wide along the course of the Manytch and Kouma, stretches a weary waste of barren steppe country, which gradually loses itself in the inhospitable slopes that bound the Caspian Sea. Abruptly and unexpectedly, however, from this dreary and monotonous plain, there arise, first a chain of hills, and then a mighty range of mountains, towering ever higher and higher, and throwing out spurs that slope into and embosom broad, sunny, smiling valleys, while, at the same time, the loftiest peaks rise to the height of everlasting snow ; where the glaciers only melt sufficiently to feed the torrents, which leap roaring and foaming from cliff and cavern. This varied and rugged range of mountains is covered in many parts with forests of the most luxuriant vegetation, though, as we have said, its wild, sharp peaks pierce beyond the line of perpetual snow: it ex- tends from the Black Sea to the Caspian, and forms nature's boundary between the two continents of Europe and Asia; and on this range, with its numerous branches, offsets and headlands, the name of the Caucasus has been bestowed.

The full book in PDF can be downloaded by clicking here (7.3 MB)

CHAPTER II.
The Personal and Mental Qualifications of the Caucasian Races. — Princes and Nobles. — Their Privileges. — Great Public Meetings. — Brilliant appearance of the Assembly. — The Debates. — The Brotherhoods. Judicial Proceedings. — Lawful and Unlawful Robbery. — Leading features of the Caucasian character. — Slaver)'. — Trade in Girls. — Warlike Expeditions.

CHAPTER IV.
The Religion of the Caucasians. — Relics of Christianity mingled with Paganism. — Social Recreations. — Love of Music. — Homage paid to Minstrels. — Language of the various Tribes. — The Tcherkess, or Circassians. — Their beauty. — Artificial modes of improving it. — Pride of Birth among Nobles. — The Great and Little Kabardah. — The Tribes inhabiting Tcherkeskaia. — The Abassians, or Abchases.

CHAPTER V.
The Tatars of the Caucasus. — Their Appearance. — Occupations. — Religion. — Domestic Life. — The va- rious Tribes. — Kumick Tatars. — Turcomans. — The ever-burning Fire on Cape Abcharan and else- where. — The Nogay Tatars. — Their Mode of Life. — The Suanes. — The Ossetes. — Singular Kind of Hospitality. — The Geographical Limits of their Territory. — The Dugores. — The Kists, etc. — The Lesghians. — Beauty and High Character of their Women, etc.

CHAPTER VI
THE "SVAKS OF THE CAUCASUS. The Caucasus in Ancient Times.—Remains of a great Wall across the Mountains.—A glance at the Ancient History of Georgia.—Russian Progress from the time of Peter the Great.—Under the Empress Catherine.—First Settlement of the Cossacks. — Russian Intrigues in the Kabarda.—Great number of Forts built in and near the Caucasus.

CHAPTER VII.
The Mission of Sheik Manzur.—His success in agitation. —The Russians again victorious. —The Sheik taken prisoner. —Various warlike movements.—The Russian frontier extended. —The Will of the King of Georgia.—Russia takes possession of the Country. —Prince Zizianoff assassinated. —More Fortresses built. —Assassination of the Russian Ally by his own Son.—The Trans-Caucasian Provinces.—The Tartar General Yermoloff.—Daring Exploits on both sides.—Arslan Bey.—Kasimullah.

CHAPTER VIII.
Further Exploits of Kasi-Mullah — March through Daghestan. — Takes Tarku by storm. — Defeated by General Kochanoff. — Surprise of Kislyar. — Repeated Revolts of the Dsharan Tribes. — Campaign of General Rosen. — Hirari destroyed and KasiMullah killed. — Hamsad Bey becomes the leader of the insurgents. — Assassination of the Khanum and her sons. — Is himself in turn assassinated in the Mosque. — Guerilla warfare.

CHAPTER IX.
Schamyl's birth and early youth. — His natural quali- fications for the mission he assumes. — Russian advances into Georgia, etc. — Schamyl's first appear- ance on the theatre of the war. — Capture of Himri. — Schamyl's mysterious disappearance. — Fights a pitched battle with the Russians. — Russians com- pelled to retire from Achulko. — The arrival of the Czar. — Achulko taken. — Schamyl's escape. — Various events of the war.

CHAPTER X.
Prince Woronzoff appointed to command the army of the Caucasus. — His unlimited authority. — Sufters repeated defeats. — Change in the Russian plan of warfare. — Schamyl ravages the Kabarda. — The Grand Duke Alexander arrives. — Schamyl attacks the forts on the Black Sea. — Makes a descent on Armenia. — Gains a complete victory. — Inaction of Schamyl during the last year or two. — Specimens of his oratory. — Instance of his stern discipline. — Present state of the Caucasus.

CHAPTER XI.
The grand objects Schamyl has had in view. — His religious system. — Three stages of progress. — The Murids. — The Naibs. — The Murschids. — Personal appearance of Schamyl. — His mode of life. — His present abode. — The future prospects of the Cau- casians.