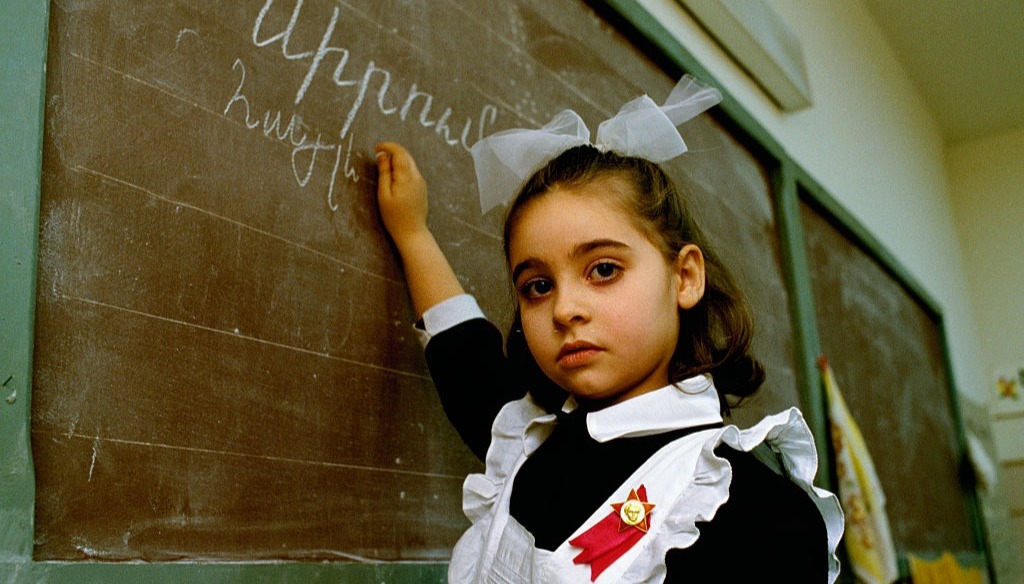 An Armenian girl writes on the chalkboard at school (1988) 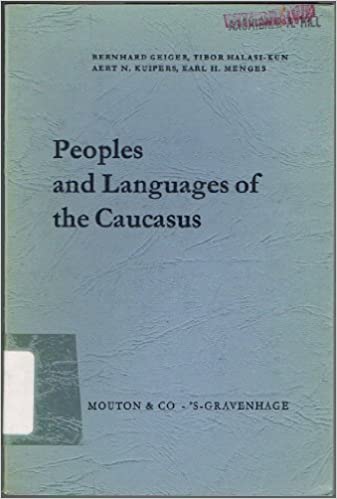 PREFACE
The student or scholar who in the course of his work has to deal with the peoples of the Caucasus is confronted with an ethnographical labyrinth, in which he is the more likely to lose his way as in nine cases out of ten his field of specialization centers outside the Caucasus. The synopsis presented here is in the first place intended to be a guide for the Turkologist, Iranist, Slavist, or Soviet special-. ist, for all of whom the Caucasus is, to a greater or lesser degree, a marginal area. In the second place, the authors hope that the work will be of use to Caucasiologists as an aide-memoire. And last not least it is intended for the student of linguistics, anthropology, history or geography who wishes to specialize in the. Caucasus; it is primarily with him in view that a bibliographical appendix on the Caucasus is included.

The data refer to the present-day linguistic-ethnic situation in the Caucasus, with the following proviso: peoples who were expelled from the Caucasus during World War II (Chechen, Ingush, -Karachay, Balkar) are included, and peopleS of European origin, not primarily associated with the Caucasus — Russians and Ukrainians on the one hand, and minor groups like Greeks, Baits, Ger-- Mans, etc., on the other — are left out of account. The gradual return of the Chechen, Ingush, Karachay and Balkan to their homeland in the Caucasus has been announced in the USSR.

The peoples are numbered consecutively without further group-ing. A survey of the genetic interrelationships of the languages spoken in the Caucasus. is found on p. 9f. It must be borne in mind that the exact genetic relationships of the Paleocaucasian languages, both as to the three major branches and with regard to some of the internal groupings of the North-Eastern branch, are as yet uncertain: Under each heading (proposed standard English designation) the following information is included: Name (Self-designation; English variants, if any; Russian designations; other designations, where relevant); Number and Location (with references to related groups outside the Caucasus); Subdivisions (linguistic, religious, etc.); Language (literary status; external relation-ships); brief indications of Traditional Economy and Religion. A certain amount of repetition, particularly in the sections on language, is necessary in order to achieve maximal efficiency for the purposes of reference. The Index of ethnic and linguistic names pursues the same goal.

The principles followed in transcription and transliteration, which have been made to conform as much as possible with English usage, are set forth on page 8. The bulk of the material -contained in the Synopsis was prepared in the course of a research project on the Caucasus carried out at Columbia. University for the Human Relations Area Files (cf. HRAF Subcontradtor's Monograph The Caucasus (1956), pp. 417-502).

The responsibility of the individual authors was distributed as follows: Caucasian: Dr. Kuipers; Indo-European: Dr. Geiger and Dr. Kuipers; Turkic: Dr. Halasi-Kun; Mongolian: Dr. Menges; Semitic: Dr. Geiger. Of course, 'the authors have all benefited from each gales comments and suggestions. The bibliography was prepared by'Dr. Kuipers in consultation with the other authors.

The data on peoples and languages were distributed in mimeographed form to a number of interested scholars and institutions. For critical remarks and additional data, which were utilized in preparing the final draft for publication, the authors are indebted to Professor Gerhard Deeters, Bonn, Professor Carl L. Ebeling, Amsterdam, Dr. Dale I. Purtle, Professor Hans Vogt, Oslo, and others. Thanks are also due to Mrs. Eloise Jelinek for compiling the index, to Miss Jane Gaitenby for reproducing the map, and to Mr. Elbridge Hathaway for assistance in the. preparation of the manuscript.

The full book in PDF can be downloaded by clicking here (3.38 MB)