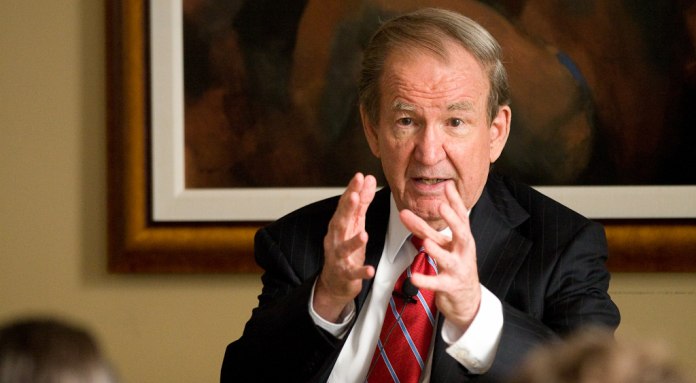 Hopefully, Russians realize that our House of Representatives often passes thunderous resolutions to pander to special interests, which have no bearing on the thinking or actions of the U.S. government.

As ex-Rep. Ron Paul writes, House Resolution 758 is so “full of war propaganda that it rivals the rhetoric from the chilliest era of the Cold War.”

H. R. 758 is a Russophobic rant full of falsehoods and steeped in superpower hypocrisy.

Among the 43 particulars in the House indictment is this gem:

“The Russian Federation invaded the Republic of Georgia in August 2008.”

Bullhockey. On Aug. 7-8, 2008, Georgia invaded South Ossetia, a tiny province that had won its independence in the 1990s. Georgian artillery killed Russian peacekeepers, and the Georgian army poured in.

Only then did the Russian army enter South Ossetia and chase the Georgians back into their own country.

The aggressor of the Russo-Georgia war was not Vladimir Putin but President Mikheil Saakashvili, brought to power in 2004 in one of those color-coded revolutions we engineered in the Bush II decade.

H.R. 758 condemns the presence of Russian troops in Abkhazia, which also broke from Georgia in the early 1990s, and in Transnistria, which broke from Moldova. But where is the evidence that the peoples of Transnistria, Abkhazia or South Ossetia want to return to Moldova or Georgia?

This is rank Russophobia masquerading as democratic principle.

What do the people of Crimea, Transnistria, Georgia, Abkhazia, South Ossetia, Luhansk or Donetsk want? Do we really know? Do we care?

And what have the Russians done to support secessionist movements to compare with our 78-day bombing of Serbia to rip away her cradle province of Kosovo, which had been Serbian land before we were a nation?

But there was no air, land or sea invasion. The Russians were already there by treaty and the reannexation of Crimea, which had belonged to Russia since Catherine the Great, was effected with no loss of life.

Compare how Putin retrieved Crimea, with the way Lincoln retrieved the seceded states of the Confederacy — a four-year war in which 620,000 Americans perished.

Russia is charged with using “trade barriers to apply economic and political pressure” and interfering in Ukraine’s “internal affairs.”

This is almost comical.

The U.S. has imposed trade barriers and sanctions on Russia, Belarus, Iran, Cuba, Burma, Congo, Sudan, and a host of other nations.

Economic sanctions are the first recourse of the American Empire.

And agencies like the National Endowment for Democracy and its subsidiaries, our NGOs and Cold War radios, RFE and Radio Liberty, exist to interfere in the internal affairs of countries whose regimes we dislike, with the end goal of “regime change.”

Was that not the State Department’s Victoria Nuland, along with John McCain, prancing around Kiev, urging insurgents to overthrow the democratically elected government of Viktor Yanukovych?

Was Nuland not caught boasting about how the U.S. had invested $5 billion in the political reorientation of Ukraine, and identifying whom we wanted as prime minister when Yanukovych was overthrown?

H.R. 578 charges Russia with backing Syria’s Assad regime and providing it with weapons to use against “the Syrian people.”

But Assad’s principal enemies are the al-Nusra Front, an al-Qaida affiliate, and ISIS. They are not only his enemies, and Russia’s enemies, but our enemies. And we ourselves have become de facto allies of Assad with our air strikes against ISIS in Syria.

And what is Russia doing for its ally in Damascus, by arming it to resist ISIS secessionists, that we are not doing for our ally in Baghdad, also under attack by the Islamic State?

Have we not supported Kurdistan in its drive for autonomy? Have U.S. leaders not talked of a Kurdistan independent of Iraq?

H.R. 758 calls the President of Russia an “authoritarian” ruler of a corrupt regime that came to power through election fraud and rules by way of repression.

This is the sort of ultimatum that led to Pearl Harbor.

Why would a moral nation arm Ukraine to fight a longer and larger war with Russia that Kiev could not win, but that could end up costing the lives of ten of thousands more Ukrainians?

Those who produced this provocative resolution do not belong in charge of U.S. foreign policy, nor of America’s nuclear arsenal.

Patrick J. Buchanan is the author of Churchill, Hitler, and “The Unnecessary War”: How Britain Lost Its Empire and the West Lost the World.