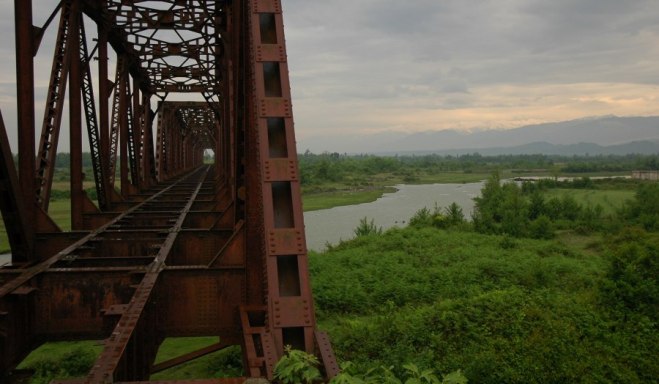 A defunct railroad truss bridge over the Ingur river, which forms the Georgia Abkhazia administrative. The railroad was cut during in 1993 during the Georgian-Abkhazian war. Photo credit, Ian F. Carver

In a recent poll conducted in Georgia by the National Democratic Institute, 68 percent of respondents expressed their approval of a Georgian pledge to reestablish their country’s railway link with Russia via the breakaway region of Abkhazia[1]. With the smoke now clearing in post-election Georgia, barriers to regional integration are slowly coming down in a region that has only seen increased political and economic divide in recent years. By exploiting its unique and historic geostrategic location, Georgia is now in the position to reverse this trend and put regional integration back on track through joint infrastructural projects and political dialogue in the neighborhood.

As the sole railway linking Georgia and Russia, the Trans Caucasus Railway was built by Tsarist Russia and later expanded during the early Soviet period. The strategic railway was cut in the run-up to a bloody civil war between Georgia and its separatist region of Abkhazia in the wake of the Soviet Union’s demise. Consequently, and combined with the Nagorno Karabakh conflict in neighboring Azerbaijan during that period, rail links between Russia and landlocked Armenia also ceased, leaving till now only an air bridge for Russia to resupply its 5,000 strong troop outpost in the country.

A change in tune

With the change in Georgia’s government on October 2nd, which saw staunchly anti Russian President Mikhail Saakashvili’s United National Movement party lose to current Prime Minister Bidzina Ivanshvili’s Georgian Dream coalition, direct talks have been re-launched between Georgia and Russian diplomats - the first to be held since bilateral relations broke down following the Georgian-Russian war in 2008.

In addition to improving Georgian-Russian relations, Ivanishvili has promised efforts to resolve Georgia’s conflicts with its breakaway regions. The most concrete sign has been his promise to consider restoring the railway link with Abkhazia, albeit the current state of relations between Georgia and Abkhazia remains a significant hurdle.

Abkhazia’s Deputy Foreign Minister Irakli Khintba explained that because Saakashvili never acknowledged the existence of the Georgian-Abkhaz conflict, instead conceptualizing it only as Georgian and Russian conflict, today very little of what was possible before August 2008 is possible now. “The realities have changed and this is why we do not have any enthusiasm or see any prospects in dealing with Ivanishvili on the matter of our future.”

Nevertheless, and without any expectations that Georgia will recognize Abkhazian independence under the current leadership in Tbilisi, which resembles a power sharing arrangement between Ivanishvili and Saakashvili, Khintba explains that the railway project could be negotiated as part of a larger package, which would include a guarantee of non-resumption of violence from Georgia. “But at the same time,” adding, “we should be quite certain that if a railroad runs from Armenia to Russia through Georgia and Abkhazia, Abkhazia should be the legal owner of its section of the railway.”

Several attempts were made to move the railway project forward between 2003 and 2005. A consortium involving Russia, Georgia and Armenia was created to rehabilitate the war-torn Abkhazian section of the railway but the talks eventually broke down due to technical reasons, including the absence of Abkhazia in the negotiating format. However, this was before Russia officially recognized Abkhazia, along with South Ossetia, as independent states immediately after the August 2008 war. Naturally, this new reality has complicated negotiations for the Georgian leadership.

“If those people who are interested in this railway are indeed serious, they should do their best to make sure that Abkhazia is an equal stakeholder in this project,” says Khintba. “But of course it is necessary to calculate the political risks as it impacts our future. The level of trust between Abkhazia and Georgia is now below zero.”

Arda Inal-Ipa, the Director of the Center for Humanitarian Programs, a prominent Abkhaz NGO, describes that there is a strong division and a siege mentally in Abkhaz society that makes any talk about regional integration with Georgia to be perceived as hostile. “We learned how to live in very severe economic conditions while under international sanctions. There are many people who do not want to push for joint economic projects since they could turn out to be dangerous for us. I do not think this is the right position, but many people want to avoid what they see as threats. They simply do not want to run the risks of confronting challenges, which could bring about new economic opportunities.”

Inal-Ipa thinks that some threats to Abkhazia are no longer realistic given the new reality in Abkhazia and Russia’s security guarantee that came with state recognition but that there are still “some old views in society that are largely based on past realities.”

Dependence on Russia and Uneven Development

Nonetheless, there is another part of Abkhaz society, Inal-Ipa states, represented by the business sector, which wants to change the situation in the country and society’s attitude. “We understand that there are a lot of problems in Abkhaz society and we have to earn our own money in order to support ourselves.”

Beyond direct assistance from Russia following recognition in 2008, Abkhazia’s economy has been almost totally dependent on foreign tourists, mostly Russians and Ukrainians seeking inexpensive holidays. According to Inal-Ipa, there is a need to diversify Abkhazia’s economy because “focusing entirely on tourism, for example as some would advocate, will not only have environmental consequences, but cultural ones as well.”

Moreover, since recognition, Abkhazia has received 2 billion rubles (65 million USD) in credit from Russia to restore infrastructure, including most of the Abkhaz section of the railway north of the Abkhaz capital of Sokhum. The way these funds were allocated was largely viewed as lacking transparency within Abkhazia, especially considering that a Russian company was awarded the contracts.

This lack of economic diversification and what many observers call “uneven development” is partly the result of Georgia’s insistence on sticking to its Western-backed policy of “engagement without recognition” in its relations with Abkhazia.

Paata Zakareishvili, a senior fellow at the Institute for the Study of Nationalism and Conflict, prior to taking up the post of Georgia’s Minister of Reintegration in October, 2012 wrote in an International Institute for Strategic Studies article that few “practical steps have been taken to weaken the republic’s growing dependence” on Russia. Zakareishvili advocates the use of soft power by the “international community to engage the republic’s citizens in economic projects, legitimize their international exports, and use their territories for transit of goods and for the movement of people from within the wider region.”[2]

Railway in light of WTO

Regardless of Western approaches to engage Abkhazia, or a lack thereof, new trade policies such as World Trade Organization and a fledgling Russian economic alliance between regional nations will do much to promote the need to restore the railway link in the years ahead. Even before Ivanishvili came to power, Russia’s accession to the WTO in August 2012, after reaching a deal with Georgia on customs control was a key step in this direction. Since two of Georgia’s three border crossings with Russia are controlled by separatist authorities, the agreement called for the construction and international monitoring of customs control posts on both the Russian and Georgian borders of Abkhazia and South Ossetia, with the length of their territories designated as “trade corridors.”

Though some groups in Abkhazia tried to prove that Russia was infringing on Abkhaz interests and sovereignty by concluding the agreement, according to Khintba, the Russian-Georgian agreement on establishing customs control posts means that “Georgia recognizes the existence of a state border with Abkhazia.” However the state borders are interpreted, the issue of customs control – a key sticking point in previous negotiations over restoring the railway – is now seemingly resolved.

“In some sense, the railway can be linked to the WTO process. Since we would collect customs and transit fees from goods exchanged between Russia and Georgia, the railway would be very much advantageous for Abkhazia,” Khintba says. “In this context, the existence of such a railway can be justified but first we need to legitimize the need to actually start talks [with Georgia] on this matter because for now there is no consensus within society,” he concludes.

The reconnected railway would also reinforce ongoing efforts by Russia to increase economic and security integration in countries along its periphery as Moscow expands its Customs Union, a key pillar of the anticipated Eurasia Union, among former Soviet states. The Customs Union envisions a measured phasing out of customs duties and the boosting of internal trade between member nations. While Georgia still remains oriented towards NATO and the European Union, both of which have uncertain futures, Georgia could benefit greatly by facilitating increased and more efficient trade between Russia and Armenia, a country with which Russia shares no land border but has thus far remained closely aligned with existing Moscow backed economic and security structures.

In fact, during a November 16 meeting in Yerevan between representatives of former Soviet republics, Armenian Prime Minister Tigran Sargsyan spoke in favor of reconnecting the Abkhazia-Georgian section of the railway. “Railway transportation is comparatively cheaper and if the railway becomes operational, the cost of transportation will be reduced. Many sectors are interested in [the railway] as their incomes will increase and Armenia’s economy will benefit,” stated Sarksyan.[3]

The Georgian leadership must first make a sincere effort to engage Abkhazia as an equal party if the railway project is to ultimately move beyond political campaign rhetoric. Once this is accomplished, Georgia will be well positioned to demonstrate itself as a true regional leader, not only in terms of facilitating increased trade and transit of people throughout the region but by being the catalyst that makes all this happen. Much more is involved here, as on the geopolitical level there are outside interests that may not want to alter the status quo of the region serving as a hub for Western energy interests. Having said this, Georgia must navigate carefully, as it balances its stated foreign policy objectives and existing trade obligations with ever-changing and evolving regional dynamics and often competing economic interests of neighboring and other countries in the near abroad.

Ian Carver has been living in Georgia since 2006 and works in the field of global development. He visits Abkhazia on an regular basis.

The views expressed in this commentary are the author's own and do not necessarily reflect those of Abkhaz World.