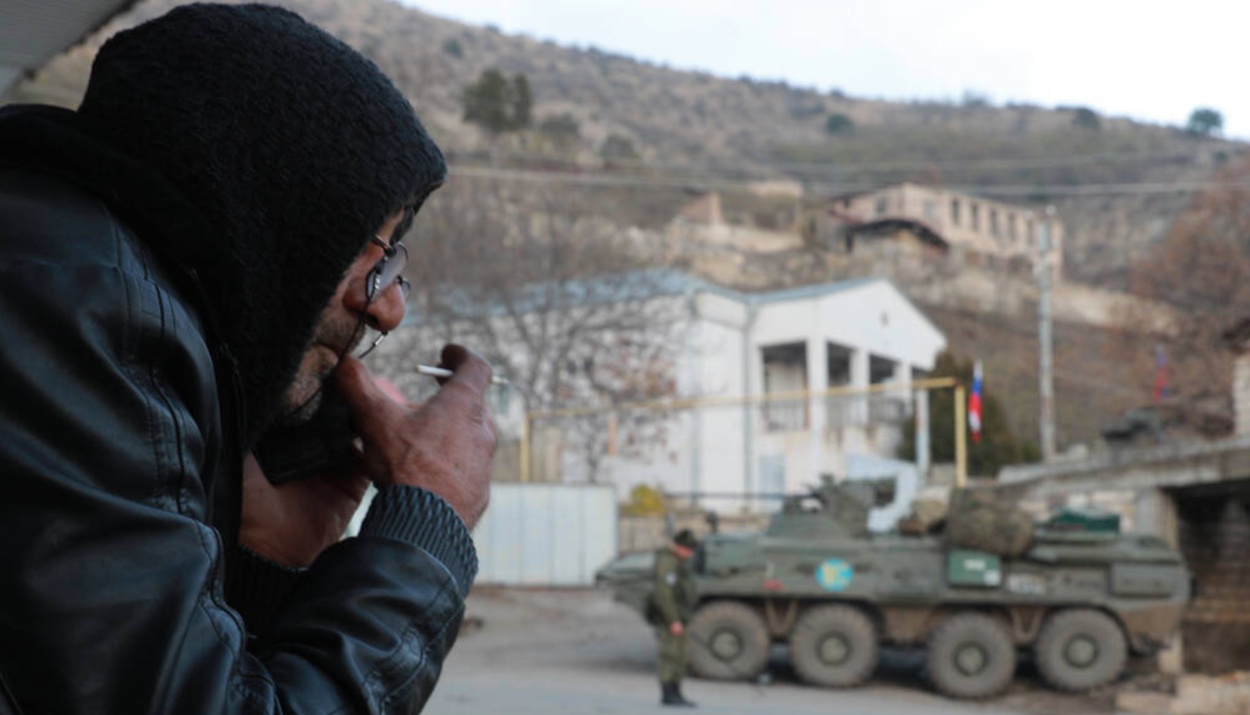 A local man smoking against the background of Russian peackeepers in the town of Lachin (Berdzor).

In his assessment of the situation created by the agreement of November 10 between Russia, Armenia, and Azerbaijan (‘Some lessons to be learnt from the Karabakh war,’ AbkhazWorld, November 30), Dieter Boden makes some valid points but conveys a general impression that is perhaps unduly negative and pessimistic.

The agreement, according to Boden, is ‘conceived by one side as a triumphant victory and by the other as a humiliating defeat.’ However, not all Armenians share this perception. Video interviews on Youtube reveal a cautious optimism in Armenians returning to Karabakh. After all, the original aim of the Karabakh Movement of the late 1980s – to remove Karabakh and a corridor connecting it to Armenia proper from subordination to Azerbaijan – has finally been achieved (except for Shusha). By contrast, other Armenians clearly do feel that they have suffered a humiliating defeat, especially those who settled in areas surrounding Karabakh that were conquered by Armenia and must now be returned to Azerbaijan.

The outcome could have been much worse for Armenia. Azerbaijan has acquired military superiority and was on a winning streak. Karabakh itself was under threat. If it had been lost, even Armenia proper might have been endangered. The agreement averted these dangers. That is why President Pashinyan signed it.

Some sort of victory for Azerbaijan may have been a necessary precondition of a peace settlement. By wiping out the dishonor of earlier defeat, victory may have made peace – and the concessions it is likely to require -- morally and emotionally acceptable to Azerbaijan. Recall how Egypt’s initial military success in the Yom Kippur War of 1973 enabled Sadat to make peace with Israel.

It is true that the future legal status of Karabakh has not been regulated. That was hardly to be expected at this stage. Everything depends on what happens next. The deployment of Russian peacekeeping forces ensures no further hostilities for at least five years. Will the conflict merely be frozen, like that between Georgia and Abkhazia? Or will there be a process of confidence building and progress toward a peace treaty and eventual reconciliation? Such progress requires strenuous efforts, not just by governments but above all by civil society, including the ethnic diasporas.

Boden mentions the legacy of the Armenian genocide of 1915. Unfortunately, this legacy does have a bearing on the current conflict, quite apart from the matter of Turkey’s support for Azerbaijan. Although Azerbaijanis had nothing to do with the genocide, being part of tsarist Russia at the time, many Armenians fail to distinguish them from Turks. In their eyes Azerbaijanis too are ‘Turks.’

One essential precondition of progress toward reconciliation is a much wider acknowledgment of the fact that both sides in the conflict perceive themselves as victims and have some objective basis for doing so. Before the current conflict arose in 1987—88 there were about 380,000 Armenians living in Azerbaijan (not counting Karabakh) and about 200,000 Azerbaijanis living in Armenia. These 580,000 people were terrorized; almost all of them fled their homes and became refugees. The persecution of Armenians in Azerbaijan fed on the persecution of Azerbaijanis in Armenia and vice versa. For instance, the first wave of Azerbaijani refugees from Armenia settled in the Azerbaijani city of Sumgait and it was there that the first pogrom of Armenians in Azerbaijan took place. Later another million Azerbaijani refugees (strictly speaking, IDPs – internally displaced persons) were created by Armenian conquest of areas surrounding Karabakh.

Boden regrets that the OSCE, the European Union, and the United Nations were not involved in negotiating the agreement. Russian leaders felt that too little account had been taken of their opinion in regulating the conflicts in the former Yugoslavia, and this had led them to reaffirm the division of Europe into Russian and Western spheres of influence. That was yet another blow to the cause of common security in Europe. However, I do not see how the involvement of international organizations would have resulted in a better agreement. On the contrary, an old saying comes to mind: ‘Too many cooks spoil the broth.’ Russia and Turkey are the two main powers directly bordering on the Caucasus; as such they are well placed to make the agreement stick.

It should be noted that the agreement does not exclude agencies of the United Nations from involvement in the region of the conflict. Point 7 specifies that the United Nations High Commissioner for Refugees is to supervise the return of refugees and IDPs to Karabakh and surrounding areas.

Finally, I would like to revive a proposal that I remember discussing with Elmar Mammadyarov when he was an exchange student at Brown University’s Center for Foreign Policy Development in 1989—90. That was a few years before he became foreign minister of Azerbaijan, a post he occupied from April 2004 to July 2020. The proposal was for an exchange of territory between Armenia and Azerbaijan. Karabakh would go to Armenia in exchange for Zangezur, a mountainous area, formerly inhabited by Azerbaijanis, along the western side of Armenia’s southern salient. Zangezur borders on Nakhchivan, an exclave of Azerbaijan into which the ceded area could be incorporated. A quid pro quo of this kind would make it easier for Azerbaijan at last to abandon its claim to Karabakh.

Stephen Shenfield is an independent researcher and translator. He was born in the UK and currently lives in the United States. He is the author of the book "Russian Fascism: Traditions, Trends and Movements" (published in 2001 in New York), as well as numerous articles and studies involving the problems of the Caucasus region. He has his own website - www.stephenshenfield.net