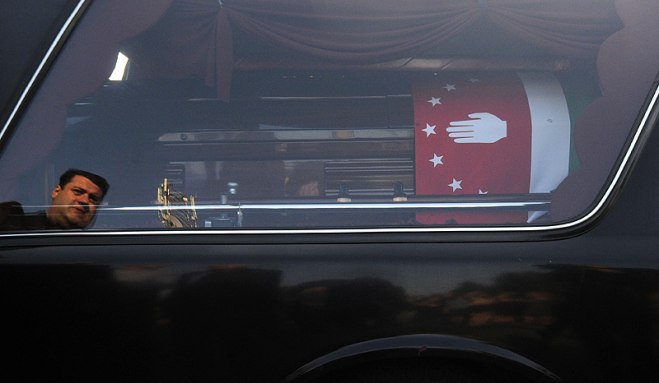 The second president of Abkhazia Sergei Bagapsh passed away on May 29, 2011

Sergei Bagapsh was a strong and intelligent political leader. He was composed, courageous, cheerful and sincere, possessing great talent of a true high-level politician and an undeniably charismatic personality. Bagapsh came to power against the will of Moscow, but made it recognize him as a real player and unlike most of politicians of the post-soviet countries he had sincere support of his own people. It’s astonishing that such a small country like Abkhazia had two of such distinguished political leaders as Bagapsh and his predecessor, the first president of Abkhazia – Vladislav Ardzinba.

It is regularly forgotten that the independence of Abkhazia started not with it’s recognition by Russia in August 2008, but as a result of its own effort to achieve independence and the victory in the armed conflict with Georgia 15 year before. And Russian recognition of Abkhazia’s independence was not a charitable gesture, but was aimed at fulfilling the strategy and national interest of Russia in the region and in the international politics altogether. From the beginning I supported that decision and still consider it to be a very strong move by Medvedev. As a result of it, Russia not only gained an ally in the destabilized region, but also a new opportunity to protect and promote its interests in the Caucasus region, whilst Georgia has lost Abkhazia as a result of its own political mistakes and miscalculations.

The work of Sergei Bagapsh and his team made the independence of Abkhazia and the likelihood of it succeeding as a sovereign (and democratic) state much more realistic. It’s hard to forget the wise decision made by Sergei Bagapsh during the conflict in 2008 when he refused to listen to any promises, persuasions or threats coming from different sides. Although the obstacles on the path of independent Abkhazia are still there, a lot of them in fact having appeared only after the fact of recognition by Russia.

The passing of president Bagapsh came as a shock and it is a grim tragedy to the small country. But I know that among his colleagues there are people who can continue his work on building democratic and independent Abkhazia and succeed in acquiring broader international recognition. It is quite clear, that getting this recognition along with developing the national economy would become the main goal of the next president.

In fact the forthcoming presidential election will inevitably become a test of the maturity of Abkhazian establishment and society altogether. It will become a test of effectiveness of the government system that exists in Abkhazia, a system that is actually significantly more democratic than those of Abkhazia’s neighbors. It will become a test of country’s resolution to have a true independence, not an independence paid for by someone from outside. It’s possible that we will witness increased international activity concerning Abkhazia in the next several months as well: Russia, Georgia, Turkey and, of course, the Western countries. The presidential elections in Abkhazia will become a test of Moscow’s respect towards its own decision to recognize Abkhazia’s independence, since Abkhazia is more than capable of electing its own new leader. For Georgia it will be a test of its ability to build proper system of national interests. And for the West it will become a reality check and a test on their ability to recognize the political realities of Caucasus region and to base their decisions on those realities, instead of some abstract ideological concepts. In the recent years this process of international involvement with Abkhazia has slowly started to expand, mostly due to the diplomacy, patience and active work of Sukhum.

The process of development of new political geography that started two decades ago is still taking place in the Post-Soviet World. Sergei Bagapsh contributed greatly to Abkhazia’s role as one of the players and not as a passive hostage of someone else’s decisions and interests in this process. The people of Abkhazia must be grateful to this person and so should be Russia. I believe that a time will come, when the role that Sergei Bagapsh  played in the history of Post-Soviet World will be perceived differently even in Georgia. He was a true man of peace and could quote Pericles who had managed to keep Athens out of war for 15 years that he had “never been a cause of any Athenean to wear mourning”. Today not many politicians can say the same.

Nikolai Zlobin
Director of the Russia and Eurasia Project at the World Security Institute in Washington.