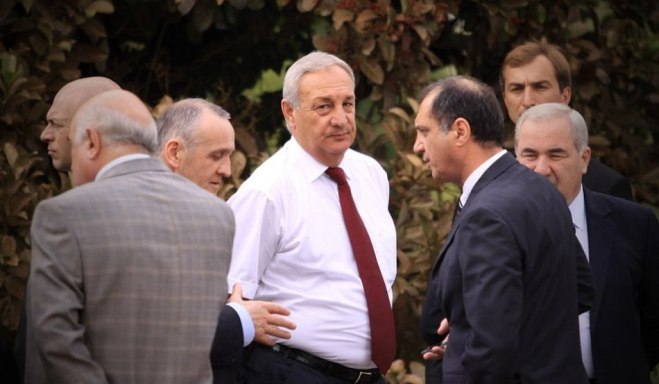 Sergei Bagapsh was the second president of the Republic of Abkhazia

The republic prepares unexpectedly to elect its third president, but Sergei Bagapsh is a hard act to follow.

Until May 29, there were no signs of political infighting in Abkhazia. But now, the death of Abkhazia’s second president, Sergei Bagapsh, has changed the country’s political agenda overnight. Bagapsh died unexpectedly and comparatively young (at the age of 62), and, more importantly, the Abkhaz leader died in the middle of his second term without leaving an heir.

But Abkhazia owes a debt to Sergei Bagapsh. The Abkhaz people will always associate his name with the republic’s international recognition, and the hard years of political and economic instability, civil unrest and permanent readiness for a war with Georgia are over thanks to him. Bagapsh was a talented diplomat who preferred negotiating to fighting whenever possible. It is thanks to his efforts that power was transferred peacefully from Abkhazia’s first president, Vladislav Ardzinba, in 2004-2005. For post-Soviet Georgia, this remains an unattainable goal, despite all the advances given to this "beacon of democracy." Bagapsh’s sudden death, however, has forced the Abkhazians out of the lull of their Golden Age dreams and into preparations for the next presidential election.

Although none of the republic’s leading politicians have declared their desire to run for the vacant post, the most likely candidates are known. Under the Abkhaz Constitution, in the event of the president’s death, his duties shall be performed by the vice president until elections are held. Today, this is Alexander Ankvab, who has a reputation as a tough and pedantic law enforcement officer who favors a harsh crackdown on corruption. One of the youngest Soviet colonels, Ankvab oversaw Abkhazia’s law enforcement system during the armed conflict with Georgia and later joined the opposition where he was a vocal critic of President Ardzinba. In the 2004 elections, Ankvab himself could not run for president because he had not lived in the republic for five years, so he threw his weight behind Sergei Bagapsh. He remained close to Bagapsh, first as prime minister and then as vice president.

Unlike the hawkish Ankvab, Sergei Shamba, another likely candidate, enjoys a reputation as a smart diplomat. Educated as a historian, he headed Abkhazia’s Foreign Ministry for many years, handling the republic’s most important negotiations. He is well known in the UN, OSCE and the European Commission. As a diplomat, he has no rivals among Abkhaz politicians. Over the past year, Shamba further strengthened his position as the republic’s prime minister. If Ankvab’s strong point is his temporary presidency, Shamba boasts international ties, and this is a strong trump card. Unlike South Ossetia, which is prepared to join Russia, Abkhazia aspires to be an independent state seeking broader international recognition.

Despite their different backgrounds. Ankvab, the former Soviet officer, and Shamba, the post-Soviet diplomat, have never had any public disagreements. As members of Bagapsh’s team they had to be cautious, supporting an image of unity. Therefore, we cannot exclude the possibility of a tandem scenario involving both politicians acting as president and vice president.

Then there is opposition leader Raul Khadzhimba, who came in second in two presidential elections. In 2004, the Kremlin and President Ardzinba supported him, and in 2009, he ran for the opposition. Today, Khadzhimba remains the outright leader of the opposition party, the Forum of Abkhaz People’s Unity. Surely he hopes the third time will prove the charm for his presidential ambitions.

There are also other politicians in Abkhazia who may not seek the office for themselves, but whose influence could determine the race. One of these secondary actors is Beslan Butba, the owner of the popular opposition channel Abaza TV. The head of the Party for the Economic Development of Abkhazia, Butba has come out against Russia’s aggressive expansion into the republic’s finances. Another figure to be considered is Daur Tarba, who chairs the United Abkhazia ruling party. Like its Russian counterpart United Russia, United Abkhazia is more part of an administrative machine than a political party as such. And yet, it justifies its name by uniting 15 percent of Abkhazia’s population. Then there is the “eternal opposer” Yakub Lakoba, who exploits his image as a fighter against corruption and injustice and who is often called Abkhazia’s Zhirinovsky after the head of Russia’s LDPR. He could also play a role in the unfolding political spectacle. Finally, Stanislav Lakoba, a reputable historian and former secretary of Abkhazia’s Security Council, could make a fine vice president. The presidency is not an option for him as he does not have a command of the Abkhaz language, but he can bring in additional votes.

For all their differences, the potential candidates still have something in common: They all support Abkhazia’s independence and see the republic’s time within Georgia as part of the past. Their views differ on Abkhazia’s relationship with Russia. They generally support strategic cooperation with Moscow, but some are wary of the republic’s openness to Russian companies. This group is encouraging the local government to seek alternative economic options in Turkey and the EU.

For Moscow, the situation is a mixed bag. On one hand, all the potential candidates are positive about Russia, for all their differences and nuances. On the other hand, it are these nuances that urge a deeper understanding of Abkhazia’s political development, making it clear that what matters is not the name of Abkhazia’s third president, but the people’s sentiments. In any case, the republic is facing a tough test: It has to peacefully pass power to a new leader who will have to assert himself as a someone capable of continuing what Sergei Bagapsh began.

Sergei Markedonov is a visiting fellow at the Center for Strategic and International Studies, the United States, Washington, D. C.

Source: Russia Beyond The Headlines