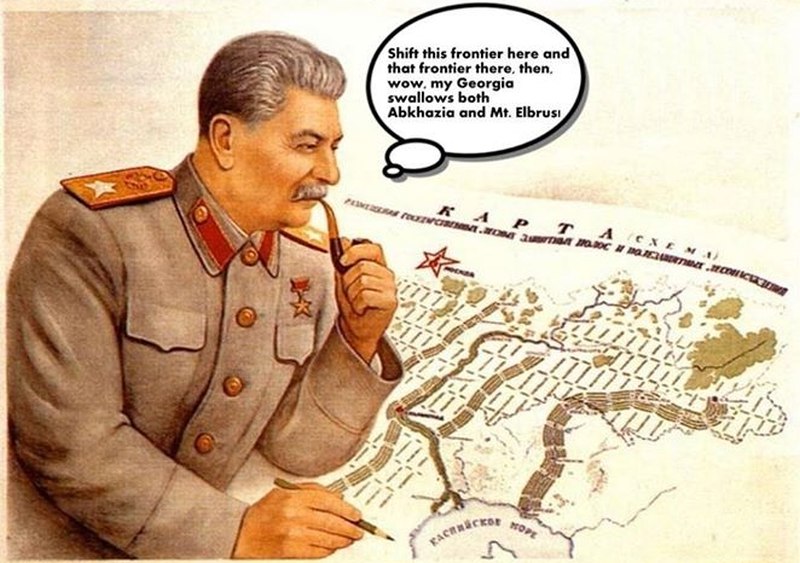 Vienna, July 7 – Among Stalin’s many mistakes as a ruler, according to a reviewer of an émigré book on Stalin republished a few years ago in the Russian Federation, was the Soviet dictator’s decision to lower the status of Abkhazia from that of a union republic (SSR) like Ukraine or Kazakhstan to that of an autonomous republic (ASSR) like Tatarstan or Udmurtia.

Had he not done so, Andrey Yezerov suggests in a review of S.V. Dmitriyevsky’s “Stalin. The Forefather of a National Revolution” (1931, 2003), Abkhazia would have gained its independence along with other union republics in 1991 and been widely recognized rather than as a result of Russian military action in 2008and recognized only by Russia and Nicaragua.

Yezerov makes this suggestion in an almost offhand manner as evidence that even though he liked Dmitriyevsky’s book, he, Yezerov, is “not a Stalinist” or inclined to provide “an apology” for the dictator. Those who want that, the Orthodox writer says, should “turn instead to the productions of Aleksandr Prokhanov.”

As evidence of his more objective treatment of the Soviet leader, the reviewer offers the following: “I already have more than once,” he says, “directed the attention [of Russians] to ‘the change’ of the Republic of Abkhazia at the beginning of the 1930s from a union republic to an autonomous one” (www.portal-credo.ru/authors/lestovka/index.php?status=txt&id=121).

This comment, delivered almost as a throwaway line, is nonetheless interesting for three reasons. First, it calls attention to one of the more curious ethno-territorial arrangements in Soviet history, an arrangement that Yezerov himself either does not fully know or is choosing to present in a disingenuous way for political purposes.

Second, his comment highlights something many have chosen to downplay since 1991: The international community did not recognize the former Soviet republics on the basis of the principle of the right of nations to self-determination but rather chose to recognize as independent states only those nations Stalin had chosen to give the status of union republics.

And third, Yezerov’s suggestion that he has been talking about this recently suggests that at least some in Moscow may be thinking about raising this issue, as risky as that may be for the Russian Federation itself, as a means of breaking the current impasse over the possibilities of international recognition for Abkhazia.

Because of the potential ramifications of such a step, these points deserve closer attention. While many people are aware of the short-lived Karelo-Finnish SSR (1940-1956) which Stalin created at a time when he hoped to absorb Finland into the Soviet Union, far fewer know that there was a second union republic that was later downgraded to autonomous status.

That was Abkhazia, but its status as a union republic was both the result of an entirely different history and had a very different legal and constitutional content than the other union republics. In March 1921, the Red Army overthrew the Georgian Democratic Republic authorities in Abkhazia and declared the formation of the Abkhazian SSR.

Two months later, after Soviet forces had occupied Georgia, the Georgian SSR recognized the independence of the Abkhaz SSR. But at the end of that year, Stalin forced Abkhazia to sign a union treaty with the Georgian SSR, something that created a common legal and constitutional space but did not extinguish Abkhazian sovereignty.

Nonetheless, even though Abkhazia did participate independently in the formation of the USSR in December 1922, it was effectively ruled by Tbilisi and thus was the only case in the history of the Soviet Union in which one union republic was subordinate to another, albeit under the cover of a larger unity, in this case, the TransCaucasian federation.

But in 1931, and reflecting Moscow’s greater self-confidence and desire for a more coherent set of power relations, Stalin forced the Abkhaz SSR to transform itself into an Autonomous Soviet Socialist Republic within the Georgian SSR, an action that sparked mass protests by the Abkhazians. (For more on this, see www.unpo.org/content/view/715/236/).

This complicated history is important now because many Western governments and indeed many of the regimes in the post-Soviet states assume that the division between union republics and autonomous republics was completely logical and reflected underlying historical realities.

After the collapse of the Soviet Union at the end of 1991, however, some Abkhaz and several Western researchers pointed to the Abkhaz case as an example of the problematic nature of the assumption that there was a completely objective basis for the division between these two statuses. But such arguments gained little attention and less support.

Now, as Yezerov’s comment suggests, there may be renewed interest in such arguments, especially among the Abkhazians and those Russians who would like to see Abkhazia more widely seen as separate and distinct from Georgia than most members of the international community view it as being now.

That the Abkhazians should raise this issue is not surprising, but Russians and especially Russian officials are less likely to given that any suggestion by them that Abkhazia was once a union republic and thus worthy of recognition calls attention to the problems inherent in the post-1991 settlement not only for the international system but for Russia itself in the first instance.

Consequently, Yezerov’s comment may remain without any serious consequences, but the fact that he says he has “more than once” talked about this suggests that others are doing so as well, a pattern that could play a role of some kind in the course of conversations among Russians, Georgians, Abkhazians and Western governments.