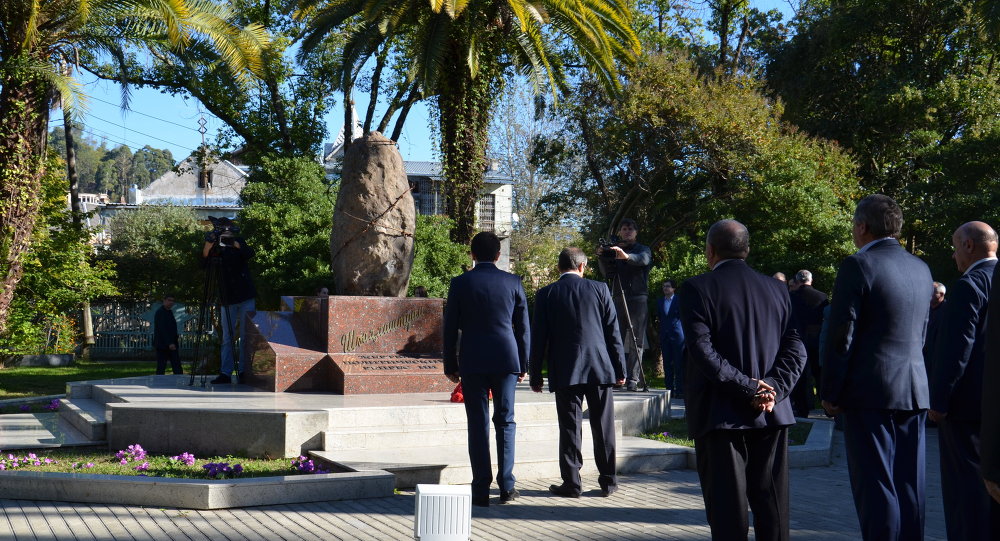 In Sukhum, in the square in front of Parliament, a monument has been set up to the victims of the political repressions of the 1930-40s. The statue is by Zurab Tuzhba. The opening ceremony was attended by President Aleksandr Ankvab, Vice-President Mikhail Logua, Speaker of Parliament Nugzar Ashuba, Prime Minister Leonid Lakerbaja, children and relatives of the repressed, members of the public and school-children.

"Today for us is one of happiness and sadness," said Irma Akirtava, daughter of one of the repressed, as she opened the meeting. "Joyful, because finally we have been given a place where we can come to light a candle and lay flowers. Sad, because today we remember our fathers, grandfathers, brothers, friends, close relatives, those who fell during the cursed years of the 30s – 40s of the last century. We are talking about about 7,000 persons. For tiny Abkhazia this was a huge, dreadful figure. Even more awful is that we, the descendants of people torn to pieces in Stalin's torture-chambers, have been unable to come to their graves, to bow our heads, to weep over them, and to pay them due respect, because we do not know where their tortured, bullet-holed corpses lie."

In the words of Irma Akirtava, it is only 50 years after rehabilitation that is has finally become possible to set up in a free Abkhazia this modest monument, one for all.

"We can all come here, to light candles, to remember, to stand, to weep. The most important thing that we can bring here our children and grandchildren and tell them about the wonderful people who passed away in the prime of life," said Akirtava. She expressed the hope that "our descendants will also come to this place to remember their ancestors." Irma Akirtava, on behalf of the Association of Victims of the Political Repressions, expressed gratitude to the leadership of the Republic for their help and support in the erection of this monument. However, she regretted that she could not express her gratitude to Sergey Bagapsh, who did much to make this monument a reality. "His departure from us was untimely, and we bow our heads to his memory," she said.

In the words of the Chairman of the Association of Victims of the Political Repressions, Anatoliy Pilia, this place must be visited by the young; people coming to Sukhum for vacation or on tour must be brought to this spot. "People should know what Abkhazia suffered in those terrible years," he said at the rally.

"It is good that in our capital city there has appeared a monument to victims of the political repressions, to which not only those who directly affected by this terrible time and their descendants but the other citizens of our country as well as visitors can come and says their prayers," said Prime Minister Leonid Lakerbaya, speaking to the crowd.

In his words, the repressions intensified after the killing of Nestor Lakoba in 1936. "Abkhazia’s political élite and intelligentsia were shot. What took place was, in effect, the extermination of everything Abkhazian – including closure of schools and banning the Abkhaz language. It was a widely thought-out policy, which lasted for many years. In 1949, the Greeks were expelled, whilst, in 1953, there was a plan to deport all the Abkhazians," he recalled.

It was then, according to Lakerbaya, when the capital of Abkhazia, Sukhum, began to be called Sukhumi. "Today, finally, we are opening a monument in a city that again carries its historical name. It is with those terrible years that Stalin's policy of transportation of populations is connected, and this is what seriously altered the demographic situation in Abkhazia and contributed to the establishment in the Republic of a "fifth column", which played a negative role in 1992, when the Georgian-Abkhazian war began," he said.

According to the head of government, "The opening of this monument is extremely important, but not less important is the fact that memory of the victims of the repressions is alive. Being consigned to oblivion is the worst thing that can be, and we must not let this happen" he stressed.

The rally was also addressed by Giorgi Dgebuadze, whose father was repressed, and he himself was arrested at the age of 11 as the son of a Trotskyite.

Member of the Commission for the Rehabilitation of Victims of the Political Repressions, daughter of one of the repressed, Irina Vardania, noted that there is no family in Abkhazia which was not affected by this terrible tragedy. "They annihilated everyone — young, old, and even children. Cut off at its roots was the only just matured Abkhazian intelligentsia — fine-looking, intelligent, educated people. They loved life, their people, their land. They were between the ages of 30 and 35, denied the chance to live full lives, and they took with them all their untapped potential. How much more might they have achieved, if they had been allowed to live?!" she said.

She remembered the first Chairman of the Association of the Victims of the Political Repressions, Mancha Benia, along with President Sergey Bagapsh, neither of whom lived to see this day.

Also speaking at the meeting were the writer Nicholaj Khashig, Head of the Communist Party of Abkhazia, Lev Shamba, and graduate of the Abkhazian State University (ASU) Angela Pataraya.

The author of the monument, Zurab Tuzhba, in his turn, said: " I tried to do everything that it was possible to do; I put amy soul into it. What is left is for you to judge how it has all turned out. Thanks to everyone who helped me in this matter. I think that my work will stand for many years in this city. " After the rally, participants in the ceremony laid flowers and lit candles of remembrance.