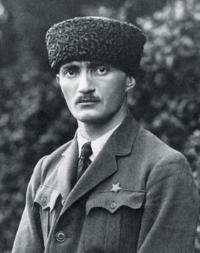 SUKHUM -- Today, in the large conference-room of the Cabinet of Ministers a solemn meeting of the public, dedicated to this anniversary, was held.

"Today, when the 120th anniversary of the birth of Nestor Apollonovich is marked, it is our duty to honour again the memory of this unique man, whose life ended tragically at the age of just 43, though he never lost the love of the people," said the leader of the Communist Party of Abkhazia. Lev Shamba.

Lev Shamba expressed the hope that the joint-efforts of the public and the government of the republic will see the completion of the renovation of N. A. Lakoba’s house-museum, which was destroyed during the period of the Georgian-Abkhazian war.

An interesting report on the life and work of Lakoba was delivered by the Director of the Abkhazian Institute of Humanitarian Studies, Vasili Avidzba. “The year 1893 produced the two leaders of the Abkhazian people, Ephraim Eshba and Nestor Lakoba, who in many respects determined its destiny," he said.

All speakers at the anniversary-meeting noted the great importance and the role of Nestor Lakoba in the history of the Abkhazian people and the state.

First Deputy Prime Minister Indira Vardania in her speech stressed how Nestor Lakoba understood his people, delved into their problems, and enjoyed unquestioned authority among them. He tried to protect his people in the difficult years of collectivisation. Nestor Apollonovich paid special attention to the socio-cultural development, education, and training of national cadres.

After the death of Lakoba (poisoned by Lavrenti Beria in December 1936 in Tbilisi), there began Abkhazia’s most tragic recent history. Terror fell on the republic, leading to the complete destruction of the political and intellectual elite of the Abkhazian people.

The poet Platon Bebia shared his memories of his student-years, when in Sukhum young Abkhazian students were advised to walk in groups as it was not safe to talk loudly in the Abkhaz language, since it irritated local Georgians.

Only in 1954k was an Abkhazian sector opened at the Sukhum Pedagogical Institute’s Faculty of Philology. Bebia recalled how with the active support of teacher Anton Konstantinovich Adleiba students created a literary circle, gathered and sang songs or recited poems in Abkhaz. Bebia stressed how in those years they were forbidden to speak aloud the name of Nestor Lakoba.

Chairman of the Council of Elders of Abkhazia Konstantin Ozgan noted the need to promote among young people such prominent Abkhazian governmental and political figures as Ephraim Eshba and Nestor Lakoba.

Speakers also stressed the need to restore the Nestor Lakoba museum and to perpetuate the memory of the Nestor’s wife, Saria Lakoba. She was one of the few female government-leaders of the USSR not to have signed any "confessional" document under inhuman torture.

In attendance at the meeting dedicated to the 120th anniversary of the birth of N. A. Lakoba were: the President of Abkhazia Alexandr Ankvab, Vice-President Mikhail Logua, Parliamentary Speaker Valeri Bganba, Secretary of the National Security Council Stanislav Lakoba, MPs, government-officials, and representatives of the Lakoba family.