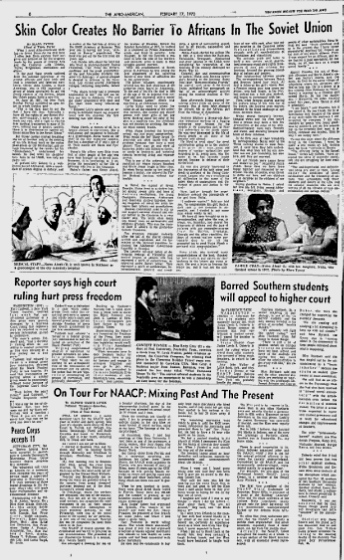 In February 1973, an African-American newspaper published a series of three articles about Africans in the Soviet Union, in particular those in Abkhazia. The article below is the final in the series. Articles has been transcribed verbatim from the original text, which was published in February 1973.

Skin Color Creates No Barrier To Africans In The Soviet Union

When I meet Afro-Americans visiting the Soviet Union for the first time I often hear them express their surprise and admiration for the progress made by the people of Central Asia and the Caucasus – the Uzbeks, Tajiks, Kirghizians, Abkhazians and others.

In the past, these people suffered from the colonial oppression of czarist officials and local lords and lead a wretched and ignorant existence. Oliver John Golden, a black American, who in 1931 organized a group of black specialists to aid the young country of the Soviets, helped the Uzbek people build a new life.

On June 20, 1937, the New York Sunday Worker published an open letter in which Gordon said:

“This is the first time in my life that I have felt free. Politically, I have all the rights of any Soviet citizen; economically, I have a right to work and rest, and a right to receive free medical treatments in  case of illness, without loss of salary; socially, there is no discrimination against national minorities in the Soviet Union.”

But Oliver Golden started breathing the air of freedom only in the evening of his life. Killing work on the cotton plantations on the Mississippi, and savage treatment by the racists for his “disobedience” undermined his health. He died when his daughter Lily, born in the USSR, was only six years old.

At present, Lily Golden is a well-known Soviet Africanist with a candidate of science degree in history, and a worker at the Institute of Africa of the USSR Academy of Sciences. This year she is having her book “Africans in Russia” republished. The book was put out for the first time six years ago.

Lily Golden tells about the Africans who lived in prerevolutionary Russia (Hannibal, Czar Peter the Great’s confidant and the great-grandfather of the poet Alexander Pushkin: the actor Ira Aldridge). A special chapter is devoted to Africans in the Caucasus. Lily visited several Abkhazian villages, including Adzyubzha, before I.

“The Abash family had a profound impression on me,” she told me before my trip to Abkhazia. “Try and get closely acquainted with them and you shall learn many interesting things.”

I followed Lily’s advice and upon arriving in Sukhumi began my acquaintance with the Abashes. My first meeting was with Nutsa.

Nutsa Abash, a woman of 40, is a typical African in appearance. She is well-known and respected in Sukhumi as a gynecologist. Nutsa works on the staff of the city maternity hospital. She has a daughter of 17 and a son of 15. Their names are Naira and Vyacheslav.

Nutsa’s life differs very little from that of other people of her age who have been brought up in Soviet land. However, it is interesting as it explains the peculiarity of the life of Africans who live in the Caucasus.

Nutsa’s father was Shirin Abash, the brother of Shabaan. Before the October Revolution of 1917, he worked as a shepherd on Prince Abashidze’s estate and lived in poverty. Like Shaaban, he did not hesitate a moment to take the side of the workers and peasants, arms in hand, in their struggle against czarism.

After the establishment of Soviet power in Abkhazia he was among the first organizers of the collective farms – a new form of collective life in the countryside.

His fellow villagers unanimously elected him the first chairman of the collective farm board in Adzyubzha. Till the end of his life (he died in 1958 at the age of 75), he enjoyed widespread respect and was decorated with a medal “For Valiant Labor”. Shirin was married to an Abkhazian woman.

Little Nutsa went to school the same as all the children of the collective farmers. She studied and played games with other girls of her age never thinking about the color of her skin in a negative way. Her childhood was not clouded by anything. She was an equal among equals.

When Nutsa finished the ten-year school, she had many opportunities. What would she be? Many Soviet 17-years-olds are often faced with this problem because they have a wide choice: They may go and work at factories, plants and collective farms, or study at institutes and technical schools receiving living and expense money.

This is one of the achievements of socialism for whose victory Shaaban and Shirin Abash fought in their time. So when Nutsa made up her mind to become a doctor, she entered the Tbilisi Medical Institute without any trouble.

In Tbilisi, the capital of Soviet Georgia, Nutsa lived at a student hostel among young girls and boys of various nationalities. The young Georgians, Abkhazians, Adzharians and Ossetians studied together, having forgotten all about the strife between their fathers and grandfathers.

Russian colonialism used to stir up and and support national discord and ethnic hatred in the Caucasus in a very clever way. The feuds often broke into bloody wars on nationalistic and religious grounds. This was the typical state of affairs in the prerevolutionary Caucasus. 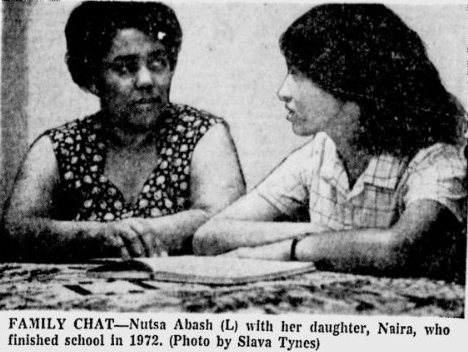 "In one bizarre twist in the tragedy the three villages of Adziuzhba, Kindigh (Georgian Kindghi) and Tamsh (Georgian Tamishi), which housed the only population of African descent in the entire former USSR, were destroyed by Georgian troops as part of the operation to besiege Tkvarchel. The fate of these unique Afro-Abkhazians has yet to be determined, though at least one survivor has been seen." Abkhazia by John Colarusso (Central Asian Survey (1995), 14(1), 75-96)

The situation changed radically after the fall of the czarist colonial system and capitalism, and the formation of the national republics including the Abkhazian Autonomous Republic in Georgia.

Nutsa Abash started her college life in 1949, at a time when the Russians, Ukrainians, Georgians, Abkhazians and other peoples of the USSR were completing the restoration of the economy of the country destroyed by World War II.

Cheerful, gay and communicative by nature, Nutsa soon became everyone’s favourite at the institute. Some time later “Komsomolskaya Pravda” the central youth paper in the Soviet Union, published her photograph as that of an acknowledged activist among the medical students of Tbilisi.

Soon afterwards, Nutsa started receiving letters from all parts of the country. One of them later changed the private life of the African girl from the village of Adzyubzha.

Semyon Bibilyov, a 26-year-old Russian technician working at a logging enterprise near Ryazan (in the middle of the European part of Russia), subscribed to the youth paper. He was very interested in the life of young people in all parts of his country and abroad.

He liked to read about the great construction going on in the country of his young fellow countrymen and women of various nationalities participating in it; young men, who the same as he, had recently fought against fascism in defense of their motherland.

He was also greatly interested in the discussions of the bold plans and deeds of members of the Young Communist League who were overcoming all difficulties in the name of the noble ideas of communism and the victory of peace and justice in the world.

One day, while looking through the paper, Bobilyov noticed the photograph of the girl from Tbilisi.

“I suddenly wanted” Bobilyov told me, “to congratulate this girl. Such a dark face is not common in our country, and I wanted to say some nice warm words to her.
“We have all been brought up as internationalists, and after the war, in which we, Russians, had shared the bitterness of defeats and the joys of victories with our comrades-in-arms from the Ukraine, Uzbekistan, Georgia and the other republics, the ideas of internationalism were particularly dear to me. All this prompted me to send Nutsa Nbash a postcard with congratulations.”

Nutsa Abash, who received many congratulations of the kind, thanked her new brothers and sisters for their kindness in the letters she wrote in reply. She sent a letter to Semyon Bobilyov too, and it was not the only one.

[?] been at war with each other was put into practice in the Caucasus under the conditions of irreconcilable struggle with all manifestations of nationalism and chauvinism.
The common goals and tasks to build a new society, which guaranteed everyone equal civil rights irrespective of race and religions distinctions, favoured the growing friendship of nations and peoples.
New relationships between people[?-AW]

The correspondence between Nutsa and Semyon lasted four years. At first it flattered the girl’s vanity that a Russian young man nine years her senior, who had fought in the war, had noticed her, a first year student, and begun to correspond with her.

Then, when Semyon started sharing his mature ideas of life with her in his letters, she became even more interested in the frank exchange of opinions between them.

Nutsa shared Semyon’s internationalists views and his firm belief that a person may have a rich life irrespective of the color of his skin. Semyon’s letters were very friendly and warm, and sincerity became the basis of their relations.

In the fifth year of their friendship by correspondence Nutsa went to the Tbilisi railway station to meet Semyon. A week later they both understood that what they felt for one another was not just friendship, but also love, and they got married.

“All our friends were happy for us and wished us joy” recollects Nutsa Abash. Since then we have been happy together and respected by everyone. No one, of course, even dared to defile our love, and our children are as carefree as that of our neighbors.”

Saying goodbye to Nutsa, I asked her how she felt living among Abkhazians, Georgians, Russians and people of other nationalities. Here is what she said: “Since childhood and up to the present day I have never encountered anything but respect on the part of my fellow citizens. First it was respect for an African, and later that for a good specialists. On the whole, we all live here as a single united family.”

Shamil Chamba, the son of Kompich (Shaaban and Shirin Abash’s sister) and Nutsa’s cousin, said the same. He lives in the same village of Adzyubzha where his ancestors settled so long ago. He is a driver of a bus running from Sukhumi to Tbilisi. Shamil is married to a Russian girl named Maria. He has two daughters – Margarita, the elder, finished school this year, while Tanya is still a schoolgirl.

“I am black,” said Chamba, but I am proud it. No one treats me in a humiliating way because of the color of my skin - quite the contrary, I am respected by everyone. I am surrounded by people who repay goodness by goodness, and we live according to the principle that man is a friend, comrade and brother. That is why I am happy here.”

To end this story about the Africans living in the Caucasus, I want to quote a few words by Lily Golden from her book, “Africans in Russia.”

“The Africans living in the Soviet Union,” writes Lily Golden. “have accepted the ideas of scientific socialism and are struggling for their realization.

“The anti-imperialist and anticolonial ideas are dear to them. Living under the conditions of internationalism and the friendship of nations, they sympathize with their brothers and sisters in the USA and the colonial countries who are still victims of all the vileness of race discrimination and savage racism.”