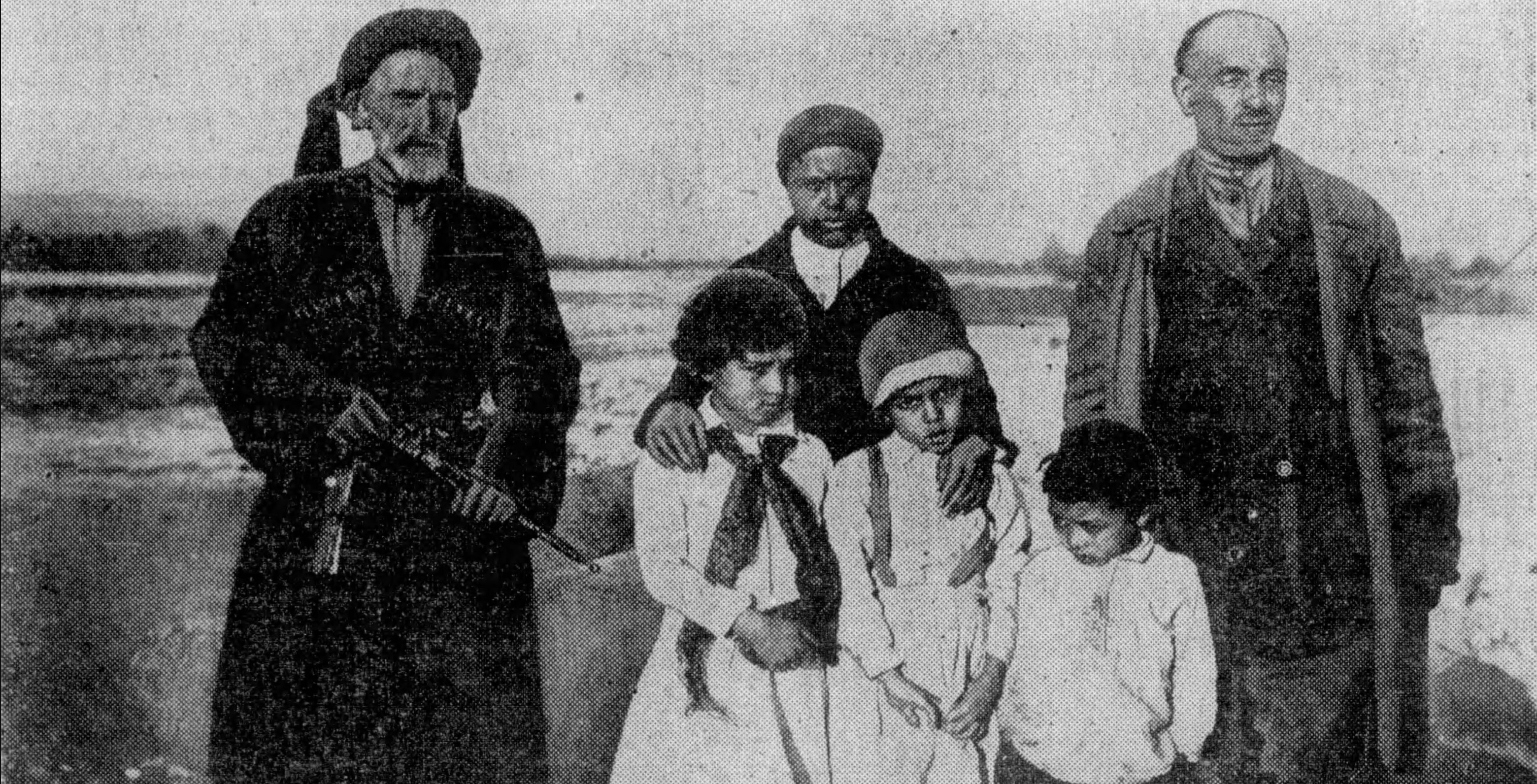 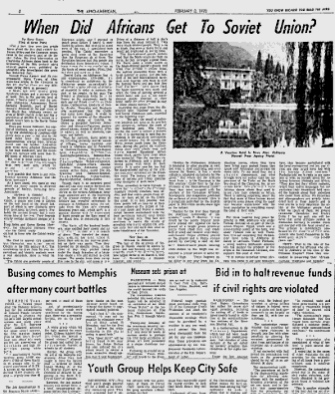 In February 1973, an African-American newspaper published a series of three articles about Africans in the Soviet Union, in particular those in Abkhazia. The article below is the first in the series.

When Did Africans Get To Soviet Union?

(For a long time very few people knew about the ties that existed between Africa and the Caucasus mountains in the southern part of the Soviet Union. The first information on Caucasian Africans dates back to the beginning of the 20th century when several papers were published by scientists who investigated this peculiar historical fact.

Novosti Press Agency sent its correspondent Slava Tynes, of Afro American origin, to the Caucasus to find out whether there are any Africans living there at present.)

A bird’s eye view reveals green mountain ranges and a narrow strip of land. This is the ancient land of Apsni, (“Soul’s Land”) and the present Abkhazian Autonomous Soviet Socialist Republic, part of Soviet Georgia. Situated on the east coast of the Black Sea. Abkhazia covers an area of 33.500 square miles and has a population 500.000. It is known as a health resort both in Soviet Union and abroad.

When one leaves Sukhumi, the capital of Abkhazia, one struck not only by the abundance of sunshine -220 sunny days a year- but also by the large palm trees, the magnolias, rhododendrons, orange trees, Grecian laurel and tea bushes. Australian gum trees have adapted themselves to the local conditions, and the mountains are covered with more than 2,000 kinds of different trees.

But what is most surprising is the fact that in Sukhumi there are people with very dark skin, which is evidently not the result of intensive sunbathing.

Is it possible that there is any relationship between Abkhazia and the black continent?

As I have found this question was asked my many people in different periods of history, including Afro-Americans.

In the Seventh century B.C., the Colchi, a people who lived in Colchis on the east coast of the Black Sea, part of which is now Abkhazia were first mentioned in Greek poetry. Probably the ancient Greeks had a very vague idea of the land. Their legends chiefly contain mythical images of a powerful, militant people ruled by King Aetes and Queen Medea. However, the educated Hellenes were who the Colchi really curious to know who the Colchi really were.

The first to answer this question was Herodotus, who himself visited Colchis in the fifth century B.B. The conclusions he drew from his own observations and historic analysis were a real sensation. Here is what he wrote:

“The Colchi are probably people of Egyptian origin, and I guessed as much even before I heard it mentioned by others. But wishing to make sure of the fact, I questioned both peoples. The Colchi remember a great deal more of the Egyptians than Egyptians believe that this people are descended from Sesostris’s troops. I have drawn some conclusions on the basis of some marks: First they are dark and have curly hair.”

Dmitri Gulia, an Abkhazian linguist and ethnographer, (1874-1960) who is considered an enlightener by the Abkhazian people, painstakingly investigated a large amount of historical material in order to recreate the past of his people. In his book The History of Abkhazia Gulia bases his theory on the statements made by such ancient Greek scholars as Herodotus, Callimachus, Diodoris of Cicely, Stabo, Dionyslus and Eustapus who maintained that the Colchi had come from Egypt. In order to support his version of the Abyssino-Egypitian origin of Colchis, he draws a parallel between Abkhazian and Abyssino-Egyptian geographical names, names of deities, proper names, as well as manners, customs and beliefs.

"In one bizarre twist in the tragedy the three villages of Adziuzhba, Kindigh (Georgian Kindghi) and Tamsh (Georgian Tamishi), which housed the only population of African descent in the entire former USSR, were destroyed by Georgian troops as part of the operation to besiege Tkvarchel. The fate of these unique Afro-Abkhazians has yet to be determined, though at least one survivor has been seen." Abkhazia by John Colarusso (Central Asian Survey (1995), 14(1), 75-96)

Though there is no recorded proof that any ties eve existed between the ancient coast of the Black Sea and Africa as the written Abkhazian language appeared only at the beginning of the present century, the study of folklore has revealed references to Africans in Abkhazian epics. An episode from Nart epic (several thousand years old), which deals in a peculiar manner with the appearance of black people on the East coast of the Black Sea, is interesting in this respect.

“The Narts, all the hundred brothers, once saddled their steeds and as usual started on their way in search of glory. They travelled for many days spending the night where it found them and on the morrow starting on their way again. Thus they travelled for 18 months. Once, at the close of the day, they pitched camp under the shady branches of a large tree, made a fire and stated to cook supper. The smoke from their camp fire rose to the sky, and some people living at a distance of half a day’s ride from the place noticed it. They were black-skinned people. They were so black, that even a brave horseman would get frightened on seeing them.

Analyzing this page from the Abkhazian epic, Vladimir Ankvab, a well-known Abkhazian poet, reasoned in the following way:

“. . The epic, the result of collective creative art, even in its symbols and allegories, reflects the truth of the historical past. Who knows, maybe this story is indeed a historic truth. It is interesting to note that everything in the narrative corresponds to actual history. For 18 months the Narts moved south from the Caucasus. During this period the warriors riding their swift steeds may well have reached Equatorial Africa where black people have lived since time immorial. Then the warriors returned to Abkhazia, and a group of blacks came with them as their guests. It is quite possible too that the black-skinned natives of the African continent remained on the Black Sea coast. The history of the migration of nations and tribes contains many examples of such facts.”

Thus, according to these legends, it seems that in antiquity the Caucasus maintain friendly relations with Africa, and that native people from Africa may have settled on the Black Sea coast. It is also possible that these people left an imprint of their unique culture on the people of Colchis and Apsni and then to a certain extent became assimilated with the local population leaving some traces of the Negroid race. Thos fact still continues to excite the minds of scientists who try to explain the African curly hair and dark skin color in the some inhabitants of the Caucasus.

New Data on Africans in Abkhazia

“The fact of the existence of Negroes in Russia should be known to every one and become an object of scientific study,” the Russian magazine Argus wrote in its March 6, 1913 issue. P. Kovalevsky, a Russian scientist, also wrote: “Besides the Abkhazians, Abkhazia is inhabited by other peoples as well. But what is most surprising and even strange for Russia, is that a whole village is inhabited exclusively by Negroes.” But where did the Africans come from – in the Caucasus in the 20th century? Could they be the descendants of the black-skinned Colchi? Those days were occupied with the problem of the Caucasian Africans. Newspapers and magazines published the evidence of eyewitnesses. Here is a paragraph published by the Kavkaz paper in 1912 which throws more light on the subject.

“Passing for the first time through the Abkhazian community of Adzyubzha,” wrote V. Markov, “I was struck by the purely tropical land-scape around me: Against the background of a bright green primeval jungle there stood huts and sheds built of wood and covered with reeds; curly-headed Negro children played on the ground and a Negro woman passed by carrying a load on her head. Black-skinned people wearing white clothes in the bright sun resembled a typical picture of some African village... There Negroes do not differ in any way from the Abkhazians among whim they have been living since ancient times; they speak only Abkhazian and profess the same faith. To my mind they are a chance phenomenon, and were brought here not earlier than the appearance of the Turks on the Black Sea coast of the Caucasus, for, as everyone knows, they always had many African slaves whom they used to bring from their colonies in Africa. There is nothing surprising about the fact that some places along the coast and became assimilated with the local population in everything except the color of their skin.”

For three hundred long years beginning in 1598, Abkhazia was under Turkish domination as part of the Ottoman Empire. Egypt, which was a slave-trading center at the time, was under Turkish rule as well. Therefore, it is not surprising that Africans may have come to Abkhazia as slaves or servants. Vianor Pachulia, a young modern Abkhazian scientist who has studied the problem of the origin of the Caucasian Africans, also supports this point of view.

“If at various historical times Africans who came to our land remained here, they became assimilated with the local environment and lost any direct ties they might have had with the faraway African continent.” Pachulia told me in reply to my questions of what he thought about the relations between Abkhazia and Africa. “ They also lost their ethnic customs, forgot their native languages, but nevertheless their descendants hold sacred the legends about their ancestors who came from Africa. We historians and ethnographers are greatly interested both in these legends and in true stories to help determine the origin of the Abkhazian people. And when we speak of them, we always remember Herodotus and Dmitri Gulia. I, for my part, can well believe that some Africans settled in Abkhazian territory in ancient times and merged with the local population. This process is convincingly confirmed by the example of those newcomers who found themselves in the Apsni quite recently – some 150-390 years ago.

NEXT: What is the fate of the descendants of the Africans who settled in Abkhazia at the time of the Ottoman Empire? Have they succeeded in preserving their African customs, traditions and legends?