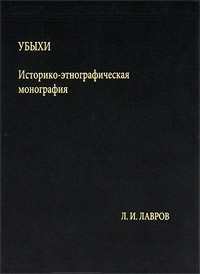 The first monographic work written by a prominent Russian caucasologist L.I. Lavrov and fully prepared for publication in 1937 deals with the wide range of issues on ethnography and history of ubykhs, the people belonging to adyg-abkhazian language group who was living in Western Caucasus area. After the end of Caucasian war in 1864 Ubykhs, who were the last to lay down arms, migrated to Turkey, where they live up to the present. The problems of ubykh’s ethno genesis, their social organization, as well as the formation of state institutions that was going on in the last period of Caucasian war are the issues of particular attention in the present study. The research abounds in factual data and is characterized by clarity of thought, accuracy of author’s stand and the detailed elaboration of problems under consideration. The research first of all deserves consideration of historians, ethnographers-caucasologists and philologists. The materials of the study may be used for university courses on issues of ethnography of Western Caucasus and on Caucasian war.

Leonid Ivanovich Lavrov (1909-1982) was a key figure in the Soviet ethnographic community. His experiences and writings reflect the ideological shifts that took place in the USSR over the course of the twentieth century. Unlike some within his circle, Lavrov successfully navigated the instabilities of the Soviet era and emerged with a strong reputation as a researcher and a colleague. His appreciation for the nuances and complexity of both the milieu in which he lived and the data he encountered help to explain this success. His particular combination of devotion to scholarly excellence, commitment to social progress as the Soviet state defined it, and unwillingness to dismiss the ways of life of the people whose societies were slated for change accorded him respect, both in his day and in later years.

Born into the family of a Russian Orthodox priest on 4 May 1909, Lavrov grew up in the Caucasus, the region between the Black and Caspian Seas in Eurasia that is named for the mountain range that runs across it.  The topography of the region has helped to produce an ethnically diverse population representing several language families and religious traditions. Adygs, one of the groups whom the imperial army had displaced in its mid-nineteenth-century war to bring the Caucasus under Russian control, lived near to Lavrov’s home village, and as a child he came to know some of them.  Lavrov himself descended from Zaporozhian Cossacks, a group of mixed origins whose members had come to function as a border force between the Russian and Ottoman empires until Russia had absorbed their lands in the late eighteenth century.

Lavrov’s career trajectory reveals his attentiveness to the time and his skill in negotiating shifting ideological sands. Subjected to scrutiny for his “social origins” as an applicant to the Kuban’ Pedagogical Institute in his home region, [5] he instead pursued his academic endeavors in the Ethnography Department of the Faculty of Geography at Leningrad State University.  It was in the Caucasus, however, that he began to conduct ethnographic research in 1930, focusing on a community of Adygs living along the coast of the Black Sea.

The full book in PDF can be downloaded by clicking here (3.64 MB)