The pawn of great powers: The East–West competition for Caucasia, by Ronald Grigor Suny

Demographic Manipulation in the Caucasus (with Special Reference to Georgia), by George Hewitt

The ‘Mingrelian Question’: Institutional Resources and the Limits of Soviet Nationality Policy, by Timothy K. Blauvelt 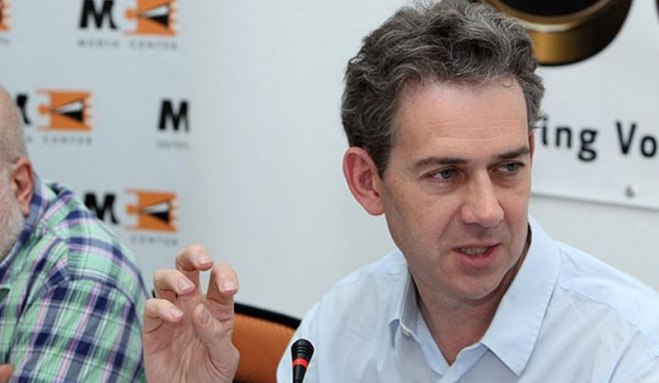 Thomas de Waal is a Senior Associate for the Caucasus at the Carnegie Endowment for International Peace in Washington.

The Caucasus is often depicted as a region of peoples locked in enduring and invariant nationalist enmity. The reality is more complex and therefore more hopeful, says Thomas de Waal.

The south Caucasus is one of those places where people like to say that the “weight of history” lies heavily. Increasingly, I raise a dissenting voice. True, history lies all round you in this region, not least in its regular invocation by modern politicians. To name but one example: after his inauguration as president in January 2004, Mikheil Saakashvili chose to travel to the tomb of the man widely regarded as Georgia’s greatest king, David the Builder, who reigned from 1089-1125.

But the idea that the call of history determines and drives the people of this region into intractable conflict must not be taken at face value. And sometimes history is only as weighty as you allow it to be. The more you look into the Caucasian past, the more it fractures into a mosaic of different narratives, many of them ones of cooperation as well as conflict. If we take a more sceptical - even postmodern - view of the history of this region, we will be doing it a service.

I have been writing about the Caucasus for years but when I started in 2009 to research a short book about the region - which became The Caucasus: An Introduction (Oxford University Press, 2010) - even I was surprised by how some of the historical facts I learned challenged many of today’s dominant political narratives. Three examples make the point.

First, in Russia’s wars of 1820s against the Ottomans, Armenians and Azerbaijanis fought side by side in the Tsarist army. At that historical juncture, the Shi’a-Sunni divide overrode any notions of Turkic brotherhood. Alexander Pushkin himself witnessed the “Karabakh regiment” composed of Azeri cavalry in action outside Kars, and wrote an admiring poem dedicated to one of its officers, Farhad-Bek. That should caution against making any instant assumption about an eternal Azerbaijani-Turkish alliance, which often fuel political attitudes over the Nagorny Karabakh conflict (and which the Armenian-Turkish normalisation process, albeit thus far unsuccessful, has also somewhat shaken).

Second, the way that the Abkhaz-Georgian-Russian interrelationship has reshuffled since the 1850s challenges conventional wisdom. In the decades after Georgia fell was annexed by Russia in 1801, and increasingly throughout the 19th century, the Russian authorities ensured that Georgian aristocrats became loyal servants of the Tsar by allowing them to ascend the imperial career-ladder while keeping their noble status. At the same time, the Russians regarded the Abkhaz as wild pro-Turkish tribesmen and implacable enemies.

In 1852 the Russian general Grigory Filipson complained that his soldiers could not step outside their Black Sea fortress without fear of being killed by Abkhaz malcontents: “In a word, we occupy Abkhazia but we do not rule it.” In the last quarter of the 19th century the Russians’ deportation of the Abkhaz from their homeland facilitated the immigration of Georgians into Abkhazia, redrawing the demographic map and seeding the ground for conflict in the 20th century. This history raises question marks about the durability of the Abkhaz-Russian relationship, and indeed of Russian-Georgian hostility.

A third surprise to me was to learn how Georgia’s first declaration of independence in the 20th century was, in geopolitical orientation, 180 degrees different from the second. In May 1918, in the wake of the Bolshevik revolution in Russia and when Georgia was threatened by an imminent Turkish invasion, the head of the Tbilisi government, Noe Zhordania, reluctantly declared Georgia independent. Zhordania, whose Menshevik (social-democratic) party traced its roots to the split with the Bolsheviks in 1903-04, voiced his ambivalence over breaking the bond with Russia: “Our ancestors decided to turn away from the east and turn to the west. But the road to the west lay through Russia and consequently to go towards the west meant union with Russia.”

Zhordania’s independent republic lasted almost three years until Georgia’s incorporation into the Soviet Union in 1921. Amid the USSR’s slow disintegration seven decades on, Georgia embarked on a second and more successful attempt at independence. This time, Russia was called the colonialist enemy while Turkey became a newly discovered friendly neighbour. Again, this suggests that if Georgia’s striving for self-sufficiency can be regarded as a historical constant the nature of its alliances is not.

“Why should we care?”, you may ask. “Aren’t these historical examples merely interesting but irrelevant anecdotes when set against the immediate tensions and problems of the region?” I don’t believe so, for two reasons.

First, these historical shifts suggest that there is nothing culturally determined about the smouldering conflicts of the Caucasus. It shows that they have nothing to do with “ethnic incompatibility” or “ancient hatreds”, but rather arise - and can fade - according to changes of interest or calculation; and it usefully refocuses our attention on the Soviet period and the two decades immediately preceding it.

For the roots of the Caucasian conflicts lie here (or so I believe): not in the distant past but in the way the Soviet system stored up problems by smothering the political grievances amongst its constituent peoples with bribes and the threat of force, rather than genuinely arbitrating between them (which might have led to a culture of accommodation and flexibility). When the policeman from Moscow abandoned his post, everyone was left in a chronic sense of insecurity - and some saw the opportunity to grasp hold of deadly historical narratives that Soviet Caucasian intellectuals had been nurturing for decades. Bad history became the ammunition for feuding regional elites.

But not everywhere - for some potential areas of tension proved the exception, showing that history can also be a resource that resists crude instrumentalisation. The Soviet crack-up reignited long-frozen conflicts in Abkhazia, South Ossetia and Nagorny Karabakh, but another conflict with roots in the pre-Soviet era - the one in Adzharia, southwestern Georgia, once part of the Ottoman empire and whose inhabitants are largely Muslim - did not revive. A major reason for this, in my view, is that the absence of Turkey and Islam as identity-markers in any Soviet-era regional quarrels meant that these couldn’t now act as catalysts for conflict between Adzharians and other Georgians.

This openness of history to surprising directions is reflected too in the Armenian-Azerbaijani conflict over the enclave of Nagorny Karabakh. This is no primordial or civilisational clash, but better described as a clash between two emerging nation-states each of which saw this totemic territory as a cause to be mobilised and a crux of their new-old identity.

There is nothing ethnically incompatible about Armenians and Azeris. They had decent rates of intermarriage in Soviet times, and today trade and interact freely on the territory of Georgia and Russia. That makes me conclude that the challenge in the Karabakh dispute is not about reconciling ordinary people but about reconciling political narratives. It comes down to both security and symbolism: if a settlement can be designed which fulfils the security needs of each side and in which their proud attachment to Karabakh is honoured, most people should have no problem in supporting it - and everyone will be a long way towards a solution.

If the first historical lesson is that the region’s conflicts are not predestined, the second is that the Caucasus is not as bloody as it looks. The locals fight when they have to, but also have sophisticated ways of not fighting. I am not of course saying that the Caucasus is a non-violent, vegetarian kind of place. Denmark it is not. There is a strong culture of violence and weapons here, but I would argue that this is often an expressive substitute for real killing.

The conflicts of the south Caucasus in the 1990s, great tragedies as they were, exemplify the point. Their most striking feature was the vast number of displaced people - a total of almost 1.5 million in three years - rather than numbers killed (the body-count was far smaller than in the contemporaneous war in Bosnia, for example). This was a grave regional humanitarian catastrophe. But it also points to the fact that in both Karabakh and Abkhazia, advancing soldiers generally preferred to terrify civilians into flight rather than to kill them. The exceptions, such as the massacre at Khojali in February 1992 and some of the atrocities in Abkhazia, were as a rule committed by more ruthless incomers not locals.

Again, as well as the people who did not die, there were the conflicts that did not happen. To the Adzharia example could be added the mixed Armenian-Georgian region of Javakheti (which saw a brief war in 1918) and the case of the Lezghins who live on either side of the Dagestan-Azerbaijan border, but who have chosen not to agitate for reunification. Likewise, Georgians and Ossetians on the ground in South Ossetia twice (after the fighting of 1991-92 and 2004) managed to carry on living and trading together despite political conflict, before their interaction was tragically cut short by the war of August 2008.

All this underlines a deep history of pragmatism in the south Caucasus which is there, just below the surface, if you care to look for it.

Caucasian political elites who find that exploiting regional tensions is a useful means of consolidating their power have no interest in telling these stories of unglamorous pragmatic coexistence, but foreign visitors and politicians are under no such obligation. They can narrate these alternative stories when they travel to the region and spread the message that history can be light cloak as well as heavy armour.