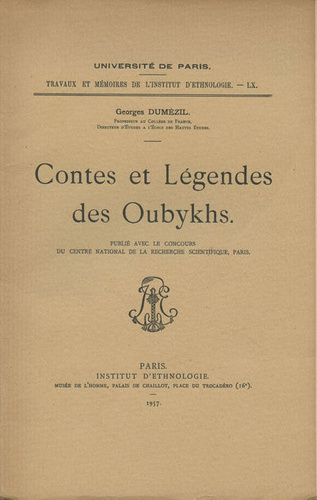 Georges Dumézil (1898 – 1986, Paris) was a French comparative philologist best known for his analysis of sovereignty and power in Proto-Indo-European religion and society. He is considered one of the major contributors to mythography, in particular for his formulation of the trifunctional hypothesis of social class in ancient societies.

Feeling that he had little place in the French academy, Dumézil moved to Turkey in 1925 to teach at the University of Istanbul, created as part of Kemal Atatürk's attempt to create a modern, secular nation. He learned Turkish and developed an interest in the Ubykh language and travelled widely in Russia, Turkey and the Caucasus. As a result, he became one of the premier experts of Caucasian languages to work in French. He compared the Etruscan language with the Caucasian languages.

The full book in PDF can be downloaded by clicking here (8.12 MB)