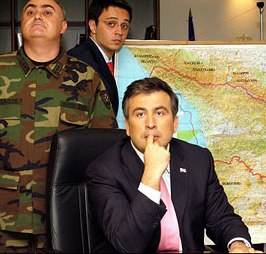 It looks like the Georgian so called “Strategy on occupied territories”, that claims the de-isolation of Abkhazia and South Ossetia as it’s main purpose, was in fact designed for exactly the opposite purposes. The political frames of the Strategy suggest that Georgia’s idea of de-isolation in reality means “de-occupation” of Abkhazia. Needless to say, that this approach is totally unacceptable for Abkhazia, since those who live in Abkhazia do not consider themselves “occupied”, but rather feel protected against another possible Georgia’s reckless military adventure.

It is very likely that the Strategy was invented to intercept EU initiatives (European “engagement without recognition” approach). The aim is either to try to channel them through Georgia, or at least to discredit them by linking international engagement to the idea of “de-occupation” and Georgia’s “territorial integrity”. Knowing that the international community is not prepared to do anything in Abkhazia without Georgia’s consent, and realizing that Abkhazia will be very unlikely to accept international aid channeled through Georgia, the Georgian Government is in fact trying to block any direct international engagement in Abkhazia.

The Georgian approach reflects certain illusions that exist in the Georgian society. One of such illusions is the hope that if Abkhazia is left alone to deal with Russia, Abkhazians would eventually realize the risks of their asymmetric relations with Moscow and turn back to Georgia. On the other hand, if Georgia really counts on Abkhazia’s acceptance of the “Strategy”,   then Georgia’s interests are ensured in the document, that pre-conditions any aid to Abkhazia by providing strong Georgian control. So the whole business is about either blocking Abkhazia’s external contacts, or controlling them.

It is highly unlikely that Abkhazia will respond positively to Georgia’s Strategy and the subsequent Action Plan. It is also unlikely, that Abkhazia will turn to Georgia in the face of growing Russia’s presence. Within Abkhazia unification with Georgia is not regarded as an alternative at all.  The question is, whether the EU will be able to put substance in their own strategy, and make it absolutely clear (to Georgia in the first place), that EU’s engagement is not designed to help the Georgians to get back what they have lost through the war.