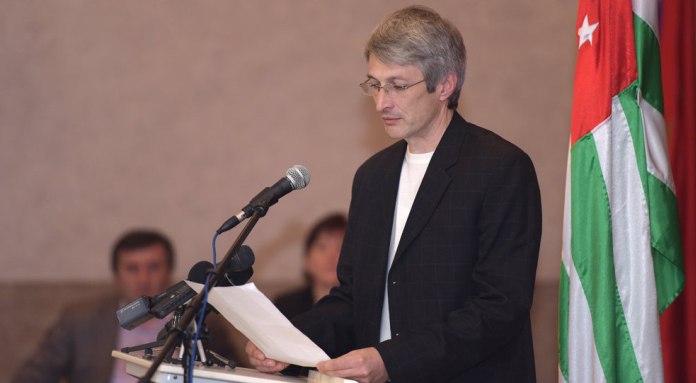 "I am sincerely grateful to the various social forces and, in particular, the organization "ARUAA" for true citizenship and responsible approach to the solution of important public issues", - said in his speech, the President Raul Khadjimba. The President stressed the need to consolidate society. In his view, "the basis of this consolidation may not be someone's narrow corporate interests, and social tasks, the solution of which depends the future of our citizens, regardless of their political views". Khadjimba told about priorities, noting the difficult economic situation in the country. The primary objectives, in his opinion, are law enforcement, strengthening of discipline in the state apparatus and uncompromising fight against corruption.

"Without the implementation of these initial conditions can be no question about the reforms and successful development of our country", - said the President. He noted that the sole authority to become law, and the authorities will carry out consistent work to the community came to realize the need for compliance. The President did not rule out that it all depends on the political will of the government and its example. "We have to perform a great deal of work in almost all areas of the state. Considerable effort will be required to correct the situation and just let it the right direction", - concluded the head of state.

In turn, the chairman of the "ARUAA" Vitaliy Gabniya noted that veterans always stand side by side with those who struggle for order in the country. He thanked everyone for their work and asked to vote for a new chairman "ARUAA" Iliya Guniya.

The Secretary of the veteran organization Rismag Ajinjal gave a brief analysis of all the activities that were carried out by the organization for the past year. "We have an understanding that the problems of veterans, we encountered could have been resolved earlier and without us, if the majority of emerging issues would function full state programs", - he said. Despite the large number of activities undertaken, Rismag Ajinjal believes that the organization faces many unsolved problems. "We are confident that the new government will listen to our recommendations and that together we can break the frozen point in the process of social protection of disabled of the War of Abkhazia. We are confident in their abilities and know that we can make the life of the war veterans better", - said the secretary of the "ARUAA".

At the Congress by a vote accepted the resignation of Vitaliy Gabniya, in connection with his election as theVice-President of Abkhazia. Also elected new members of the Supreme Council, which included 48 people.

Further, Congress unanimously elected a new chairman of the "ARUAA" - a veteran of the War of Abkhazia in 1992-1993, Chevalier of the Order of Leon Iliya Guniya, who said, in particular: "One of the most important activities in our organization is the issue of increasing the priority of the warrior - defender of the fatherland, as well as assistance in solving social problems of the disabled and the families of the victims". Iliya Guniya assured that "Aruaa" make every effort to unite veterans, socio-political organizations and unions volunteers of the North Caucasus in the joint solving the country's problems.

Next Republican public organization of veterans' Aruaa "signed a cooperation agreement with the Union of Cossacks and Cossacks war veterans of Abkhazia, with the NGO" International Abkhaz-Adyghe MAASM Youth Union "NGO" Abaza national cultural center "Abazara" and with the Association of Women with Disabilities, participating in hostilities of the War of Abkhazia in 1992-1993.

Also adopted a resolution. The document says: "Abkhazia costs a lot of large-scale tasks that need to be addressed as soon as possible to overcome the economic and political crisis, generated by the poor management of the previous government. We note that under the current president, Raul Khajimba, the country can rely on the long-overdue reforms, which will save our state and provide a decent life for citizens!"