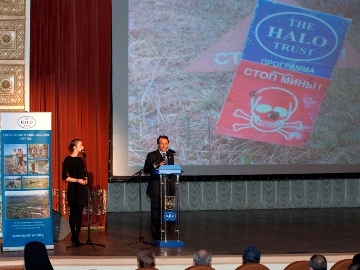 According to a British-registered NGO, HALO Trust, Abkhazia is now completely cleared of the landmines which were placed during former conflict.

Below is an press release issued by the HALO Trust:

Abkhazia announces that all known mined areas have been cleared, after 14 years of sustained humanitarian demining operations by the HALO Trust.

Guy Willoughby, Director of the HALO Trust, speaking in Abkhazia said “It is great news that after 14 years we can announce the complete clearance of all 336 known mined areas in Abkhazia, in line with Article 5 of the Ottawa Mine Ban Treaty. It is a testament to the hard work of our local deminers, and to the financial support of our international donors,  that total mine clearance can be achieved after a full scale war where mines had been widely laid.

The HALO Trust will support the Abkhazia Mine Action Office to assist with any emergency call-out facilities for the disposal of single items of unexploded ordnance (UXO) that may be found by farmers. The office will also maintain the database and detailed maps of all the districts, to help advise agricultural and tourism developers who may seek information in the years ahead.”

From the end of the war in 1993, there were 654 civilian casualties from landmines, and countless livestock killed, hugely impacting rural livelihoods in Abkhazia. By early 2011 the civilian casualty rate was down to just one individual in the previous year.

336 Minefields have been cleared, none remain

48,998   items of unexploded ordnance have been destroyed

530 local deminers were deployed at the height of clearance operations, working in two shifts to increase clearance rates during the longer summer days.

Clearance was funded by the aid departments of the Governments of the USA, UK, Netherlands, Germany, with support from the EC, from the Japanese through the TV company Tokyo Broadcasting Services (TBS) and the Association of Aid and Relief (AAR), and the Diana Princess of Wales Memorial Fund.  The total cost over 14 years was US$ 22m   / UK £14m.

The HALO Trust is the world’s largest humanitarian demining charity.