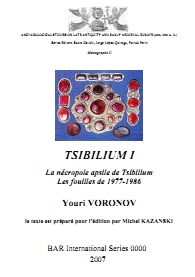 The Apsilians are clearly the forefathers of today's Abkhazians, who style themselves Apswa (Apswaa in the plural). Tsibilium figures in the works of Agathias, where we find another tribe, the Missimians, living in the region. Agathias, writing in Greek in the 6th century AD, clearly states that the Apsilians and Missimians were related in terms of both language and culture. Voronov argued that, since the leading family in the area was that of the Marshans, this name probably gave rise to the term 'Missimian'.

The full book in PDF can be downloaded by clicking here (71.8 MB)

The assassination of Yuri Voronov at his home in Sukhum, capital of the tiny Transcaucasian Republic of Abkhazia, robbed the Abkhazians of not only their Deputy Prime Minister but also a staunch champion of their struggle to establish their right to self-determination.

Born in 1941, Voronov specialised in the archaeology and ancient history of the western Caucasus. He published widely, his books including In the World of Abkhazia's Architectural Monuments (1978) and Dioskuriada- Sebastopolis-Tskhum (1980) - three older, foreign designations for Sukhum (Aqwa to the Abkhazians). His academic career was spent at Abkhazia's Research Institute (burnt to the ground with its irreplaceable archive by the Georgians in late 1992); here he distinguished himself as director of the excavations in the mountain settlement of his native Tsebelda, where he was granted honorary citizenship.

Voronov was ethnically Russian with a Georgian wife; his objectivity soon saw him experiencing the same obstacles Abkhazian scholars faced when presenting arguments that questioned the doctrines of Abkhazian history and identity propounded by Georgian colleagues - from 1931 to 1991 Abkhazia was a mere autonomous republic within the Republic of Georgia, and the Georgian Academy controlled all archaeological research within its Soviet bailiwick. Voronov wrote in 1992: Read more...