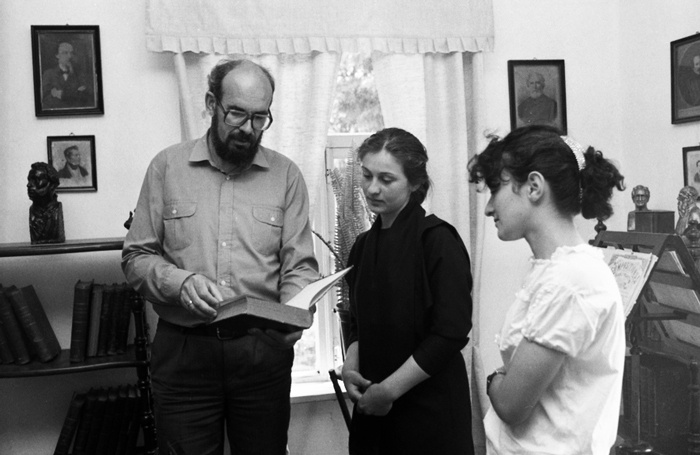 Ekho Kavkaza -- The 8th May marks 70 years since the birth of the outstanding scholar and social-political figure of Abkhazia Yuri Nikolaevich Voronov. Students of the Faculty of History at the Abkhazian State University were the first to commemorate Yuri Voronov in anticipation of this date.

The academic legacy of the scholar Yuri Voronov still stands to be evaluated before future generations of Abkhazian historians. To be evaluated is his analytical and insightful mind. Such was the leitmotif of the conference, in opening which the Rector of the University, Academician Aleko Gvaramia, stressed that amongst today's achievements of our republic is the weighty contribution Yuri Nikolaevich Voronov, his painstaking labour, which was sometimes dangerous for his life. He was from that cohort which was headed by the first president of Abkhazia, Vladislav Ardzinba.

As Aleko Gvaramia recalls, on whatever Voronov, the first professor of the Abkhazian State University, worked, he always and without exception focused on the interests of ordinary citizens:

"From morning until late at night he would meet people and discuss how to help individual families, individuals, and scholars."

It was Yuri Voronov in the Soviet period who first dared to speak about the autochthonous status of the Abkhazian ethnos on their native soil, which drew a flurry of attacks and criticism from Georgian scholars. As the Pro-rector of the Abkhazian State University, Oleg Shamba, recounts, Voronov never feared to speak the truth full in the face, even if this brought him the threat of mortal danger:

"Now there are many who bare their breasts, excellent speakers who sally forth and are not afraid to speak on any topic. But when I headed the Russian Service of the Republic of Abkhazia’s Radio, they were afraid to come to the microphone, including our intellectuals. Yuri Voronov came to me on a regular basis and very often appeared on air.”

The compass of Yuri Voronov’s scholarly works was not limited to the history of ancient and mediaeval Abkhazia. He was a world-renowned archaeologist and at the same time could professionally polemicise on any problems concerning modern-day Abkhazia. Even before the Abkhazian people’s Patriotic War and in the terrible everyday fighting, the word of historian Voronov was often for the enemies of the Republic more dangerous than guns and machine-guns. As Saria Tania, second year student of the Faculty of History at the Abkhazian State University, noted in her report, though Russian by birth, in spirit Voronov was a real Abkhazian:

"I see in him a patriot. In the darkest days of the war,  in spite of everything, he managed in a short time to write ‘The White Book Abkhazia’ and brought to the public information about the brutal acts of the occupying regime, established on the territory of Abkhazia by the Georgian authorities. Also, Yuri Nikolaevich Voronov always defended the interests of Abkhazia on its ideological front. As I have said in my paper, he liked it when they called him an Apsilian, and believed that he was an Abkhaz in spirit. He devoted his entire life to Abkhazia."

In the course of the conference devoted to the 70th anniversary of Yuri Voronov, fourteen papers were delivered, and the Abkhazian State University published the third volume of his scholarly works, as well as the monograph "The Architecture of Abkhazia" in English.