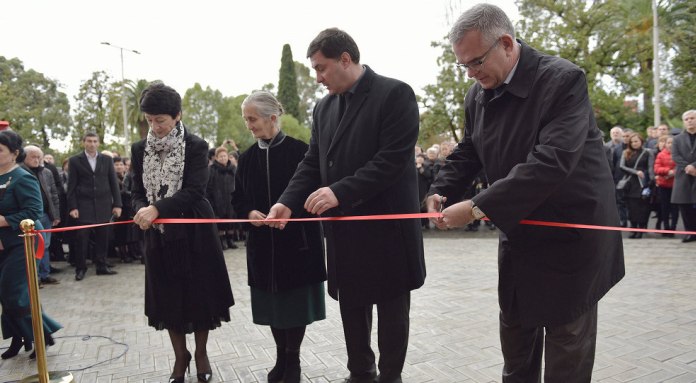 SUKHUM -- The National Museum of Military Glory on behalf of V. Ardzinba is opened in Sukhum on December 14th. Its opening was timed to the Day of Memory and Mourning for the victims of Lata tragedy. As the First Deputy Prime Minister Shamil Adzynba noted there were killed innocent women and children in the helicopter, so the pain brought on this day 22 years ago is the sharpest.

The museum was officially opened after the traditional red ribbon cutting ceremony by the First Deputy Prime Minister Shamil Adzynba, Ambassador of Russia to Abkhazia Semen Grigoriev, the wife of the first President of Abkhazia Svetlana Djergeniya and Tamara Avidzba, a mother of four sons who died in the war of the people of Abkhazia.

The museum was renovated at the expense of Russian financial aid and consists of nine rooms, exhibition that includes all key stages of the history of the War of Abkhazia.

The museum director, Hero of Abkhazia Mzia Beiya told Apsnypress that all finishing works in the museum are completed, but the exposure has not yet been presented. This will take the museum staff and volunteers will help them, students of historical faculty of the Abkhazian State University. The employees of the museum have a lot of work: to collect the storage material. Regular visits to the museum will be operational after filling all the rooms, which is estimated to take about 5 years. According to the director, the museum has an electronic database of the participants of the War of Abkhazia, the dead and missing, about the volunteers, as well as returnees participating in hostilities.

"We want to create a museum that will help in the ideological education of future generations," - said Mzia Beiya.

The opening of the museum was attended by the President Raul Khadjimba, the vice-president Vitaliy Gabniya, First Deputy Prime Minister Shamil Adzynba, MPs, Russian Ambassador to Abkhazia Semen Grigoriev and others.