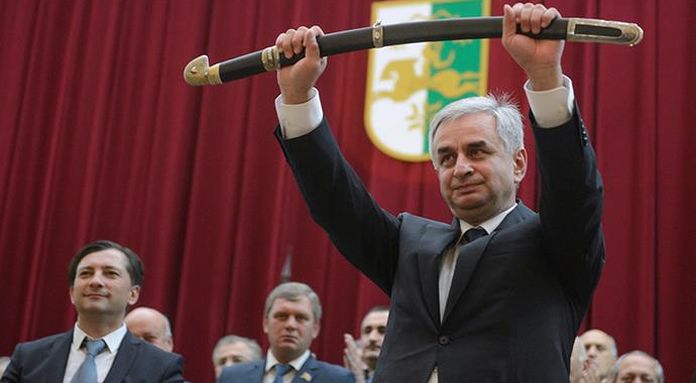 Raul Khadjimba holds a sword as he takes his oath of office duting the inauguration ceremony in Sukhum on September 25, 2014.

RFE/RL Caucasus Report | In July 2013, nine opposition parties and groups in Georgia's breakaway republic of Abkhazia aligned in a Coordinating Council that succeeded the following year in ousting de facto President Aleksandr Ankvab in what was portrayed as a bloodless coup. Earlier this month, Abkhazia's main opposition parties similarly established a Union of Political Parties and Public Organizations with the stated aim of using all available legal means to force the resignation of Raul Khajimba, who was elected Ankvab's successor in an early presidential poll in August 2014.

In one key respect, however, the political landscape has changed over the past five years: The parliament elected in March 2017 has begun to play a more active role, challenging perceived failings on the part of the executive branch, rather than simply endorsing legislation drafted by the presidential administration.

For most of the past three years, Abkhaz domestic politics has been dominated by the mutual antagonism between Khajimba and the opposition. Initially, the most active and outspoken opposition force was the Amtsakhara (Keep the Home Fires Burning) union of veterans of the 1992-93 war that culminated in the loss of Georgia's control over the region. In early 2015, Amtsakhara began accusing Khajimba of failing to deliver on his election campaign pledges to expedite economic growth, raise living standards, and seek reconciliation with the Ankvab camp. In October of that year, it convened an emergency congress to demand his resignation, but without success.

In December 2016, the Bloc of Opposition Forces (BOS) established the previous year by Amtsakhara; the APRA Fund for Socio-Economic and Political Research headed by Aslan Bzhania, whom Khajimba had defeated in the August 2014 early presidential ballot by just 559 votes; and two other small political groups launched a new push to force Khajimba to step down. A violent confrontation in the region's capital, Sukhumi, between supporters and critics of the president was averted at the last minute by talks between the two camps that led to the signing of an agreement on social and political stability under which the BOS would stop demanding Khajimba's resignation.

In return, they received the right to nominate a first deputy prime minister, several deputy ministers, the prosecutor-general, four members of the new Central Election Commission, and two members of the newly established Constitutional Court. In addition, the parliament was to set about draftingconstitutional amendments that would redistribute power between the legislature and the executive, including the president.

The truce between the two camps lasted barely six months, however, primarily because Khajimba failed to comply with the provisions of the agreement. Following yet another emergency congress in late June 2017, Amtsakhara and the BOS issued separate statements announcing their withdrawal from the agreement on the grounds that the Abkhaz leadership had not fulfilled its obligations.

Amtsakhara and the BOS did not, however, immediately renew their efforts to force Khajimba to step down. On the contrary, the focus of opposition discourse began to shift from relentless criticism of Khajimba and the government to a more nuanced debate that prioritized the need for systemic reform over criticism of the region's leadership.

That comparative lull came to an abrupt end in late December when it transpired that Khajimba had pardoned and handed over to the Georgian authorities Georgy Lukava, an ethnic Georgian from Abkhazia serving a 20-year prison term for the kidnapping and murder of Abkhaz officials. Amtsakhara and two smaller opposition groups, Ainar and Kyarazaa, accused Khajimba of betraying the memory of those who fought and died in the 1992-93 war that culminated in Abkhazia's de facto separation from Georgia.

Some members of the Abkhaz leadership expressed reservations, too. Even Khajimba's vice president, Vitaly Gabnia, was quoted by the news portal Caucasian Knot as saying that if the Abkhaz side “handed over a man sentenced for such serious crimes and we were not aware of it, then it has to be said that a mistake was made, and those responsible must be [identified]."

More than 1,000 people, including some Khajimba supporters, congregated in Sukhumi on January 3 to protest Lukava's release. Meeting in emergency session the same day, the parliament set up a commission headed by former Interior Minister Raul Lolua to determine whether Khajimba had, indeed, violated the law and the constitution by single-handedly deciding to release Lukava without securing the approval of the pardons commission. After Khajimba personally argued his case to lawmakers, however, the parliament commission decided to refer the issue to the Constitutional Court -- even though, as a result of Khajimba's rejection of opposition nominees, that body is still not at full strength.

That initiative reflects the albeit limited power of the new parliament to serve as a curb on and counterbalance to perceived infringements or inefficiency on the part of the president and government. Of the 35 lawmakers, some 20 are Khajimba supporters, even though only three are members of his Forum of National Unity of Abkhazia. In fact, few parliamentarians represent a specific political party. Neither Amtsakhara nor the former ruling United Abkhazia won representation, and only one of seven Ainar candidates was elected. 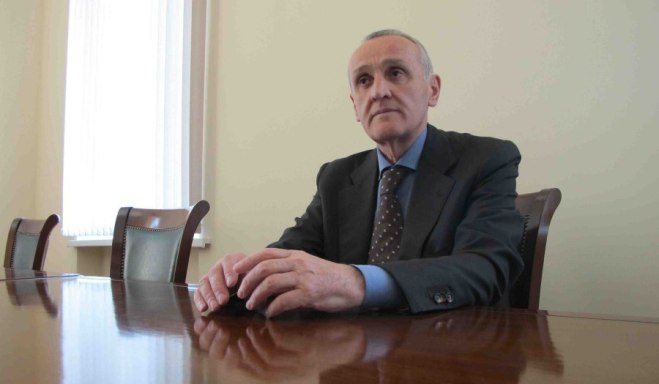 Instead, the remaining 15 lawmakers are loosely divided into three groups. Former President Ankvab and former CEC Chairman Batal Tabagua each head a group of five or six deputies, while the others are affiliated with Ainar or another opposition grouping, the news portal Caucasian Knot reported on March 28.

That model of informal loyalties is, however, proving increasingly tenuous and fluid. In late December, two nominally pro-Khajimba lawmakers, Ilya Gunia and Dmitry Ardzinba, called for a vote of no confidence in Prime Minister Beslan Bartsits on the grounds that the 2018 draft budget submitted by the government to parliament prioritized financing the government bureaucracy over subsidizing agriculture or a comprehensive program of economic development. Twelve pro-government parliamentarians walked out of the parliament chamber before the actual no-confidence vote, which failed by just two votes. (Of the 21 remaining deputies, 16 voted in favor, two against, one abstained, and two votes were ruled invalid.)

Predictably, Khajimba reacted to the protests over Lukava's release by convening a series of public meetings in a bid to convince the population at large that he had acted within the framework of the law in pardoning Lukava, and that the opposition had organized those protests in order to score political points. Former Interior Minister Lolua categorically denies this. In a lengthy interview he gave to AbkhazInform, he said that “there was no political undercurrent to [the protesters'] actions; citizens were simply demanding that the authorities make public the motives for and details of the release of a terrorist and murderer."

Khajimba subsequently dismissed the call by the new Union of Political Parties and Public Organizations for his resignation as “a destructive position, a call for chaos."

In an apparent effort to underscore the key difference between the union's push for Khajimba's resignation and the storming in May 2014 of the presidential administration that triggered Ankvab's ouster, APRA Fund chairman Bzhania stressed at the union's first press conference on January 23 that the opposition was committed to acting within the framework of the law to create a situation in which Khajimba would voluntarily step down.

But even allowing for Khajimba's clear determination to remain in his post, the new union's chances of success are slight, for at least two reasons. First, it may prove difficult to reach a consensus on tactics and time frame, given the diverging priorities of its various members. Amtsakhara and Bzhania may argue that it is imperative to force Khajimba's resignation as soon as possible, given what Bzhania describes as the catastrophic state of the Abkhaz economy. Abkhazia Is Our Home leader Lolua, by contrast, insists that new legislation on both presidential and parliamentary elections must be passed before an early presidential election can be held.

Secondly, Ankvab and Tabagua have not acceded to the union and were conspicuous by their absence from its first press conference. Addressing Amtsakhara's June 2017 congress, Ankvab stressed the need to preserve political stability until the presidential election due in August 2019, rather than expose a population wearied by repeated political crises to new upheavals that could, in his words, undermine the foundations of the state. Instead, he continued, “responsible people, meaning us, should concentrate on preparing for the upcoming presidential election in order to offer society an alternative, to convince citizens that we are right." Ankvab himself is not eligible to participate in that ballot, having reached the maximum age of 65 in December.

But even if Ankvab and Tabagua do not openly align with the new union, they could still play a key role in parliament by systematically thwarting any legal initiative for which Khajimba's supporters require a constitutional majority, with the possible exception of the long-awaited draft constitutional amendments on the distribution of powers between the legislative and executive branches.

The views expressed in this article do not necessarily reflect those of AbkhazWorld.