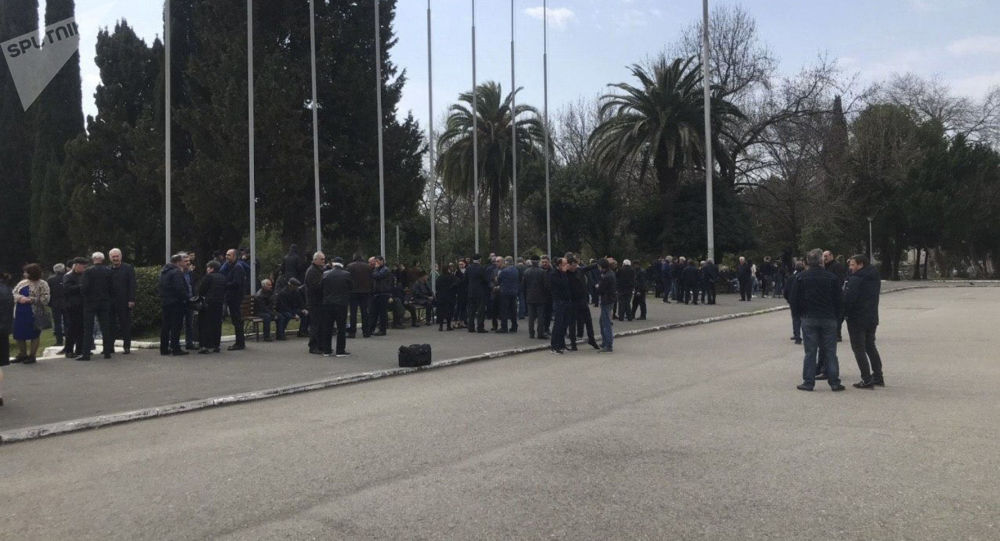 JAM News, SUKHUM -- Six activists continue their hunger strike, around 400 people have come to support them, and they promise not to leave until the law is passed in parliament.

Residents of Abkhazia gathered for a spontaneous rally on March 11 in support of six activists who went on a hunger strike, demanding that the government and parliament pass an anti-corruption law.

Three activists started the hunger strike on March 2, and three more joined them on March 8.

An action group headed by former presidential candidate Astamur Kakaliya has been working tirelessly since 2018 to force parliament to enact a law holding officials criminally responsible for embezzlement, and also to ratify article 20 of the UN Anti-Corruption Convention. On February 6, parliament passed a law entitled “On the declaration of income, expenses, property, and property obligations by public servants and deputies.” However, activists called it “a work of fiction” and demanded revisions.

Protesters have set up tents in Freedom Square in Sukhum, equipped with folding beds and five-liter water tanks. The names of those participating in the hunger strike are Ivan Achba, Dzhansuh Adleiba, Alina Achba, Asida Kortua, Marina Agrba and Bota Azhiba.

Agrba and Azhiba have been periodically hospitalised in the city hospital, which is located across from the square.

About 400 people are participating in the support rally. They were informed that the parliament members promised to pass the bill. But since this is not the first time such a promise has been made, the protesters decided not to disperse until the parliament passed the law.

“They promise that they will hold a parliamentary session on March 12, and the law on misappropriation of public funds will be adopted with our amendments,” said leader of the activist group Astamur Kakaliya, who is not participating in the hunger strike.

Activist and hunger strike participant Asida Kortua called on everyone to remain calm and wait for the members of parliament to keep their promise—or to break it.