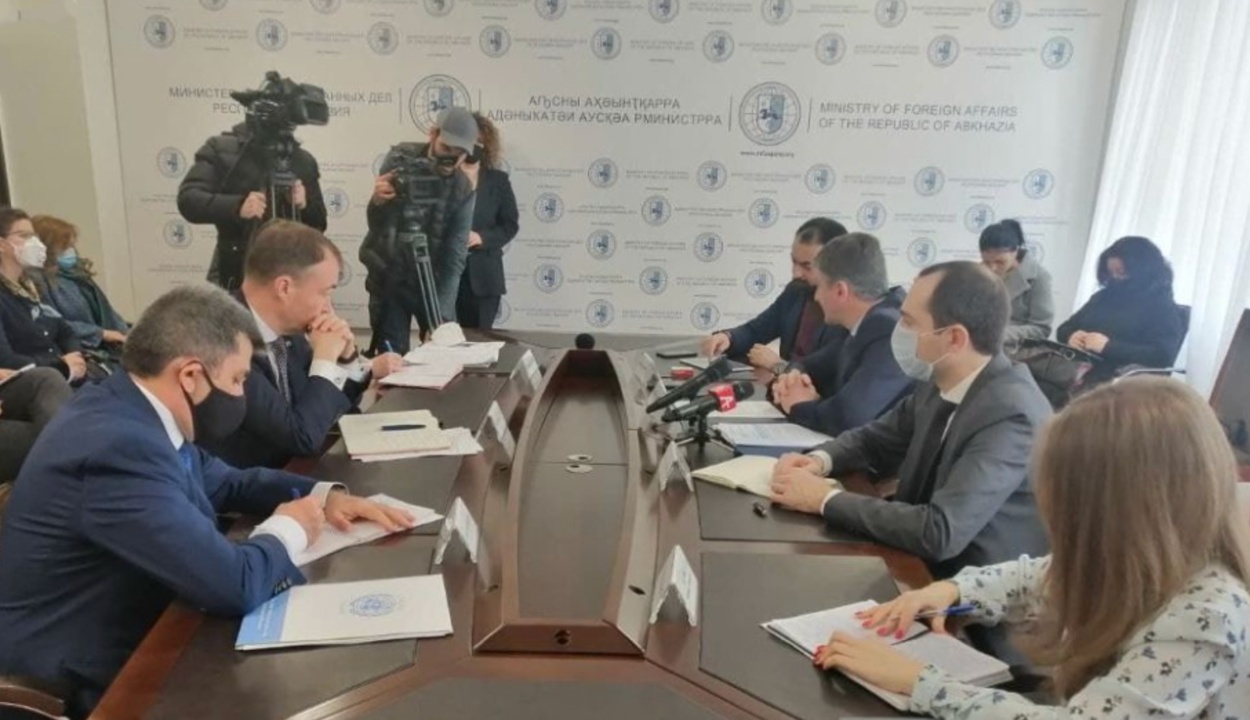 SUKHUM / AQW'A -- The next 52nd round in the framework of the Geneva Talks on security and stability in the Caucasus will be held on 24 and 25 March.

In advance of the next round of Geneva talks, which are scheduled for 24 and 25 March, a meeting between the Talks’ co-chairs was held at the Ministry of Foreign Affairs of Abkhazia.

Opening the meeting, Deputy Foreign Minister Irakli Tuzhba proposed to discuss the agenda which will be the subject of the Talks in Geneva, namely issues related to security and humanitarian issues.

"It should be noted that over the past period the situation in the Gal District has remained calm and stable, and we have not recorded any serious incidents over recent times. Of course, attempts to cross the border illegally have continued, but they were all suppressed, and the problems were resolved in a legal manner," said Abkhazia’s Deputy Foreign Minister.

He also noted the positive dynamics in the fight against coronavirus-infection, specifically that the peak of the incidence has passed.

"The issue of agreeing and signing a document on the non-use of force directly affects the issues of ensuring the safe and peaceful development of our region. The recent events in Nagorno-Karabakh have demonstrated that our region remains explosive and events can be unpredictable," the Deputy Foreign Minister of Abkhazia stated.

Toivo Klaar, the representative of the European Union for the South Caucasus, noted that the pandemic, which affected the Geneva Talks, is decreasing, and this will allow a return to the regular and customary functioning of the discussions.

"The European Union is pleased that we have managed to finance a number of UN projects aimed at combating the coronavirus. It is important for us to discuss the entire range of issues that are on the agenda, including security issues," Klaar said.

After that, the OSCE Special Representative Annika Soder, for whom the visit to Sukhum was her first, said that she was glad to be in the capital of the republic to hold a meeting.

“It is very important for us to make the most of the opportunities presented by the Geneva Discussions in order to find ways for stability and solutions that could improve the lives of people affected by the hostilities,” she said.

The Geneva Discussions on security and stability in the Transcaucasus have been held since October 2008 on the basis of agreements reached after the events of August 2008 in South Ossetia. At the moment, this is the only platform for dialogue between representatives of Abkhazia, South Ossetia and Georgia. Representatives of Russia, the United States, as well as the UN, OSCE and the EU participate in the discussions as mediators.