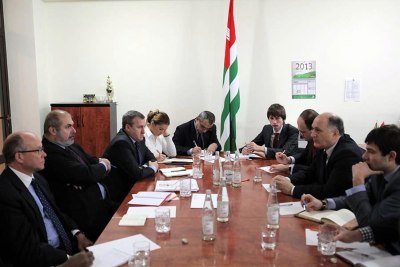 SUKHUM -- The co-chairmen of the Geneva Discussions Ph. Lefort (EU), A. Turunen (UN) and A. Deshchitsa (OSCE) and other participants in the meeting discussed with Republic of Abkhazia Foreign Minister V.A. Chirikba issues connected with the upcoming round of talks in Geneva. “In light of the fact that on the previous occasion we were faced with an unanticipated situation in Geneva, it is essential we conduct a series of consultations in order to bring that round of talks to a successful conclusion. The Geneva process is of great significance to Abkhazia, we have been participating in it for several years, and we intend to continue the dialogue with our colleagues. An effort should be made to exploit the effectiveness of this forum to the maximum degree possible in order to turn the South Caucasus into a region of peace and stability. It is clear that after a long period of talks there comes a moment when it is necessary to review specific positions and undertake revisions in order to make the work more productive. The Abkhaz side has already put forward its proposals for overcoming the crisis situation and increasing the dynamics of the Geneva process,” the minister said.

At the previous round of Geneva Discussions, the Abkhaz side again proposed that it is essential to amend the format of the participation of the sides in order to grant them official status.

“We have specific proposals to the Abkhaz side in order to overcome the crisis situation that arose during the previous talks. We will make every effort to give more positive impetus to the Geneva Discussions process, and we hope that 2013 will be the year of achieving peace [and] stability in the region and the year we succeed in resolving contentious issues,” said EU special representative for the region Philippe Lefort.

The meeting then continued behind closed doors. The sides touched on the problems of ensuring the right of freedom of movement for citizens of Abkhazia, the humanitarian situation in the region, the need to demarcate the Georgian-Abkhaz frontier along the River Ingur, and a whole series of other problems of interest to the participants.