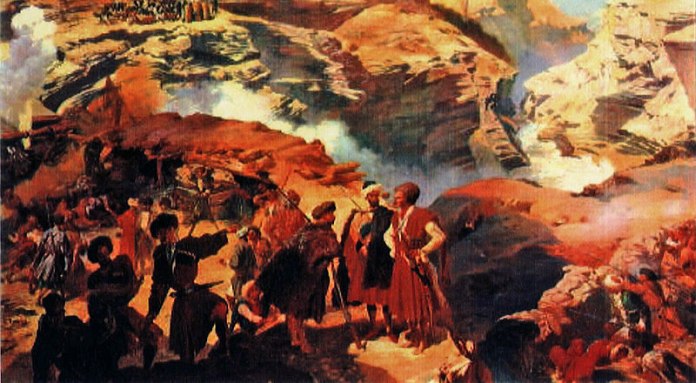 In the suppression of the last pockets of resistance in the Caucasus, Georgian militia, loyal servants of the autocratic state, played a significant role. Together with the Russian troops, they took part in the victory parade at Krasnaya Polyana on 21 May 1864. And on 9 June, as a crowd gathered, Tiflis Marshal of the Nobility, Dmitri Kipiani, greeted the Governor of the Caucasus, Grand Duke Mikhail Nikolaevich Romanov, with the words:

"Your Imperial Highness! You have completed the conquest of the Caucasus and have thus incorporated in history an event of enormous importance that is inseparable from your name. Persons selected by the Georgian nobility bring your Imperial Highness congratulations in the name of all social classes."

In June, the autocratic state abolished the Abkhazian monarchy and instituted a temporary "military-national administration." Thereafter, Abkhazia was renamed the Sukhum Military Department of the Russian Empire. General P. N. Shatilov became Head of the Department on 12 July 1864.

- Many Georgians were eager to take advantage of the privileges associated with imperial service, associate themselves with Europe's notion of progress, and also distinguish themselves from nearby rival and Islamic peoples such as the North Caucasus mountaineers.[1]

- Service records from the imperial era left in what has recently been renamed the Georgian National Archive illustrate the important role played by Georgians in various wars against both mountaineers and the Ottoman Turks.[2]

- Colonel Giorgi Tsereteli from Kutaisi, for example, not to be confused with the writer and sometime theater critic referred to later in this article, managed to survive fighting in Chechnia and Dagestan from 1855-59, service on the Lezgin Line after the conquest, and combat in the war of 1877-78 against the Turks. In 1876 he helped put down a rebellion in Svanetia.[3]

- After the conquest, a Georgian was considered sufficiently reliable to administer troublesome Dagestan oblast¢ in the 1880s.[4]

- Tbilisi served not only as the base of imperial administration and a growing imperial educated society, but also as an anchor for the Russian military in their prosecution of the long Caucasus War.[5]

- Tbilisi was host to important innovations in Russian imperial policy. The well-known geographic, ethnic, and religious complexities of the region perhaps contributed to a general willingness on the part of Russian officialdom to innovate in its administration of this frontier. Tsar Nicholas I himself lost patience with the seemingly interminable war and granted extensive authority to Prince Vorontsov, an unusually powerful and independent figure in the imperial administration. As Anthony Rhinelander has explained, Vorontsov was experienced in the borderlands and well-acquainted with the Caucasus, where he began his military career as an adjutant to Georgian Prince P. D. Tsitsianov (Paata Tsitsishvili) in the early 19th century.

The Dilemmas of Enlightenment in the Eastern Borderlands: The Theater and Library in Tbilisi, by Austin Jersild and Neli Melkadze

[5] On the war and Sufism in the North Caucasus, see Moshe Gammer, Muslim Resistance to the Tsar: Shamil and the Conquest of Chechnia and Daghestan (London: Frank Cass, 1994), and Anna Zelkina, In Quest for God and Freedom: The Sufi Response to the Russian Advance in the North Caucasus (New York: New York University Press, 2000).