This drawing was done in Sochi in 1841 and reflects the actual events of this year. In the centre stands an elderly prince in a white cherkesska. This is the Abkhazian prince Arslanbey Gechba, an outstanding political figure and influential representative of the Gechba princes, who owned the seaside part of Sochi.

At the end of the XVIII century. Arslanbey Gechba was the Sukhum ‘Naib’. The personality of this prince was confirmed in his own hand by G. Gagarin on one of the sketches for this drawing.

On the far left is the outstanding political activist Maan Katz. He was the first minister at the cort of the ruling prince of Abkhazia. In the Russian service he reached the rank of Major-General. He was a resolute commander, a flexible diplomat, a sociable and perspicacious interlocutor, a cruel suppressor of any insurrection.

The low-ranking aristocrat with the pointed beard was Ali Ahmet, the prince of the Aubla clan and the ruler of Sochi. 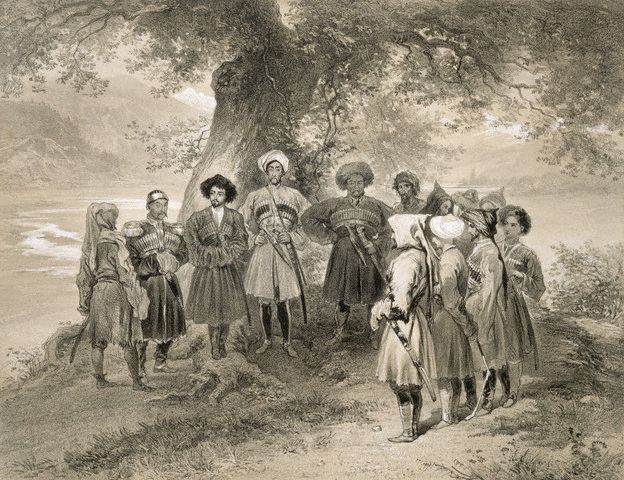 To the right of Prince Arslanbey Gechba is Prince Zoskan Amarshan. He hailed from Dal, a remote region in the centre of Abkhazia. He was a supporter of the Russians and signed the oath made to the Russian Tsar in 1837. He was killed on 7 October 1841 in a battle with the Abkhazians who were opponents of Russian power.

From the back the young prince Rostom Inal-ipa is looking out. He belonged to the clan that owned the lands in the lower reaches of the river Bzyp. The young Prince Rostom Inal-Ipa grew up in the house of his ‘atalyk’ [foster-father], Khadzhi Kerantukh, the leader of the Ubykhs.

This article was published by Adygi.ru and is translated from Russian.