Immediately after the Caucasian War (21 May 1864), in June 1864 the independent princedom of Abkhazia was abolished, and the sovereign prince Mikhail Shervashidze (Chachba) was subjected to political repression; in 1866, he died in exile in Voronezh.

The abolition of Abkhazian statehood, the renaming of Abkhazia as the "Sukhum Department" under a "military-national government", the introduction of direct imperial administration and the death of the last ruler of Abkhazia, all this caused great dissatisfaction among the people and led to the Lykhny (Abkhazian) Uprising in 1866 and the massive forced resettlement (Makhadzhirstvo) of the Abkhazians to Turkey in 1867.

In 1877, there broke out in Abkhazia a new insurrection. Similar uprisings occurred at that time in Daghestan and the Terek Region; they were closely related to the events of the Russo-Turkish war of 1877-1878. In early May 1877, the Turkish fleet bombarded the coast of Abkhazia and landed a contingent of troops in Sukhum which consisted mainly of Abkhazian Makhadzhirs.

The Head of the Sukhum Department, General Kravchenko, on the eve of this attack, ordered the abandonment of the city, thereby depriving the population of central Abkhazia of necessary defence. The behaviour of the General pushed the Abkhazians to come out on the side of Turkey. A monk-chronicler from New Athos wrote as follows: "Kravchenko not only made no preparations to defend the city but even withdrew his troops from it." Immediately after the surrender of Sukhum, General Kravchenko was recalled to Tbilisi. In Abkhazia, only the Samurzakan (now the Gal) District) remained under the protection of Russian arms.

As a result of military operations, up to 50,000 Abkhazians were forced in 1877 to abandon their homeland and relocate to Turkey. The new head of the Sukhum Department, Colonel Arakin, reported on 24 August 1878: "The area that lies between the River Galidzga and the River Kodor is already shewing significant traces of devastation: the area around Ochamchira is razed to the ground ... The expanse from the R. Kodor all the way to the Gudauta area, together with Tsebelda, is almost a perfect desert. " Sukhum and Gudauta were torched and ruined.

Colonel Arakin proposed to declare the entire Abkhazian population "guilty", because "to determine the degree of involvement in the mutiny of each community and of individual persons through an investigation would require too much time." As an advocate of measures "of a punitive character", he thought it necessary to "group together" the Abkhazian population, thus violating the traditional farmstead-character of the way that the Abkhazian peasantry had settled on the land. Fortunately, this point was not implemented.

Abkhazians were forbidden to carry arms, to settle near the coast (except for the upper classes), or live in Sukhum, Gudauta, Ochamchira. The devastated central part of Abkhazia between the rivers Psyrtskha and Kodor became a colonised land-fund of the imperial administration. There was established here a kind of buffer-zone between the Gudauta and Ochamchira Abkhazians. Abkhazians had no right to settle in this part of their own country. Meanwhile, thousands of Armenians, Mingrelians, Greeks, Russians, Estonians, Germans, Moldovans and others who were resettled began from 1879 to take root here in today's Sukhum and Gulripsh districts. Thus, in the aftermath of the Russo-Turkish war of 1877-1878 and the huge outward flow of the Makhadzhirstvo [Great Exile], the ethnic situation in Abkhazia changes dramatically: from being homogeneous, basically mono-ethnic in its composition, it turns into a cosmopolitan region.

The active expulsion of Abkhazian rebels to the interior-provinces of the Russian Empire as political exiles went on throughout 1877-1880. At this point the following should be noted. The Abkhazians were deemed "guilty" from 1877, but officially it was by an order of the tsar of 31 May 1880 that their "guilt" was recognised. Henceforth, the peasants of the 22 communities in the Gudauta and Kodor districts (with the exception of the Pokvesh and Ilor communities) were restricted in their rights to land-tenure, were subjected to an increased tax, and "because of their low political reliability "were not recruited into the army ... The population of the 12 communities of the Kodor and Samurzakan areas was deemed to be "innocent".

Soon after the war, an administrative reform was carried out: The "Sukhum Military Department," which was equal, in fact, to a province [gubernia], in 1883 was renamed the "Sukhum District" (and remained so named until 1919) .

From the 90s of the XIX century, tsarism begins to conduct a new policy with regard to the indigenous population of Abkhazia. It abandons the brute force, so characteristic of the period 1810-1880, and the policy of "the stick" turns into the policy of "the carrot".

The Abkhazian people did not participate en masse in the revolutionary movement of 1905-1907. Statistics on the court-proceedings for the Sukhum District show that of 46 revolutionaries convicted only five were from Abkhazia. The bulk of the revolutionaries were agitators who had come from elsewhere and peasant-labourers from Guria and Mingrelia who had come in from Western Georgia for temporary work at different points along the Abkhazian coast.

The "silence" of the Abkhazians in 1905, who then made up half the population of the district, was caused not only by their "guilt" but also by their lack of understanding of the political objectives of this revolution. The Abkhazian farmer, who pursued subsistence-farming, who lived in a circle of patriarchal traditions, and who was not involved in trade, daily work, or seasonal occupations, considering these activities to be "shameful", was unable to fathom Marxism and social -democratic ideas. Among the Abkhazians there were no indigents and no proletarians.

In 1906, one of the leading newspapers, "Purlieus of Russia", declared: "Socialism has not yet taken root among the Abkhazians, and for this reason one can live with them." And in 1910, the son of the last ruler of Abkhazia, GM Shervashidze, remarked: "Then something unexpected happened. How did it come about that the Abkhazians, 'known insurgents', were suddenly sitting quietly, when Russia was in turmoil? You don't understand these scoundrels at all. Always doing a something that you never expect. But this is very simple, say the wise officials. The feudal system still survives amongst them ... Revolutionary propaganda has met no success here because here there is no class-strife ".

The Abkhazian peasantry perceived the events of the Russian revolution in Abkhazia as a "Georgian" revolution and viewed with distrust those who had recently occupied the lands of their brethren, the Makhadzhirs, and now appeared before them in the role of revolutionary agitators. The main driving force of the revolution in 1905 in Abkhazia were settlers who had relocated from Western Georgia: land-tenants, merchants, labourers, porters, etc., Angry that they were considered temporary residents of the Sukhum District.

Telling is one of the demands of the Abkhazian people with which, in October 1906, candidate for deputy in the IInd State Duma, Prince PL Shervashidze, appealed to the Viceroy in the Caucasus: "Suspend the colonisation of the Sukhum District by new elements, as only the indigenous population can be satisfied with the available free lands, in view of there being an insignificant number of them. "

The imperial administration in the Caucasus tried to make use of the distrust and tension prevailing in Abkhaz-Georgian relations in 1905 in the spirit of a policy of "divide and rule."

About three decades had passed since the time when the Abkhazian people had been deemed to be "guilty". In May 1906, it was specifically emphasised in the Council of the Viceroy in the Caucasus: "During the events of recent months, the population of Abkhazia, carrying the title 'guilty', stood out by reason of its loyalty to the Government, as compared both with the population of neighbouring regions and with the immigrant element in Abkhazia ".

In December 1906, the proposal to lift the "culpability-charge" from the Abkhazian people was supported by the Chairman of the Council of Ministers, Russia's Interior Minister Pyotr Stolypin, and, on 27 April 1907, Nicholas II approved the proposal put forward by the Government "On equalising land-tenure rights of the inhabitants of the Sukhum District" and cancelled the imperial commandment of 31 May 1880. Thereafter, parcels of land were allotted to the residents of the "guilty" communities with right of ownership. The Tsar's Viceroy ordered General Pavlov and member of the Viceroy's Council, E. Vejdenbaum, to the "Sukhum District for the solemn announcement to the population of His Highness' commandment on the restoration of their rights to the guilty Abkhazians who participated in the uprising of 1877."

After a solemn prayer in the ancient Lykhny church, coincidentally on the birthday of the Empress, General Pavlov and Vejdenbaum announced on 25 May 1907 the Tsar's pardon under the title "To the population of the Kodor and Gudauta areas of the Sukhum District".

This document contained the proclamation of the withdrawal of the "culpability-charge" from the Abkhazian people, and it was said that "in the troubled times of 1905 ... the Abkhazians passed the test with honour."

Stanislav Lakoba
Professor in Archeology, Ethnology and History at the Abkhazian State University. 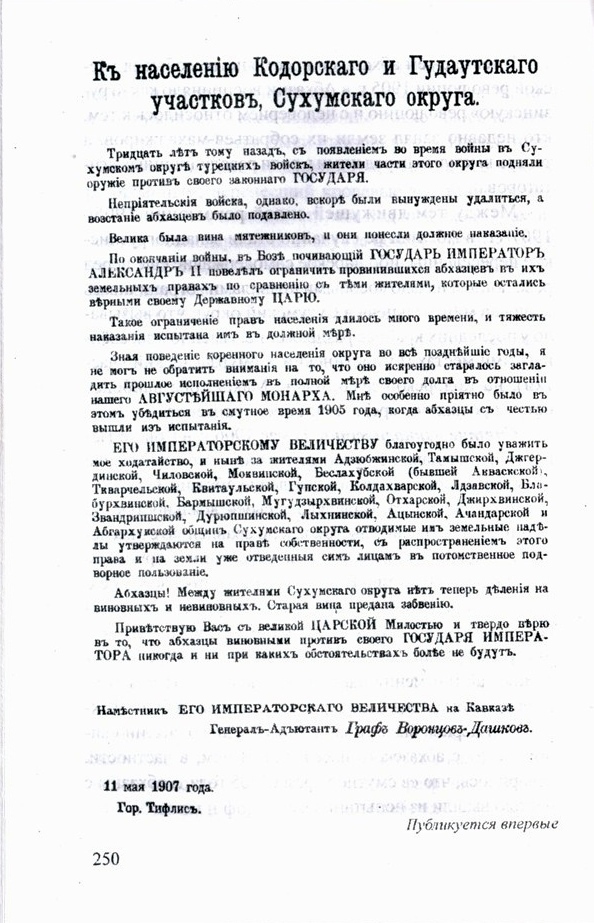