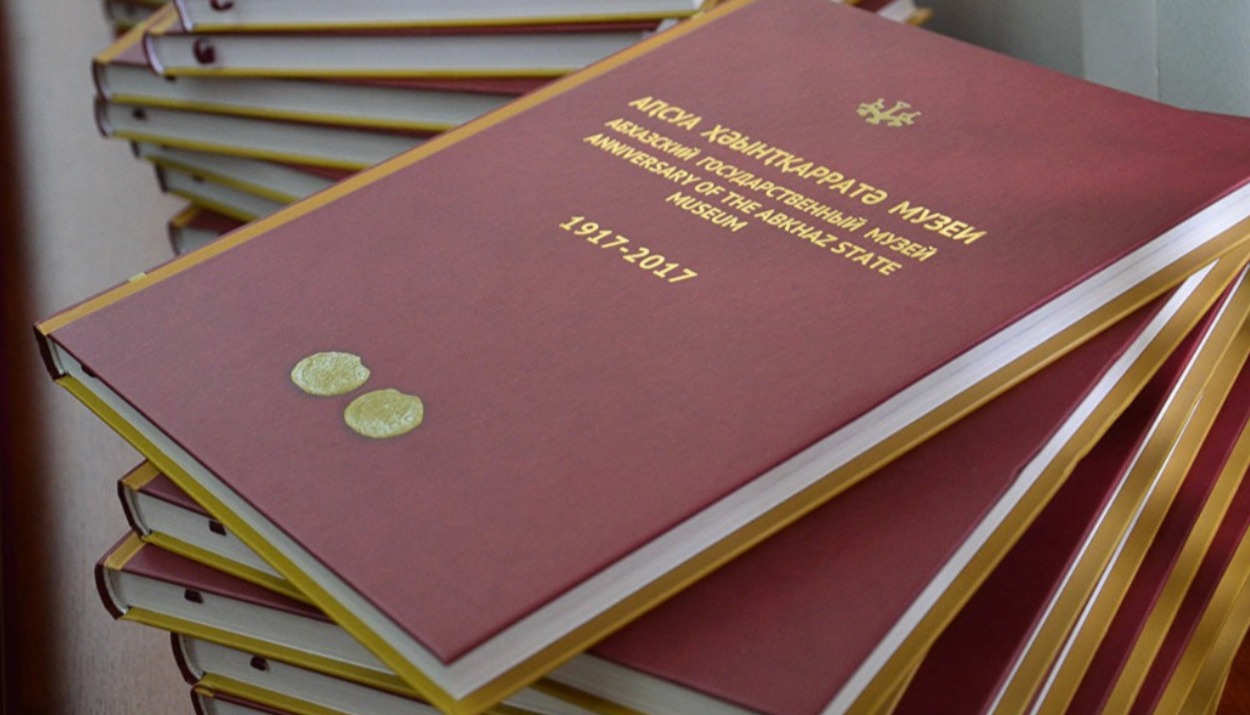 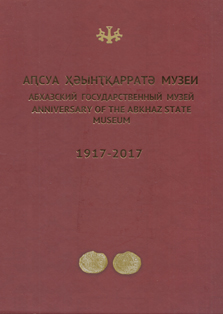 The «Abkhazian State Museum (1917–2017)» booklet offers its reader an insight into the history of the museum and how it became a scientific, research, cultural and educational center, a repository of natural history artefacts, the material and spiritual culture of Abkhazians – an ethnos inhabiting the territory of Abkhazia since ancient times – known as Apsny (the land of the soul).

The authors of the booklet sought to harmoniously combine the well-known coverage of the history of Abkhazia without losing any of its scientific value.

In the early 60s of the 19th century at the initiative of Abkhaz history and culture enthusiasts, and under the leadership of the Head of the Sukhum Okrug, Colonel A. N. Vvedensky, a collection was initiated for the establishment of a local history museum in the city of Sukhum.

Unfortunately, before the beginning of the Russian-Turkish war (1877–1878), the most valuable artefacts of natural history, archaeology and ethnography were forever lost to Abkhazia.

In 1900, a prominent researcher of the Black Sea coast and Abkhazia, V. I. Chernyavsky, raised the subject of establishing a museum in the city of Sukhum in two letters to Prince G. S. Golitsin, who was at that time the Governor of Transcaucasia.

The subject of opening the museum was raised once again in 1913 at the initiative of a group of agronomists, foresters and teachers, who proposed a project to establish a society for the collection of material and the study of the history of the region.

The first general meeting of the members of the Society of Enthusiasts and Researchers of Nature and the Population of the Sukhum District was held in the first half of 1915 in Suhum. The members included A. V. Sinitsyn (Chairman), B. Kiselev, V. Kozlov, V. Semashko, B. Zakharov, D. Grandilevsky and V. Krastelevsky.

During this period, begins an intensive collection of material for the creation of a local his- tory museum. In its first years, the museum was located in a damp, small and uncomfortable room belonging to the District Administration (now the Police Department).

In 1916, at the behest of the members of the Society of Nature Enthusiasts and Researchers of the Sukhum District, the Sukhum City Administration allocated a grant in the amount of 500 rubles to the museum, which made it possible to hire a dry two-chamber space for the museum in the Bishop’s House (now the Abkhaz State Museum). This was reported in a newspaper, the Sukhum Herald, on January 24, 1916. The official opening of the museum took place on May 17, 1917.

In 1916, a prominent representative of the Abkhaz intelligentsia, D. I. Alania (repressed in 1937) wrote about the invaluable benefits that the museum could bring to the studies of the region.

At the end of 1920, during a period of Georgian Mensheviks in state power in Abkhazia, the Society of Nature Enthusiasts and Researchers of the Population of the Sukhum District was disbanded, consequently, the museum was closed, and the exhibits were relocated by the Mensheviks to Georgia.

After the establishment of Soviet power in Abkhazia, local ethnographic studies resumed. In August 1922, the «Abkhaz Scientific Society» was formed in Sukhum.

G. P. Barach was the Chairman of the Abkhaz Scientific Society and the first director of the museum. He oversaw the creation of an exposition dedicated to nature, history and ethnography of Abkhazia and the publication of 4 issues of the Society’s collection of works.

The ten-year activity of the Abkhaz scientific community played a big role in the development of scientific thought in the republic, and made a significant contribution to the study of the region and its productive forces. The questions posed in some of the works of the Society’s members have not lost their relevance and still require completion.

In 1928 the museum was transferred into the system of the National Commissariat of Education of the Abkhaz SSR and received the status of a State Museum. At the initiative of the museum’s director, F. A. Ashibokov, the museum opened a General History department, a Revolution History department and a transportable exhibition named «11 years of Soviet power in Abkhazia».

In 1933 I. E. Adzinba was appointed the director of the museum. Under his leadership, work continued to replenish the funds of the Revolution History department with exhibition themes such as «The Revolution of 1905», «February in Abkhazia of 1921», «42 days of Soviet power in Abkhazia», «Mensheviks in Abkhazia» and, for the first time under the roof of the museum, a complex exhibition of the «Abkhaz yard».

1937 did not bypass our museum, as many of the most valuable documents were removed from the funds.

In 1937 the museum was headed by the archaeologist L.N. Soloviev, who built a huge collection of archaeological material from more than 40 settlements in Abkhazia (Yashtkhua, Byrtskhi, Eshera, Tsabala and other places).

During the Second World War (1941–1945), Abkhazia produced 22 Heros of the Soviet Union. And the military theme was widely covered in the exposition of the Abkhaz State Museum.

Since the 1960s the relations between the Abkhaz State Museum and its counterparts in Moscow, Leningrad, Kiev, Minsk and other cities of the Soviet Union became ever closer. A great contribution to the museum’s studies was made by its directors: E. K. Gabelia, A. H. Argun, Yu. G. Argun, A. M. Tariya.

In 1977, in honor of the 60th anniversary of the Great October Revolution, the Museum of Ethnography of the Peoples of the USSR in Leningrad hosted an exhibition entitled «Abkhazians – Life and Art», where over 300 items from the collection of the Abkhaz State Museum were exhibited. The exhibition received high praise from the Leningrad public.

In 1978, the Abhaz State Museum was awarded the first category by the collegium of the Ministry of Culture of the USSR.

The museum continued its work in the departments of Natural History, Ancient and Medieval History, the History of the 19th century, the History of the Soviet Period, Ethnology, as well as departments of foundations and scientific propaganda. The museum had branches at the Novy Afon Panteleimon Cathedral, the Picture Gallery in Sukhum and the memorial museum «Yasochka» in the Gulripsh district.

Some of the main tasks in the activity of the museum are the collection of material (expeditions and excavation trips), processing, studying and storing the collected valuables and the constant replenishment of the funds.

For the purposes of promoting the history of the region, the museum staff often travelled with thematic exhibitions around the cities and regions of Abkhazia, as well as beyond to Karachaevo- Cherkessia, Kabardino-Balkaria, Adygeya, the Sochi and Adler areas of the Krasnodar District.
Many pieces stored in funds and exhibited in the halls of the Natural History, the Ancient and Medieval History, Ethnology and Modern History of Abkhazia departments are of not only national but also worldwide significance.

In the years of the Abkhaz national liberation movement against the criminal policy of the Georgian leadership, a significant contribution was made by the staff of the Abkhaz State Museum, namely Yu. G. Argun, A. N. Abregov, I. R. Marukhba, E. K. Ajinjal, T. Sh. Gitsba, N. K. Shenkao and V. G. Avidzba.

The Patriotic War of the people of Abkhazia (1992–1993) did not pass the museum by, as the staff of the museum courageously defended their Motherland: M. Kh. Khvarckiya, D. A. Mikvabiya, R. S Tsushba, A. S. Aguma, V. Sh. Akhuba, B. F. Berulava, L. Sh. Enik and R. Kh. Gwindzhia.
The war caused irreparable damage to the collections of the museum. However, collecting activities to replenish the funds continued.

In the 100 years of its existence, the museum has collected more than 250 000 exhibition items that are of great importance to the historical and cultural heritage of the Republic of Abkhazia.

After the Georgian-Abkhaz war, when Abkhazia was in a difficult economic situation, the First President of Abkhazia V. G. Ardzinba found financial means to repair the building, which helped the museum staff to continue their research work.

Thanks to President A. Z. Ankvab in 2010, the construction of the museum was completed in 2012.

On July 15, 2014, after major repairs and exposition works, the doors of the Abkhaz State Museum were re-opened.
Today, the museum has a large stream of visitors: representatives of the academic world, guests from the far and near abroad, schoolchildren, students, military personnel, many vacationers wishing to immerse themselves in the atmosphere of the past and present of our country.

All four departments are presented with new expositions. Now the museum staff have the space to conduct thorough and painstaking scientific work. The museum’s funds continue to be replenished with new interesting and rare exhibition pieces.

The museum has employed many young staff members, who will continue the museum’s traditions in research and collecting activities for further study and preservation of the richest history of Abkhazia. After all, the relics, objects of material and spiritual culture presented here characterize the history of the country and the ethnic originality of its population.