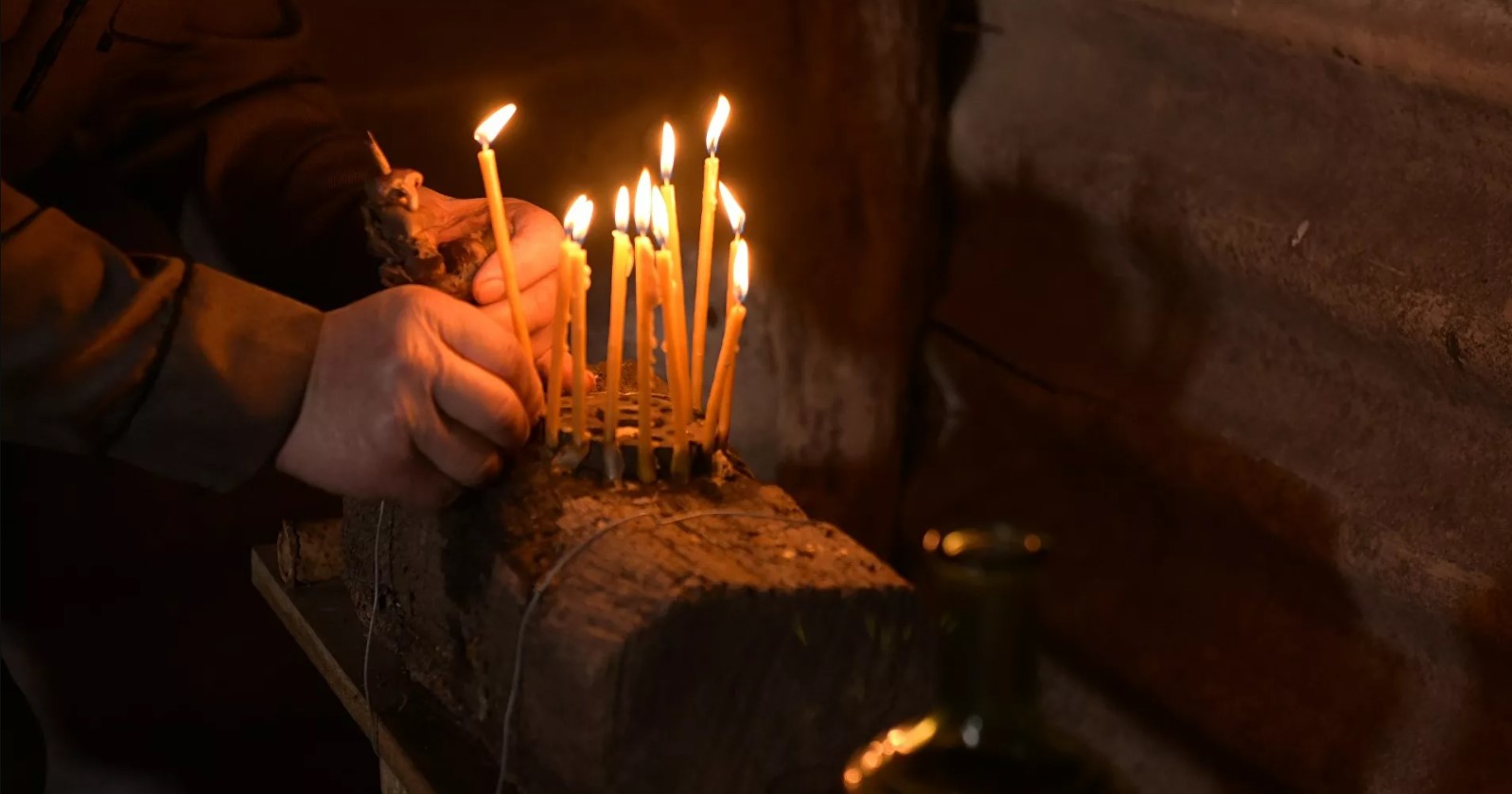 The festival of Azhyrnyhwa with its divine patron Shashwa, one of the most ancient, archaic deities in the Abkhazian pantheon, occupies a special place in the traditional ethnic religion of the Abkhazians. The history of this festival takes its origin from the Bronze and Copper Age and was once associated with metallurgy, metal-working, blacksmithery, and the religious cults and rituals associated with them.

Marina Bartsyts is an anthropologist from Abkhazia.

In the traditional Azhyrnyhwa rite of prayer, the connection between myth, ritual, and the festival is traced. In the folk-philosophy of the Abkhazians, all natural phenomena and all human activities are considered in a global wholeness and interconnection.

As is well-known, the goal of any festival of creation and the New Year is the transition from Chaos to Harmony. The transition is possible through ritual, through celebration. A festival as an act of solemn renewal of life requires a stop, a special form of behaviour that is different from everyday-life, with its own norms, responsibilities, when every little thing, deed, word, action is significant. This is an interrupted time that requires a special attitude towards itself in order to continue.

The transition is possible through ritual, through celebration. A holiday as an act of solemn renewal of life requires a stop, a special behavior that is different from everyday life, wis an interrupted time that requires a special attitude towards itself in order to continue.

If we turn to the etymology of the Abkhaz word anyhwa ‘festival’ [in Russian prazdnik] – well it means ‘prayer’­, accompanied by joy and merriment (for comparison, the Russian word prazdnoe ‘idle’ is ‘free from work’). In the festival all aspects of the culture and everyday-life of the people, from religious beliefs to economic activities are reflected. This is the time when half-forgotten mythological representations and cults come to life.

The Kalends festival-tradition is transformed depending on the socio-economic, political, socio-cultural conditions. Without a doubt, it can be argued that crises, long wars, mass-eviction (the makhadzhirstvo [Great Exile] of the 19th century, which was so catastrophic for the people – N.B.), colonisation, collectivisation, and the atheism of the Soviet period led to a simplification, impoverishment of the culture of the festival, sometimes so much so that in some cases only fragments of the celebration remained. In addition, unfortunately, the Kalends customs and rituals of the Abkhazians belong to the number of insufficiently studied sections of ethnography. 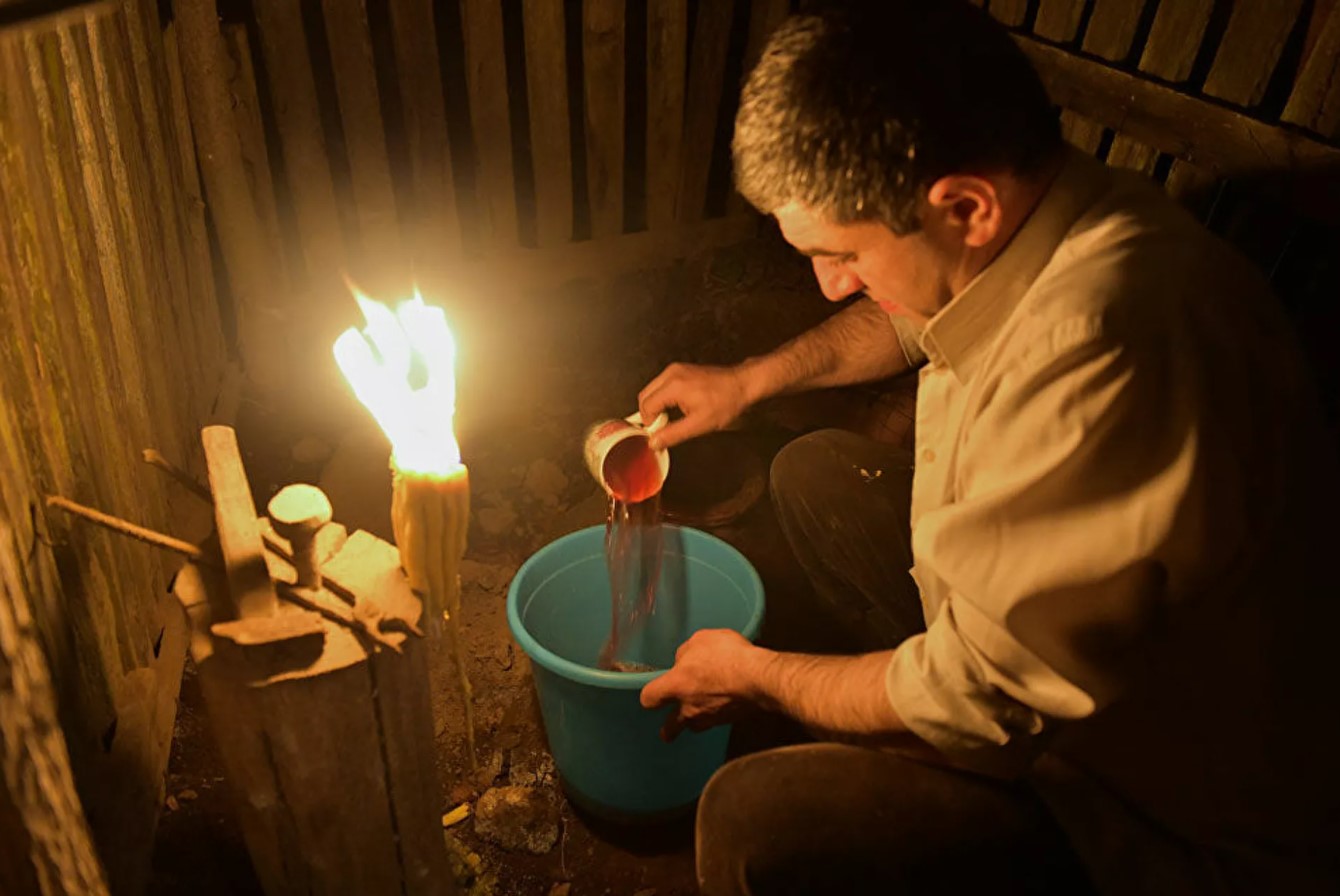 Be that as it may, thanks to the traditionalism and conservatism characteristic of Abkhazian culture, archaic ritual and ceremonial practices with a thousand-year history, like Azhyrnyhwa, have survived to this day. And today it opens the winter-cycle of the traditional familio-clan Kalends rituals of the Abkhazians. This holiday is celebrated on the night of 13-14 January, that is to say 1 January according to the old style (viz. according to the Julian calendar, replaced by the Gregorian calendar in 1918).

If a family has a smithy as a sanctuary and its main attributes (anvil, hammer and tongs), then prayer is most often held on special days (azhiramSHy) – mainly Monday and Thursday, although there are exceptions. For example, the Kvaratskhelia family in the village of Duripsh hold it on a Wednesday, whilst for some it takes place on a Friday and other days. Frequently encountered discrepancies and lack of complete uniformity of this rite are associated both with family-history (how they became ‘tributaries’ of the smithy – N.B.) and with the family-character of the ritual itself.

Speaking about the New Year in general, in the course of historical development neither the date of the New Year nor the forms of the festive-rituals of the Abkhazians have remained unchanged.

It seems to us that the most archaic New Year's festive-cycle of the Abkhazians took place at the end of the winter-period, on the eve of spring, like most of the peoples of the world. The holiday began in the last month of winter (from February to March – N.B.) - this is a ritual cycle of prayers “dzhabran”, "zhwabran”, ending with the prayer "xwazhwk’yra". Perhaps, earlier the festival in terms of time ended by the day of the vernal equinox in March.

With the onset of spring, a new economic year began, and by this time all the ritual activities related to caring for fertility, breeding livestock, and the well-being of people were carried out.

As for the Azhyrnyhwa prayer (or often called Xjachxwama in Bzyp Abkhazia), which we are talking about today, it is associated with the sevenfold deity of the cult of the smithy and the blacksmith's craft Shashwy (Shashwy-abzhnyxa ‘seven shrines’), Shashwy-axjahdu (‘great golden lord’), and refers more to the period of the winter-solstice.

That is, if the cycle of prayers to the no less ancient sevenfold deity Aitar ends by the spring-solstice, then the prayer to the sevenfold deity Shashwy, most likely, was associated with the winter-solstice. On the eve of the New Year according to the lunar calendar, "but many on their first sacred day, and that certainly towards evening", emphasizes the ethnographer NS. Dzhanashia. 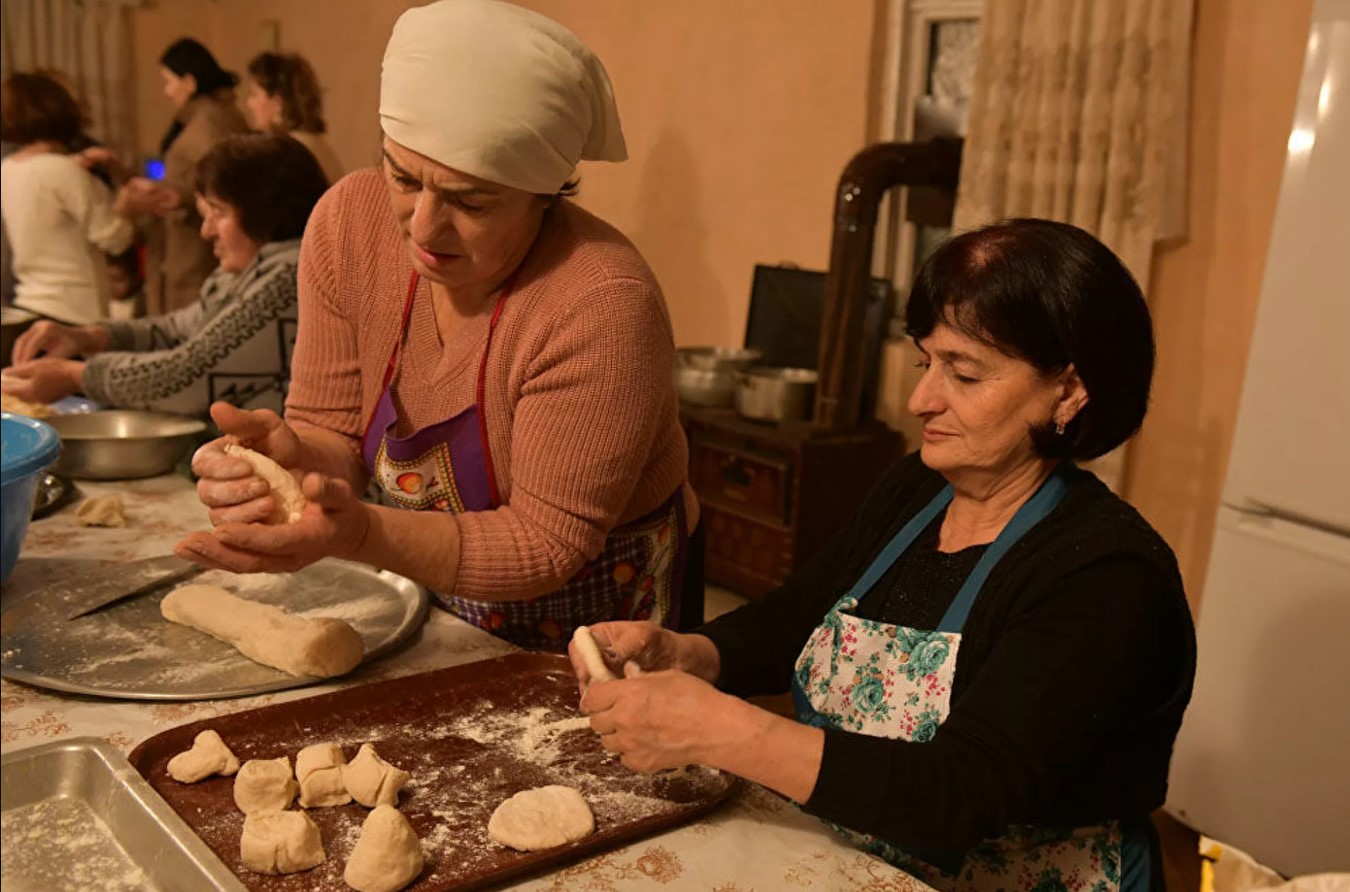 Any festival has its own sacred time or makes this time such and requires an appropriate sacred space. I would like to draw attention once more to the importance of the calendar-date also because over the last few years, in programmes and publications (not scholarly ones!), it has mistakenly begun to be said that the Azhyrnyhwa prayer can be carried out throughout the whole month, whenever it pleases, referring in this regard to the fact that the month itself is called Azhyrnyhwa. Then, according to this logic, it turns out that other calendar-festivals of the Abkhazians AmSHap (Easter), Nankhwa, Zhwabran can be held on any day of the month of the same name.

The uniqueness of the Azhyrnyhwa festival-prayer is that, unlike the overwhelming majority of our traditional rituals, it is associated with the moon, and not the sun, although, as noted above, it may have once been related to the time of the winter-solstice.

We are talking about the solar-lunar symbolism of the festival dedicated to the smithy-deity Shashwy. All preparations and sacrifices (slaughter of a goat, roosters – N.B.) take place in the evening, before and after sunset. Prayer takes place at moonlight and should be completed before moon-set.

On the link between the Abkhazian festival-prayer under examination and the cult of the moon Nikolai Ja. Marr wrote: "... it fell on, or was adjusted to, the new moon and began with the ascent of the moon. Those who went to the smithy to pray would say: ‘The moon will lead us to the smithy.’ The prayer had to end before the sunset of the new, young month. Illumination by the moon is considered auspicious for prayer.” Judging by the materials from the archive of Nikolai Marr, this observation about the smithy was recorded by him in 1913 during a trip to Abkhazia.

The ethnographer G. F. Chursin recorded in the 1920s in the village of Achandara that among the Abkhazians: ‘A year's prayer in the smithy is arranged in such a way that it can be completed before the moon sets. And still, if they do not manage to carry out the entire rite under the moon-light (once in a while it is not necessary – N.B.), we can hear from the elders: Amza hananamgeit’ (‘the moon did not get us there’).’ 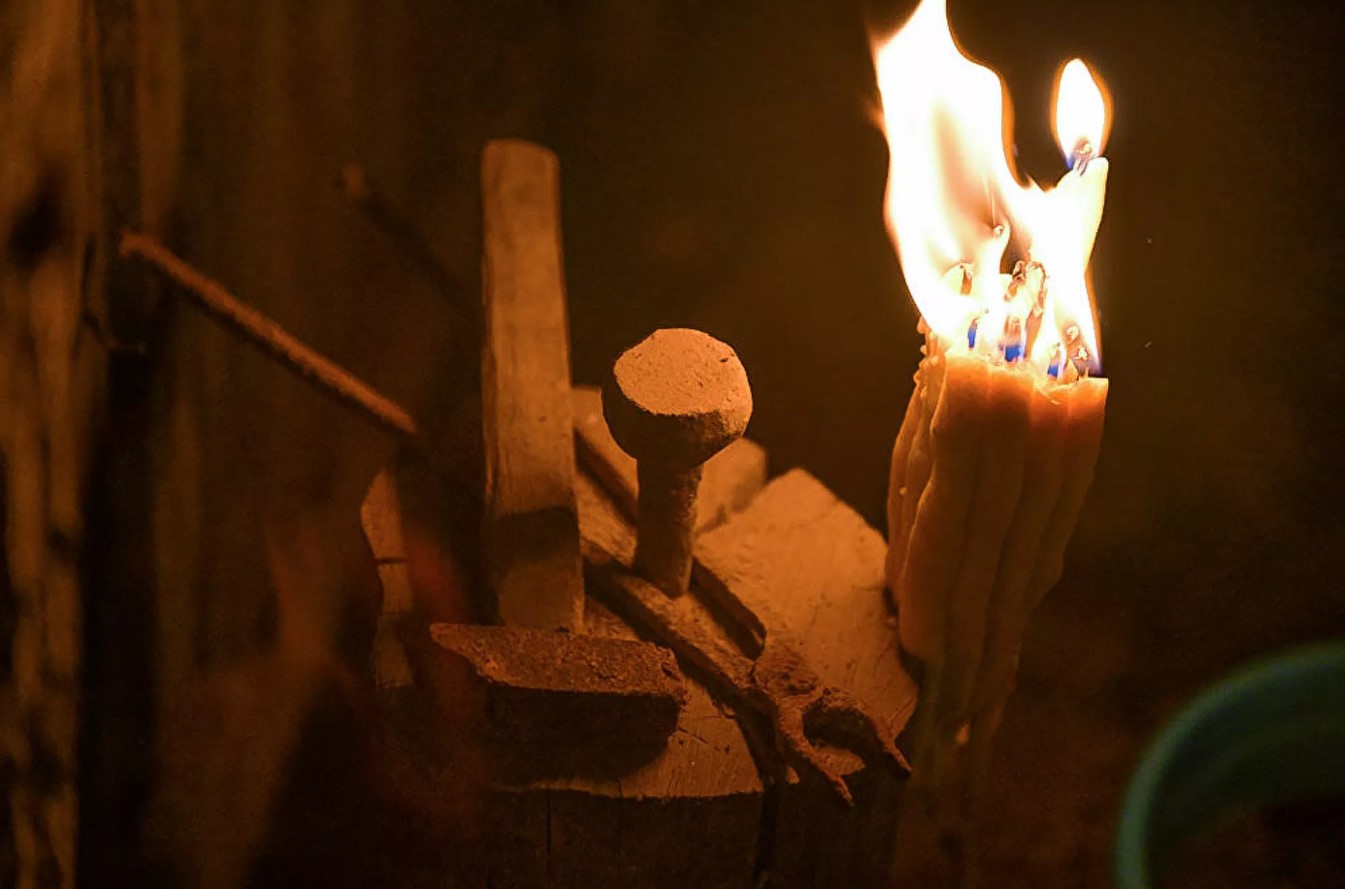 In his wonderful article on this topic, the historian Vladislav Ardzinba emphasizes that the time of the Azhyrnyhwa ritual according to the lunar calendar in Abkhaz echoes with such sounds as aSHykwseijwySHara ‘the time of division of the year’, amSH az.hara ianalago ‘when the day begins to grow’. According to the mythological ideas of the Abkhazians, the beginning of the increase in the length of the day on 14 January is associated with the fact that the Lord throws heat into the sea the size of a stone burnished (burnished for millet – N.B.). "Lahwarak jaq’arow apxara Antswa amSHyn jalajyzhweit’ [God casts heat the size of a threshing tool into the sea]," V. Kvitsinia writes in his manuscript.

In this regard, it is noteworthy that in 2018 in the village of Otkhara, Gudauta Region, in the family of Boris Ajba, we recorded an already rare part of the Azhyrnyhwa ritual-cycle, a ritual that is held in the morning on the day of prayer and which is called Apkhynnyxwa, that is ‘summer-prayer’.

Since 1994, the 14th January in Abkhazia has been officially marked on the calendar as the Azhyrnyhwa festival day-of-rest, the Day of the Renewal (Creation) of the World.